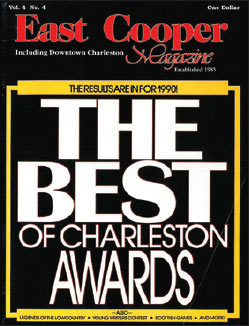 I can vividly remember when we first started the “Best of ” voting. Long before cell phones became smart phones, nine years before Google was born and five years before Amazon became part of our everyday world, we published the first Best of Charleston within the pages of Mount Pleasant Magazine’s predecessor East Cooper Magazine in 1989.

At the time, Mark Zuckerberg was only 5 years old, the internet and social media were not a part of our conversations yet. There was no convenient way to generate our Best of Charleston votes except at multiple locations where we would drop off boxes with lots of paper ballots and pens – the good old-fashioned way.

Below are the results from the 1990 Best of Charleston, which was published in East Cooper Magazine, Vol. 4 No. 4. If you want to share with family and friends BestofMP.com/BestofCharleston1990. – By Bill Macchio 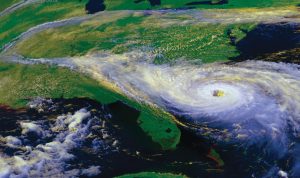 Best Moment of the Year
We had a record-breaking year for best moments in 1989. Beyond a shadow of a doubt, the best moment for the majority of Charlestonians was when Hugo left the area. A close second was when electricity was restored to homes. And it seems that weather dictated our moods this year, because the third best was our White Christmas.

Charlestonian of the Year
There is no doubt about it: Although many of you listed all of Hugo’s Heroes, Mayor Joe Riley won hands down as Charleston’s main hero, before, during, and after Hugo.

Charlestonian You’d Most Like to Meet
Charleston’s top cop, Reuben Greenberg, is the one most people would stand in line to meet. And there are a lot of folks out there who would like to shake Joe Riley’s hand too.

Best Local Male Sex Symbol
Warren Peper seems to be the sport with the best “pep”, although one woman named her husband of 28 years.

Best Local Female Sex Symbol
Local libidos leaped over Leslie Lyle this year, while one man named his wife (for fear of injury, he wrote).

Best Area Writer
Frank Gilbreth, alias Ashley Cooper, penned his way into your hearts with his “Doing the Charleston” column in the News & Courier. Pat Conroy was the prince of local writer royalty.

Best Area Artist
The readers we canvassed stroked another one up for Steven Jordan.

Best Area Photographer
If a picture speaks a thousand words, then John Dunne and Ron Rocz speak the most eloquently to our readers.

Best Area Musician
Seems your tastes run from classical to jazz. Maestro David Stahl and Lonnie Hamilton were the two you most like to listen to. 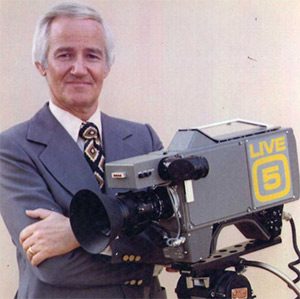 Best Local Radio Personality
“King” Mark Cardnella is the one most of our readers elected to the top of this hit parade.

Best Restaurant Overall
Again, you voted that “Nothing could be finer” than to be at Carolina’s downtown on Exchange Street.

Best New Restaurant
The “J’s” have it! Jimmy Lou’s and Josie Joes, both in Mt. Pleasant, tied for the best new places to meet and eat.

Best Bar
The names most written on cocktail napkins were in Henry’s and Myskyns, both downtown.

Best Happy Hour
Seems the happiest folks in town are found at San Miguel’s (downtown and in North Charleston) and The Jukebox (downtown). 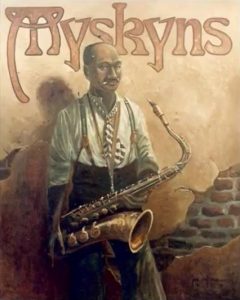 Best Night Spot
Petula Clark would be happy about this: all of our best night spots are downtown. Myskyns brings out the best in Charleston night life, with Henry’s and Top of the Market as the closest contenders.

Best Ice Cream
No matter how you spell it, Haagen Dazs on Market Street was your favorite flavor of the year. Swenson’s, also on Market, was a close second.

Best Candy Store
When it comes to sweets, our readers are discriminating! Godiva Chocolates on Market Street was the favorite place to pamper your sweet tooth, with Charleston Sweets (East Bay Street) only a few laps behind!

Best Grocery Store
By far, Harris Teeter is where our readers choose to push their carts.

Best Bakery
Baker’s Cafe and Saffron’s, both downtown, were the choices for those who prefer their pastries fresh.

Best Sporting Goods Store
Seems this was an initial response from most of you: R&M Sporting (Northwoods & Citadel Malls) was the favorite haunt of the athletic-minded, with T&T Sports (North Charleston & Summerville) winning second place. 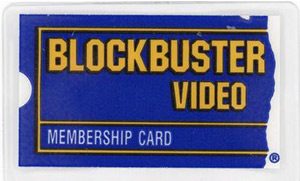 Best Video Rentals
Blockbuster Videos blasted the competition out of the race for the store you would most likely rewind for.

Best Hospital
What’s up, doc? Most people prefer to ask that question at Roper Hospital. downtown. For a second and third opinion, they try East Cooper and St. Francis hospitals.

Best Bank
The “telling” vote in a long line of banks is locally-owned First Federal of Charleston.

Best Bookstore
Who says you can’t judge a book by its cover? Chapter Two on East Bay Street is the best place to flip pages, followed by area Bookbags.
Best Record Store
For the record (or CD or tape), Harbour Records & Tapes (West Ashley and North Charleston) wins our local Grammy. The silver goes to Sensations in Mt. Pleasant.

Best Men’s Store
A family tradition seems to be your favorite tradition, too: Berlin’s suited most of our readers, followed by 319 for Men.

Best Shoe Store
Bob Ellis on King Street has the most “sole” as far as our readers were concerned, with Pete Banis’ shoes (Mt. Pleasant) following on its heels. 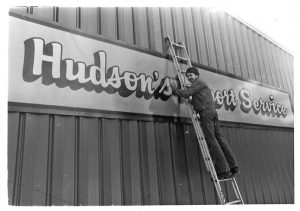 Hudson’s Imports in Mt. Pleasant was the first place winner in this bumper-to-bumper race.

Best Place to Buy Fresh Flowers
The budding genius for our readers was Buy the Bunch in Mt. Pleasant. Flowers by Murray and Nancy’s Flowers (both also in Mt. Pleasant) were other favorites for that special bouquet.

Best Hair Stylist
London Hair (downtown and Mt. Pleasant) shined in first place. We’d be splitting hairs if we tried to figure whether Nick’s or VIP came in second, both in Mt. Pleasant.

Best Shopping Area/Center
The downtown area – King Street, Charleston Place, and Market Street – is where most of you shop til they drop followed by Citadel Mall.

Best Kind of Exercise
“These shoes are made for walking,” and that’s just what you do! Aerobics, swimming and bicycling are your other favorite ways to tone up.

Best Live Entertainment
Myskyns is the hardest act to follow according to most of you.

Best Personalized License Plate
Although your responses received only one vote each (did you each vote for your own?), probably all of us would love to boast this one: ”PAID FOR”. Other favorites are “EIEIO” and “RUNVS” and “RCITYMH”.

Best Job in Charleston
Mayor Joe, move over! Many of our readers would like to be mayor-for-a­ day, while others want to be tour guides or real estate agents. And several of our readers believe their jobs are the best!

Best Thing in Charleston to Show Your Mom
Mom’s going to need a vacation after our readers finish dragging her around to the Market area, Waterfront Park and the gardens, in that order.

Best Jogging Route
The Battery and the beach are your favorite places to show off your Nike.

Best Golf Course
Don’t get tee’d off! Charleston National and Wild Dunes both tied for the best of course.

Best Place to Meet a New Person
Seems our readers split their Sundays pretty evenly between church and the beach in order to meet the most number of people.

Best Place to Take the Kids
Not only do you jog and meet new people on the beach, you also take your kids there! Beaches came in first, with area parks (Waterfront, Charles Towne Landing, and Palmetto Islands) another popular haunt for little ones.

Best Park
There were no losers in this category! Waterfront Park was the winner, but area residents love the outdoors, and Palmetto Islands and Charles Towne Landing were also favorites.

Best Place to Get a Speeding Ticket
Is there really a good place to get a ticket? Well, your responses were I-26, Highway 17, and the Ashley River Bridges were the places not to put the pedal to the medal.

Best Day Trip from Charleston
From one historic coastal city to another, all in a day’s play. Savannah was your top choice for a day trip. Other favorites were Hilton Head, Myrtle Beach, and Riverbank Zoo.

Best Old Thing in Charleston
The Battery seems to be the favorite of young and old here.

Best Annual Event
Spoleto was the leader in annual festivities, followed by a Taste of Charleston.

Best Place to Avoid
You guessed it, and you told us! The Cooper River Bridges are the best places to avoid for most of our readers. Howard, are you listening?

Best Thing Not Listed
Although we thought we had wracked our brains for categories you had some great suggestions! Here are a few, which we’ll include in next year’s “Best of”: fishing spot, hotel, place to live, doctor, beach, cinema, car, food item, TV station, and local magazine (we have our own favorite for that category!) Another best about the Lowcountry: fresh-picked fruits & vegetables, Biggest pain: tourists.

Best Hugo Story
Although you had many favorite stories, they all revolved around common themes: courage and helping our neighbors. Top honors for courage: the two men who kept Roper’s generator going during the hurricane and the last ones over the Ben Sawyer Bridge. Our neighbors aren’t only people; some of your favorite stories with a happy ending: the dolphin found in house on Folly that was returned to his home, the men who stayed with the animals at the SPCA, and the Sullivan’s Island dog found by his owner after Hugo. One reader boasted that we all stopped talking about the Civil War and started helping each other. Another favorite was the air rescue of the gentleman from the plough mud; he was rescued, but his pants remained. But, by far, the resounding best story of Hugo was “It’s over, and we survived!” That says it all.

On this episode of Mount Pleasant Podcast, Fred Tetor, Retired Mount Pleasant Fire Chief who has been involved in more than 40 Christmas Parades in Mount Pleasant since 1972 talks with host Brian … END_OF_DOCUMENT_TOKEN_TO_BE_REPLACED

Charleston, S.C.: For forty years, Charleston Friends of the Library (CFOL) has given community members the opportunity to become more involved with Charleston County Public Library (CCPL) by … END_OF_DOCUMENT_TOKEN_TO_BE_REPLACED