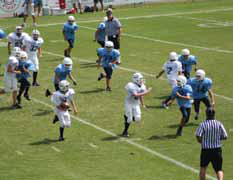 Football is a time-honored tradition throughout the United States. In towns and cities large and small, the roar of the crowd can be heard in every corner of the country and everywhere in between. It’s no different in Mount Pleasant, where the Recreation Department provides a place to play for nearly 65 teams and a way to participate for 170 volunteer coaches.

“We have a complete football program that begins with flag football that teaches the fundamentals of the game and tackle football which introduces pads,” said Jimmy Millar, Athletic Division chief and former football coach. “There are over 980 children who participate in our football programs, and we are very proud of that.”

Parents should plan to enroll their children early – signup starts in July – and should expect equipment, which generally lasts for two seasons, depending on the child’s growth, to cost around $200. 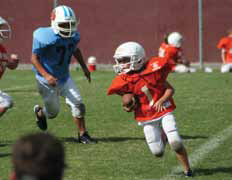 Before the start of the season, the Wando High School coaching staff holds a clinic for volunteer coaches. The games kick off with a jamboree at Wando Stadium; all team members and cheerleaders are introduced on the field, then the teams scrimmage for one quarter.

“I grew up in this program so I know our children have a great situation when it comes to facilities, the program and the people running the program,” said Millar, a former Mount Pleasant Recreation Department coach and player. “Overall, we have a great football program with a dedicated staff and committed coaches and players.”

To learn more about recreational football in Mount Pleasant,
visit www.TOMPSC.com or call (843) 884-2528.

Rebecca Imholz, Director of the Mount Pleasant Chamber of Commerce talks with host Brian Cleary about the 2nd Annual Dine Where You Live Campaign which is a proactive reaction by Mount Pleasant to … END_OF_DOCUMENT_TOKEN_TO_BE_REPLACED

For many of us, April 18 represents a looming and ominous deadline — Tax Day. Be it dread of the unknown, anxiety over how to navigate a complicated process, panic about penalties or stress about the … END_OF_DOCUMENT_TOKEN_TO_BE_REPLACED

Retiring from the fourth largest municipality in .the state of South Carolina after nearly 24 years of heading the Town of Mount Pleasant’s communications office is a momentous occasion for me. … END_OF_DOCUMENT_TOKEN_TO_BE_REPLACED