We suck ’em, shoot ’em, slurp ’em and savor every last second of their salty, sweet flavor before they slip down our throats.

Oysters, a popular seafood snack for centuries, unfortunately have flirted with near-extinction wrought by disease and overharvesting. In fact, according to the most recent study by the Nature Conservancy, shellfish have been struggling to survive worldwide, due in part to an 85-percent loss of oyster reefs. Nevertheless, the current Charleston-area oyster population is alive and thriving, according to Peter Kingsley- Smith, manager of shellfish for the Department of Natural Resources.

With nearby rivers and oceans chock-full of oysters, this means one thing for the people of Charleston: a terminal case of oyster fever.

Once strictly a fall and winter dish, the fruitful Charleston oyster population now serves as a succulent source of food 12 months out of the year. The only question is: Where do we go to assuage our oyster fever?

A favorite destination in East Cooper is The Boathouse, located on the Isle of Palms side of Breach Inlet. Formerly a bait shop, The Boathouse opened in 1997 and has been serving Lowcountry seafood and steaks ever since. The one-ofa- kind atmosphere gives customers the impression that they are dining in an “old wood boat,” as sous-chef Aaron Greenberg put it.

Greenberg, who has worked at The Boathouse for 10 years, was eager to talk about oysters.

Intrigued by the name “unami,” I asked Greenberg for an explanation. He described the Rhode Island shellfish as medium-sized, briny, with a clean finish – and expensive at $15 per half dozen.

Another local oyster bar, or full-scale seafood restaurant specializing in oysters, as partner and General Manager Bob Redding likes to call it, is Mount Pleasant’s own Abe’s Oyster House. The 4-year-old eatery has a sincere local feel about it.

“We serve oysters yearround, but our biggest oyster season are the winter months between September and April,” Redding explained.

Redding spoke about those winter months with exceptional enthusiasm, talking of a packed restaurant on Sunday afternoons, filled with locals slurping down $7 buckets of steamed oysters. He went on to praise the great work that DNR has done restoring the Charleston oyster population.

“Abe’s is just one small restaurant that sells oysters, and we run through 40 bushels a week. Without the DNR’s work to replenish our local oyster population, that price of $6 or $7 a bucket would certainly go up,” he said. 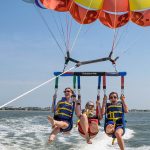 On this episode of Mount Pleasant Podcast, Kathy Landing, Candidate S.C. State House talks with host Brian Cleary about why she wants to serve in the S.C. House of Representatives District 80, the … END_OF_DOCUMENT_TOKEN_TO_BE_REPLACED

Hero Heating and Air Nominating Category: Best Heating and Air Company Justin K. Acree, Chief Operating Officer What is it like working with the Mount Pleasant community? Working in the … END_OF_DOCUMENT_TOKEN_TO_BE_REPLACED

Historic Georgetown, South Carolina is the cozy town you didn’t know you were looking to find. Located about an hour north of Charleston, the historic port city at the heart of the Winyah Bay sits … END_OF_DOCUMENT_TOKEN_TO_BE_REPLACED