Most children don’t figure out that they want to become doctors while stuck in a hospital bed, craning their necks to catch a fuzzy episode of The Smurfs on a television bolted to the ceiling. Oddly enough, however, Dr. Jon Jacobs discovered as a seven- 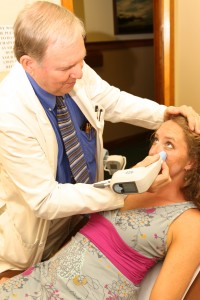 year-old outpatient that he’d found his calling in medicine.

“I was getting my tonsils out and realized I wanted to be a doctor,” he said.

Fast-forward to his high school education in Mount Pleasant, where Jacobs put down some teenaged roots after many years of being moved around by his father, who was in the Air Force and called the Lowcountry “the best place in the world they’d lived. Jacobs graduated from the old Moultrie High School on Coleman Boulevard, then completed his undergraduate in Premed at Davidson in NC. He returned for medical school at the Medical University of South Carolina, and decided he would become a surgeon.

“As a surgeon, I could take care of more patient issues without having to refer them for possible operations” he explained.

Jacobs completed five years of general and vascular residency and began learning techniques that revolutionized the world of medicine. Namely, he studied in Paris with a French doctor, Francois Dubois, who instructed Jacobs in how to perform laparoscopic surgery – a technique that Jacobs brought home to the southeast.

“I developed a laparoscopic approach to fixing a hiatal herniae [an esophagus/stomach hernia that causes acid reflux]. I returned to Paris and showed the technique to Dr. Dubois,” he said.

Because of his background, it was natural for Jacobs to take a “surgical approach” to dermatology. And, the art of dermatology appealed to Jacobs as well; he took several courses with Dr. Kathleen Riley at MUSC.

“Many dermatological problems happen to require surgery,” he mused. “I especially appreciate the cosmetic outcome of these procedures.”

As of late, Jacobs has “kept up” with the technological advances regarding dermatology without sacrificing his attention to his patients. His practice offers most of the lasers that you’d see in most dermatological offices now – plus a few surprises. One, known as radio frequency treatment, is gaining popularity and notoriety for blasting fat and wrinkles.

“Radio frequency, which is similar to the technology used in microwave ovens, sends a signal through the skin and painlessly melts the fat,” Jacobs explained. “As for wrinkles, the heat shrinks collagen and causes skin to tighten.”
But the office of Jon R. Jacobs Dermatology is more than just probing and zapping with laser equipment. Jacobs takes pride in listening to his patients’ stories.

“When I have a new patient, I ask them to tell me their story,” he said. “Perhaps their mother just died, perhaps they’ve gone through a divorce – but I check out their spiritual and mental health first. It shows that I care and establishes trust.”

Though his office is located in North Charleston and his residence in West Ashley, Jacobs spends ample time East of the Cooper, enjoying his secondary home on the Isle of Palms.

“I read a lot, write poetry and work on making wooden pens and other articles,” he said. “My artistic knack feeds into my profession; I can tell what would make my patients look best. Everyone wants to be the best version of themselves.”

On this episode of Mount Pleasant Podcast, Fred Tetor, Retired Mount Pleasant Fire Chief who has been involved in more than 40 Christmas Parades in Mount Pleasant since 1972 talks with host Brian … END_OF_DOCUMENT_TOKEN_TO_BE_REPLACED

Charleston, S.C.: For forty years, Charleston Friends of the Library (CFOL) has given community members the opportunity to become more involved with Charleston County Public Library (CCPL) by … END_OF_DOCUMENT_TOKEN_TO_BE_REPLACED