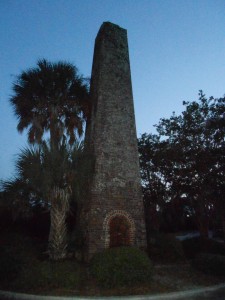 The Kiln Ghost at Brickyard Plantation

Near Wampancheone Creek and the ruins of a 19th century brick kiln chimney appears the startling image of a woman standing in the grass on the side of the road. The woman moves her hands close together in repetitive, spastic thrusts as if in a trance. She is dressed in ragged, dark clothes. Her face is uncleare, tilted down toward her jerking hands and masked by long, straw-like hair.

The woman has only been seen at dusk. The longer the sunset, the more pale light passes through her image, revealing that she is not of this world. All the sightings have occurred within 20 yards of one another. Because of her proximity to the kiln and the creek, she is believed to be the ghost of a slave from an 18th century industrial brickyard. The Wampancheone waterway, on the side of the original Boone Hall Plantation, is where creek mud was used to make bricks and tile for much of Charleston, including Boone Hall’s slave quarters.

Speculation as to the cause of her death could present darker, more tragic possiblities. An inventory of Horlbeck slaves from January 1854 is kept in the manuscript section of the Southern Historical Collections at the University of North Carolina at Chapel Hill, but the records only show the death dates and not the cause of death for a few of the slaves in the Horlbeck Brickyard. While the work is intense and demanded much of the slaves’ energy, it was not often dangerous except when the large kilns were lit up to cook the clay.

It was at sunset, the same time Boone Hall’s Brickyard phantom appears, that the slaves stopped work and shifted their chores. At this time the day’s clay molding was done, and in the shadowy light of disk the bricks and tiles were put into kilns. During this process, the appearance of firelight and sunlight could easily become blurred to an exhaustive slave like the one who may be replaying her tragic ending at the side of the road near the remains of the kiln. Perhaps she was inside a kiln, laboring over bricks, when she gave in to her exhaustion. At dusk, the kilns were fired to extreme temperatures and left to cook over the course of the night.

Reprinted with permission from Haunted Plantations by Geordie Buxton. Available from the publisher online at www.arcadiapublishing.com or by calling 888-313-2665.

The USS Yorktown was decommissioned in 1970 after three decades of service. She became the centerpiece of Patriots Point Naval and Maritime Museum in 1975. She has been the location of quite a bit of paranormal activity. There are two very active apparitions there. One is known as Shadow Ed and the other is Shadow Sam. These are nicknames given to the apparitions by Patriots Point personnel and security. Shadow Ed is the name given to the transparent, shadowy entities seen on the ship while Shadow Sam is a nickname given to a solid apparition seen on the Hangar Deck.
Shadow Ed is seen throughout the ship although he is predominantly seen in the Shipyard Museum. Ghost Hunters encountered him there in February 2012. TAPS team founders Jason Hawes and Grant Wilson saw an apparition on their equipment and as they investigated it disappeared. Patriots Point Security have had experiences in this location and in fact involved Mt. Pleasant Police during one of the events. Officers were dispatched and upon investigation discovered a “…large mass twice my size…” according to one of the officers. As they investigated it disappeared. Most recently a group of tourists on the Yorktown Ghost Tours encountered Shadow Ed this past month. The members of this group were from four different states (SC, NC, Georgia, and Ohio) and all observed a shadowy figure moving about the area and interacting with them. It originally appeared to be standing in a corner as if observing and then would disappear and re-manifest itself in another area peering around corners.
Shadow Sam has been seen for decades. He is a solid apparition dressed in a black Navy uniform and has been observed on the Hangar Deck. He has been witnessed by many including retired law enforcement officers, Patriots Point Fire Safety and also Security, and also guests. He was observed by guests in December 2012 s they were exiting the ship and observed a man in a black coat carrying a duffle bag entering the ship. Three nights later Security encountered him three times in one night and a month later a mother, three teenage girls, and a tour guide encountered him. They originally thought it was a security officer until he failed to respond to their shouts. Fearing it was a trespasser, the guide (a retired law enforcement officer) ran in the direction of the person only to have him disappear in front of the astonished group.
He was recently observed by a guide and three guests on a tour this past month. He was seen standing on the Hangar Deck at the Fantail of the ship near the Snack-bar area. He was watching the group and as they approached he disappeared.

The plantation located in McClellanville is said to be haunted by the ghost of John Henry Rutledge. He was heir to a very prominent family and expected to marry well yet he fell in love with the daughter of a Georgetown pharmacist. His mother forbade him to marry her and when he approached the young lady’s father he too forbid the marriage. He felt as if his daughter would be chastised and looked down upon by the Rutledge family. He also told him never to set foot in his pharmacy again. John Henry Rutledge returned to the plantation dejected and depressed. Day after day he sat in his rocker in his room staring out the window. As he became more and more depressed his family began to mock him. On March 30, 1830 they threw a party in the downstairs ballroom. A storm set in and this only added to his misery. That night he shot himself in the head. He did not die immediately. He would suffer an additional two more days before dying. He is buried on the property and is said to haunt the house there. The rocking chair is often found near the window rocking on its own. The property is also reported to be the sight where Edgar Allan Poe wrote “The Gold Bug”and used Sullivan’s Island as the site of the tale. He was stationed at Ft. Moultrie as Edgar A. Perry according to records and would have been quite familiar with the Island. 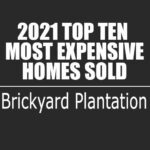 Owner JD Cooper Talks Shop, Shutters and Staying Power What led to your success? I am a native Charlestonian and have always loved the water. At age 15 I became a commercial fisherman. As our town … END_OF_DOCUMENT_TOKEN_TO_BE_REPLACED

When Pitt Street Pharmacy took root in the 1940s in what is now Old Village in Mount Pleasant, it was one of many such pharmacies across the U.S. Now, it’s not only a rare original find; its … END_OF_DOCUMENT_TOKEN_TO_BE_REPLACED

Every little girl dreams of her wedding day — the elegant wedding cake with dozens of layers, the perfect venue decorated with gorgeous flowers and, most importantly, the show-stopping wedding dress … END_OF_DOCUMENT_TOKEN_TO_BE_REPLACED