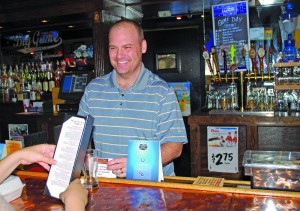 When he lived in Denver and worked in the corporate world, Addie Culler’s basement was a shrine to football, basketball, baseball and ice hockey, complete with memorabilia, a built-in bar and, of course, an area dedicated to the American sport of watching American sports on television.

He’s moved from Colorado to South Carolina, but Culler’s life isn’t all that different these days. As the owner of Big Game Bar & Grill in Mount Pleasant, he has 16 televisions instead of one. Much of the memorabilia is the same, though; he simply moved it from the Rocky Mountains to his restaurant and sports bar in the Carolina Lowcountry.

“It feels homey in here. It’s like coming into someone’s home to watch a football game,” said Culler, who purchased what once was Foster’s in July. “It’s a family-friendly place. It’s always fun here. There’s probably going to be some discussions among people pulling for opposing teams, but they’re respectful of each other. They’re just sports fans.”

Culler said Big Game Bar & Grill is generally busiest on Saturdays, when South Carolina and Clemson fans pile in for food, fun and beverages. He added that Gamecocks and Tigers aren’t his only customers. His regulars include a smattering of other college fans, along with a group of 50 to 75 loyal Nebraska supporters.

His customers can see just about any college game they choose. For instance, the recent South Carolina/Coastal Carolina game was available in the Charleston area only on Pay-Per-View, so he purchased the package to make sure his Gamecock and Chanticleer fans would be able to watch the game. On Sundays, all the NFL games are available.

People don’t come to Big Game Bar & Grill just for the opportunity to watch sports on TV. There are also kid-friendly video games and a pool table, a varied menu and an extensive choice of beer and other adult beverages.

And, of course, the big game wouldn’t be a big game without burgers, fries, wings and hot dogs. However, if you’re just dropping by for lunch or dinner, an array of sandwiches and wraps, from Reubens to Philly cheesesteaks to fish tacos, as well as salads, also are popular choices.

“It’s not gourmet food, but it’s really good bar food,” Culler said. “We have a diverse menu and great service, and it’s a great place to watch a game. It’s a comfortable place to come and eat.”

On this episode of Mount Pleasant Podcast, Fred Tetor, Retired Mount Pleasant Fire Chief who has been involved in more than 40 Christmas Parades in Mount Pleasant since 1972 talks with host Brian … END_OF_DOCUMENT_TOKEN_TO_BE_REPLACED

Charleston, S.C.: For forty years, Charleston Friends of the Library (CFOL) has given community members the opportunity to become more involved with Charleston County Public Library (CCPL) by … END_OF_DOCUMENT_TOKEN_TO_BE_REPLACED