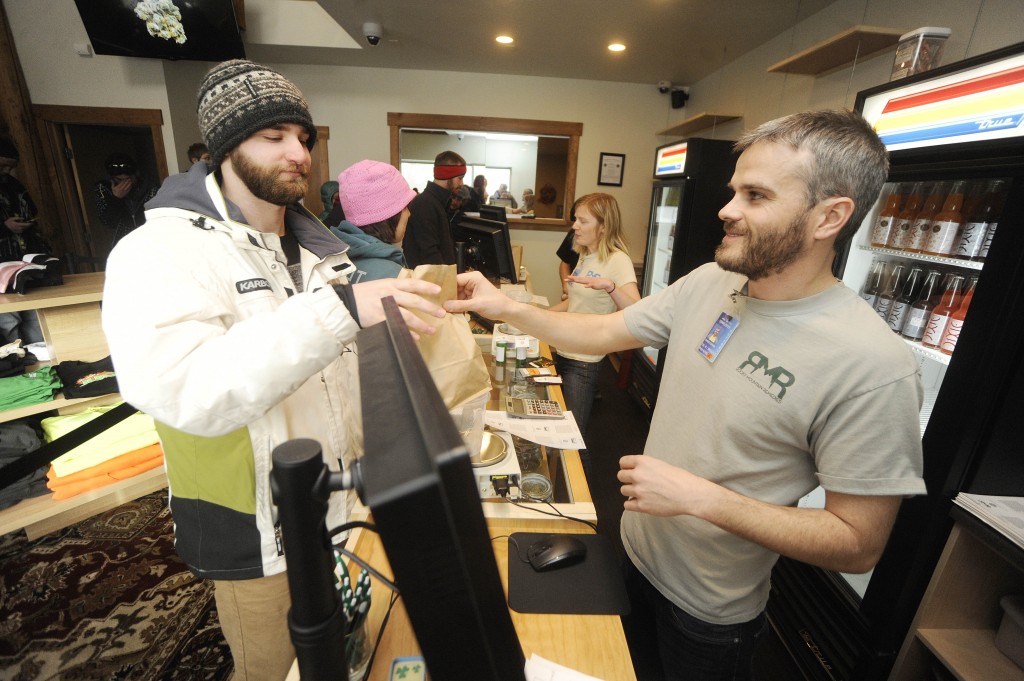 Editor’s note: Recreational marijuana has about as much chance of being sold legally in South Carolina as, for instance, a person has of jumping from the moon and landing on Earth – more on that later. In Colorado, however, you can now pick up some weed at the local pot store. One of our crack reporters just happened to be high in the Rocky Mountains the day Mary Jane came out of the closet and into the mainstream.

It was the first time that I had ever waited in a line and seen everyone around me smiling from ear to ear. The anxiousness and annoyance normally displayed under these circumstances was replaced with excitement, anticipation and a few musicians banging on drums, strumming guitars and singing Ben Harper’s “Burn One Down.”

Surprisingly enough, my enthusiasm on the morning I visited Rocky Mountain Remedies – I found the only place you can buy recreational marijuana in Steamboat with my IPhone app, “Weed Maps” – was entirely outmatched by godfather, a baby boomer and former pot smoker. We arrived at the pot shop to find a line of 30 to 40 people from all corners of the Midwest. A guy from Wyoming who was featured in the local paper’s cover story literally started crying when he purchased his first bag of legal marijuana. My 70-year-old godfather displayed his zeal when two local newspaper dopes video interviewed him. He finished his pro-legalization diatribe with “It’s about damn time.”

I wasn’t even stoned, but laughing at the hilarity of the situation made my side hurt. We waited in line for an hour and never once cursed the Colorado cold. The line, which eventually grew to nearly 100, consisted of people from all walks of life. Local construction workers and vacationing baby boomers eagerly shared their “one time when I was high” stories.

“The Indica will make you feel laid back and lethargic, while the Sativa will make you laugh and debate for hours whether it’s possible to jump from the moon and land on Earth,” one of them explained.

My godfather, on the other hand, wanted to utilize the state-allotted quarter-once- per-day limit as creatively as he could. He was literally a kid in a candy store.

The day commenced with the sharing of a joint between family members from different generations and different walks of life. As we sat in the hot tub and gazed out at the late afternoon snow falling on the Rocky Mountains, I smiled and wondered if there’s a marriage on the horizon for marijuana and America.

Click, Listen, Watch & Learn. Doug Holmes, "The Stats Guy" crunches and studies statistics in many fashions including the MLS in Charleston talks with host and publisher Bill Macchio about the 2022 … END_OF_DOCUMENT_TOKEN_TO_BE_REPLACED

John Powell, CEO and President of the Southeastern Wildlife Exposition (SEWE) talks with host Brian Cleary about the expo's art show featuring local and regional artists, and Powell talks about other … END_OF_DOCUMENT_TOKEN_TO_BE_REPLACED

I’m sure you’ve heard the saying, “a picture is worth a thousand words” or “it takes a village.” Both of these popular expressions apply to the journey I recently embarked on, which culminated on … END_OF_DOCUMENT_TOKEN_TO_BE_REPLACED