We asked Cheryll Woods-Flowers, who was mayor of Mount Pleasant from 1992 until 2000, to interview our new mayor shortly after she took office. Linda Page, who was elected in November 2013, is the owner of Page’s Thieves Market on Ben Sawyer Boulevard. She is enthusiastic about her new venture with the town of Mount Pleasant. Read on for a conversation between these two ladies. – Mount Pleasant Magazine Editors

CWF: You’ve officially been Mount Pleasant’s mayor for a while now. How is it going?

LP: It is going very well. It is very exciting, with three ribbon cuttings, so lots of new businesses are coming to town. It has been a little slower than normal this week at Town Hall since it is Thanksgiving week, but I have had lots of meetings for boards that I serve on as mayor and interviews so it has been a nice honeymoon period. I am thinking about how I am going to manage my life with all of these meetings.

CWF: When did you know that you wanted to be mayor?

LP: I guess that I thought that I always was the mayor. Growing up in Mount Pleasant and loving this town so much, 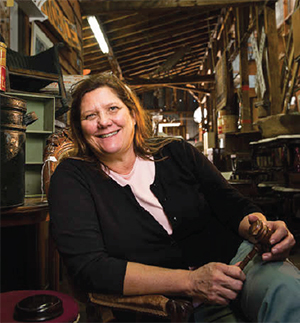 CWF: What initiatives would you like to work on?

LP: Engagement with citizens during the decision-making process. When citizens are happy, they don’t seem to get involved. I want them involved from the beginning instead of when something happens. It will help us make better decisions.

CWF: How will you communicate with your staff? What will be your leadership style?

LP: I am not a micromanager. I think we should hire good staff and give them the support that they need. With regard to leadership style, I think that women have many advantages. We are understanding; we are used to multi-tasking; we are encouraging. I won’t always agree but will support staff and council when I can, looking at all sides and coming to a consensus.

LP: Committee appointments are important. I love the fact that the work is done in the committees. Some may argue that the committee system is not open and that meetings are at an inconvenient time, but I believe that if an issue is important to you, you will make time to be there. I love our form of government. I made appointments very deliberately because I wanted to use the talent that I have. I wanted to make sure we were going to be positive, and I wanted to use what I call constructive conflict. I think that it will work out very well. The committees are a team, so you have to turn it over to committees and let the committee chairs lead. I will fight for what I believe is best for my town. Sometimes council will agree with me and sometimes they won’t.

CWF: Do you believe this is the best form of government for the town or do you think that something else should be considered?

LP: I absolutely believe that it is and would like to put it to bed rather than bringing it up every four years.

CWF: What are the top challenges for the town? Do you think the town is equipped to meet them?

LP: Protecting the quality of life is number one. Continuous improvement of infrastructure and transportation is important. We are dependent on other agencies and outside resources. It is becoming a bigger problem and we have to find the money through cutting something or by finding other resources. Schools are also an important part of the quality of life. Again, it is mostly outside of our control. Overcrowding of schools; lines of traffic; kids in trailers. We need a new high school sooner than later. Another school with a different name or one school with two campuses potentially. We aren’t the only community with problems. We will continue to talk with the school district about our needs. I see great things in our future with schools.

Number two would be annexation. We want to be more inclusive along with being more aggressive. Cultural communities want a voice because changes are happening around them and to them. I want to reach out to their leaders.

CWF: Development; infrastructure spending; recreation. How will you balance these needs with finances and with the demands of the public? If you had to cut the budget, which items would you cut first?

LP: We first need to look at efficiency. We need to protect and encourage economic development to bring in higher paying jobs. Businesses will come to a community with a high quality of life, where the children of their employees are going to good schools. When looking at the top two funding priorities, first it would be public safety, then public services.

CWF: Who have been the three most influential people in your life?

LP: First, Jeanette Mullins Harper, my speech teacher in high school. She encouraged me to speak because she believed that I had something to say.

Second, Dr. Jim and Ann Edwards, because of their relationship with my parents. My father served as a merchant seaman with Dr. Edwards and the high point in my mother’s life may have been going to the Inaugural Ball when Dr. Edwards was elected governor. I got interested in politics at a young age due to Dr. Edwards.

Third would be my two brothers for lots of reasons – some that I can’t talk about. I am the only girl in the family, and I got my competitive spirit from them, knowing that if they could to it, so could I!

For many of us, April 18 represents a looming and ominous deadline — Tax Day. Be it dread of the unknown, anxiety over how to navigate a complicated process, panic about penalties or stress about the … END_OF_DOCUMENT_TOKEN_TO_BE_REPLACED

Retiring from the fourth largest municipality in .the state of South Carolina after nearly 24 years of heading the Town of Mount Pleasant’s communications office is a momentous occasion for me. … END_OF_DOCUMENT_TOKEN_TO_BE_REPLACED

Perhaps you’ve noticed it as you’ve turned off Highway 17 onto Mathis Ferry Road, just past the first traffic circle. More likely than not, you haven’t paid it much attention. But that’s about to … END_OF_DOCUMENT_TOKEN_TO_BE_REPLACED