Life as a magazine writer and editor sometimes means imagining things in their prime that are still a little ways off. Take, for example, the day I visited the community garden at I’On on a January afternoon. It wasn’t difficult to envision the mounds of dirt erupting for fresh vegetables and colorful flowers to burst forth, but for that particular day I had to use my mind’s eye as I talked to the garden coordinator, Steve Degnen.

Degnen moved to the Lowcountry from New York seven years ago and claims that at the time he knew “nothing about gardening.” But he liked the I’On community and envisioned an opportunity for everyone who lived there, from families to singles and retirees.

“There are lots of neighbor activities, but I wanted to start something sponsored by I’On as a whole,” he explained.

A garden seemed like the right answer. Steve’s first move was to seek the support of  the I’On Homeowners Association, which he readily received, and a budget to get started. Now the garden has pretty much taken on a life of its own, to the tune of families clamoring every January to plant what eventually will be that year’s bounty. Each family receives a plot inside the garden – which is made up of 30 plots – and a starter kit.

What’s inside the kit? According to Degnen, it’s everything from the family’s individual plot location to photos of plants that might work well to harvest information and dates. Families are able to grow whatever they want, be it flowers or vegetables. The only rule is that you must take care of your plot.

“Plots must be weeded and harvested on time,” Degnen commented. “And these little gardens produce so much food! We use the proper soil and irrigation so it yields plenty, so people can give vegetables to neighbors.”

But besides enough summer tomatoes to dress any salad or sandwich that comes along, the garden has done just what Degnen was hoping to accomplish in the I’On community.

“Small children walk through it a lot; I can’t believe how many people visit it,” he mused. “My point was to create something that gets people together.”

Meanwhile, on Sullivan’s Island, next to the Edgar Allan Poe branch of the Charleston County Library, another community garden has been in existence for the last two years. Resident and garden lover Carlsen Huey, along with a few earthy friends, got the project off the ground, literally.

“A couple of us who were kicking around the idea of a garden emailed Carl Smith, our former mayor, and attended a council meeting to garnish support,” said Carlsen the day we walked around the garden.

“Smith suggested this location, by the library. And the city graciously offered to supply us with free water,” he pointed out.

Once plans were in full effect, the Sullivan’s garden came together quickly. The team decided on raised beds, since the soil is rocky and sandy. Councilman Pat O’Neill donated the lumber for the beds, and the wood was 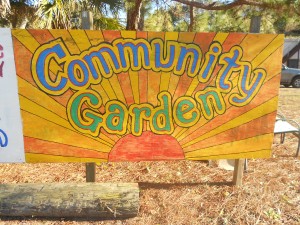 fashioned into 11 foot x 4 foot boxes, spaced apart so that “mowers can fit in between and you can pick vegetables along the bed,” Carlsen said.

The Sullivan’s garden, though it was pretty sparse the day of the interview, goes through three different planting seasons: spring, summer and fall, depending on the vegetables. The growing cycle was determined by a calendar published by the agricultural center at Clemson University. The calendar provides much of the same information included in the I’On garden kit, such as suggested plants and harvest times.
;

Carlsen remarked that most seeds are purchased locally at Royall Ace Hardware in Mount Pleasant and that “most of the planting is done from seeds.” Speaking (sort of) of seeds, Carlsen and other avid gardeners enjoy teaching children to work in the garden and learn the way that fruits and flowers spring from the fertile ground.

“I love seeing kids in the garden,” he confessed. “Once it gets going, we pair up with the library and the kids do a tour. They plant things like sunflowers and watch how they grow.”

At the Hidden Ponds community garden, located not far from Hidden Ponds Nursery in Awendaw, owner Phil Pierre is hosting families for the second year. Though Pierre is busy running the plant nursery and said he “doesn’t have time to supervise” gardeners, the 1.5 acres of land are ripe for plenty of planting.

“This year will be more organized than the first year was,” he declared. “And if possible, we’d like to expand after this year.”

Newest of all to this cluster of gardens is Daniel Island’s proposed community garden, which a group of about 60 residents is working to make happen. Jacqueline Gowe, a reader of the Daniel Island News, won the newspaper’s competition in the spring of 2012 on ways to enhance the Daniel Island community. She suggested a garden, and several other people heartily agreed with her.

Two years later, the committee has designed a garden with 20 raised beds. Meanwhile, a tract of land located behind Bishop England High School and owned by the Catholic Diocese of Charleston could become the garden’s new home. The plan is to incorporate help from the students at Bishop England, in addition to inviting everyone on Daniel Island to take part.

“We believe that through working together we will be able to build, tend and harvest a thriving vegetable, herb and flower garden, to benefit and delight young and old on Daniel Island,” said Gowe.

People are drawn to the Lowcountry in large part because of the beaches, the salt marshes, the moss-draped oaks, the cypress swamps — the stunning natural landscapes that inspire awe and support an … END_OF_DOCUMENT_TOKEN_TO_BE_REPLACED

Click, Listen, Watch & Learn. Doug Holmes, "The Stats Guy" crunches and studies statistics in many fashions including the MLS in Charleston talks with host and publisher Bill Macchio about the … END_OF_DOCUMENT_TOKEN_TO_BE_REPLACED

John Powell, CEO and President of the Southeastern Wildlife Exposition (SEWE) talks with host Brian Cleary about the expo's art show featuring local and regional artists, and Powell talks about other … END_OF_DOCUMENT_TOKEN_TO_BE_REPLACED