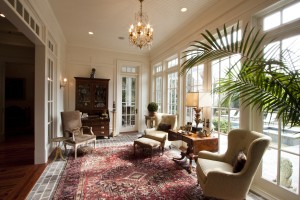 When I visited Andrea Winckler at her home on Daniel Island, it was hard to decide where we should pull up a chair and chat about her recent experiences with Tidal Creek Construction. Andrea and her husband, Tom, relocated from the Washington D.C. Area a few years back and were thrilled with the beautiful exterior of their home from the moment they found it. Nevertheless, Andrea knew she had another vision for the floor plan. Now that her vision is realized, the possibilities for places to have a face to face conversation inside the Winckler home are endless.

The initial project between the Wincklers and Tidal Creek Construction was the sun room – formerly an open porch – and it was right in the nick of time, since Andrea had become frustrated in her hunt for local contractors. She met with three different companies before someone suggested Mike Riedmayer and Jay Hadwin. So Andrea and Tom headed over to a friend’s house to view another sun room that the Tidal Creek team was working on. Andrea said she “knew instantly” when she saw that sun room in progress that they were up for the job.

“I wanted to keep up a certain standard for our house,” she explained. “I knew that they would do the work as I wanted.”

Andrea herself has been in the interior design business for over twenty years, primarily engaging in large projects around the D.C. Metro. Naturally, she has a nose for good handiwork and shared a few reasons why Mike and Jay were most eligible to complete her elaborate plans for the house. She explained how most contractors have one, or two at most, of the three qualities she deems important: being easy to collaborate with, providing excellent results and possessing artistic abilities. According to Andrea, Mike and Jay have all three.

What does it mean to possess artistic abilities? Well, for example, when Andrea came up with her dream floor plan, she was aware that having an architect draw the plans that fluttered around her imagination might be a costly detour – and that most contractors don’t draw their own plans.

“The fact that Mike could do his own architectural drawings was helpful,” she said. “He also had his own ideas. What these guys can do and what I think up make a great combination.”

The formal living room is another favorite of Andrea’s; she confessed to me that she “is one of the only people she knows who likes a formal living room.” The artsy, elegant space was originally the downstairs master bedroom, however, Andrea prefers more living space on the first floor of the house. Thus, the master bedroom is now located upstairs where the family room used to be.

“You don’t want to bring guests upstairs,” she commented.

Meanwhile, on the second floor of the Winckler abode, practically no room is what it once was. Tom’s office, which was a smaller bedroom, is now a spacious workspace filled with light. The master bathroom was also a small bedroom, and the master closet – which I salivated over for a few moments – was the original office.

With all the “musical rooms” taking place in the house, one would think that Andrea and Tom felt stressed and hassled throughout the process. Not so, according to Andrea. She emphasized what “a pleasure to have around” her contractors are. And the subcontractors who work for them are also top-notch, another sign of quality in Andrea’s eyes.

Of course, the real mark of a job done well is how happy the homeowner is – and I could see that Andrea was thrilled to show me around the new floor plan. Each room is designed with her personal touches and the “flow” of the house gives it a cozy, open feel, much like the Wincklers themselves.

On this episode of Mount Pleasant Podcast, Fred Tetor, Retired Mount Pleasant Fire Chief who has been involved in more than 40 Christmas Parades in Mount Pleasant since 1972 talks with host Brian … END_OF_DOCUMENT_TOKEN_TO_BE_REPLACED

Charleston, S.C.: For forty years, Charleston Friends of the Library (CFOL) has given community members the opportunity to become more involved with Charleston County Public Library (CCPL) by … END_OF_DOCUMENT_TOKEN_TO_BE_REPLACED