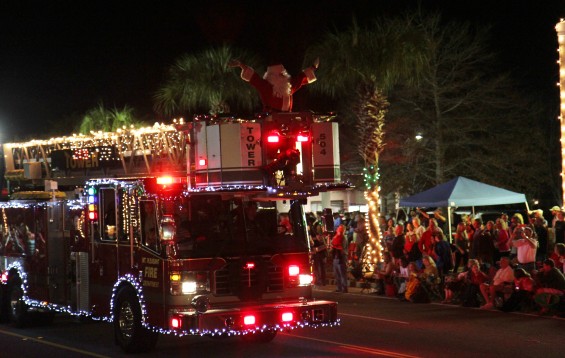 Even school kids who can’t seem to memorize their times tables can name all those mythical reindeer who pulled Santa’s sleigh in the iconic poem, “Twas the Night Before Christmas.” There are Dasher, Dancer, Prancer, Vixen, Comet, Cupid, Donder, Blitzen and for just about anyone born after the 1950s, Rudolph, too. Bob, or Tom or Jake or Willie? Never heard of ’em.

Of course, that’s a bit different here in Mount Pleasant. As of this writing, the exact identity of who will take the reins of the jolly old elf’s “sleigh” from those eight tiny reindeer is not known, but kids enjoying the 2014 Christmas parade Dec. 14th can be sure he’ll be one of the firefighters from the first shift at Station #1 on McCants Drive.

This year, whoever draws the plum assignment of carrying Kris Kringle along the parade route in the bucket or platform of a gleaming red aerial ladder truck will be continuing a tradition that began with the first celebration back in 1996.

According to Mount Pleasant Fire Chief Herbert Williams, his entire department looks forward to its key role in the gala caravan of yuletide floats along Coleman Boulevard from Pelzer Drive to the Sea Island Shopping Center.

There’s Santa’s driver, of course, who pilots the huge truck as Santa waves to his youthful – and not so youthful – admirers from his lofty perch in the much-awaited finale to the two-hour-long, 100-float procession.

According to the fire chief, all of the town’s vital service divisions, including police and sanitation, are deeply involved in making the annual celebration the smash success it has become. The parade was recently named one of the top 20 attractions in the region by Southeast Tourism Society. But the lead role definitely falls to the stalwart smoke-eaters.

On parade night, the Mount Pleasant Fire Department is responsible for a host of tasks, from providing the uniformed honor guard and hiring and supervising the pyrotechnic team that sets off the fireworks display signaling the start of the parade to setting the order of the flotilla of colorful mobile displays and inspecting each one for safety. No loose electrical connections or open flames, please!

Firefighters also help block roads; roam the fireworks area in a “brush truck,” seeking errant skyrocket embers; provide emergency medical services with paramedics on bicycles to speed them to wherever they are needed; and, of course, stringing the myriad lights that festoon their own massive “Santamobile.”

Topping this effort off, the department also supplies its very own Santa stand-in to represent Father Christmas in his journey along the parade route. The Fire Department owns not one but two complete Santa outfits, and, in addition to the parade, uses them to make numerous pre-Christmas appearances at venues throughout town.

In fact, said Nicole Harvey, special events planner for the Mount Pleasant Department of Cultural Affairs and Tourism, the spectacular parade is actually the culmination of a festive Christmas weekend of activities that include a free screening of a seasonal motion picture – “Elf!” has been a popular choice – and a holiday market and craft show at the Farmers Market Pavilion. The Fire Department will also be on hand at all these events, bringing Santa and also standing by to handle any dangerous contingencies.

There’ll be plenty of excitement and surprises as this year’s renewal of the town tradition continues and businesses, social groups and more view for the applause and accolades of the estimated 25,000 spectators expected to be on hand. Congressmen, senators, a two-star general, the Wells Fargo stagecoach, the famous Budweiser Clydesdales, the Wando High School marching band and the Charleston Police Department Fife and Drum Corps are among the “stars” of past parades. One thing is certain: People will begin arriving along Coleman Boulevard as early as 7 a.m. on parade day to stake out prime viewing spots.

According to Training Division Chief Shaun Simpson, the culmination of all the Fire Department’s extra work on the Christmas Parade is when Santa rolls by.
“The joy comes in the end when you see a fire truck with all its lighted decorations and an enthusiastic, smiling Santa waving to all the kids,” he said.

With the Mount Pleasant Fire Department handling logistics, this year’s parade is set to go off without a hitch, even minus those traditional eight tiny reindeer. Sadly, even Rudolph, too, will be sidelined again when this year’s gala kicks off. After all, that brightly lighted red nose of his just might be … a fire hazard!

Story by Bill Farley.
Photo courtesy of the Town of Mount Pleasant.

Rebecca Imholz, Director of the Mount Pleasant Chamber of Commerce talks with host Brian Cleary about the 2nd Annual Dine Where You Live Campaign which is a proactive reaction by Mount Pleasant to … END_OF_DOCUMENT_TOKEN_TO_BE_REPLACED

For many of us, April 18 represents a looming and ominous deadline — Tax Day. Be it dread of the unknown, anxiety over how to navigate a complicated process, panic about penalties or stress about the … END_OF_DOCUMENT_TOKEN_TO_BE_REPLACED

Retiring from the fourth largest municipality in .the state of South Carolina after nearly 24 years of heading the Town of Mount Pleasant’s communications office is a momentous occasion for me. … END_OF_DOCUMENT_TOKEN_TO_BE_REPLACED