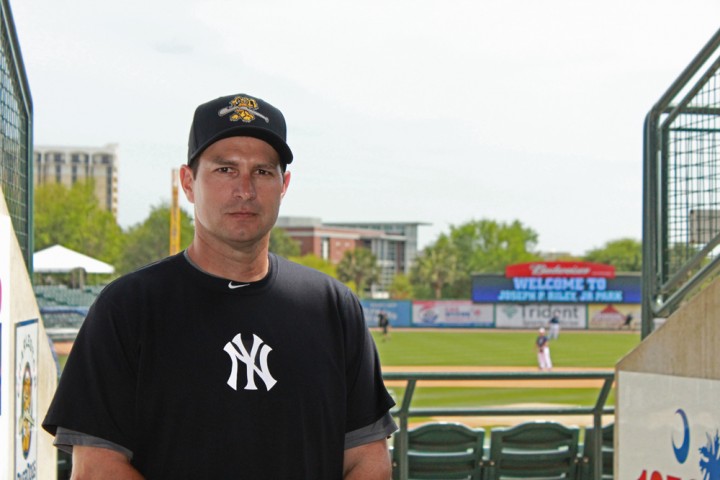 On a sunny afternoon in April, the Charleston RiverDogs, the Low A affiliate of the mighty New York Yankees, warmed up for a night game with the Lexington Legends in the batting cages located deep in the bowels of Joe Riley Park. Under normal circumstances, the RiverDogs would have taken batting practice on the field, under a brilliant South Carolina sun, but they were forced inside by a college game between The Citadel and Wofford.

That never happens in the major leagues, of course, but it mattered little to Greg Colbrunn. After a 13-year playing career with seven different teams and, most recently, a two-year stint as hitting coach with the Boston Red Sox, Colbrunn is glad to be able to spend more time with his family in his adopted hometown of Mount Pleasant.

The proud owner of three World Series championship rings and now the RiverDogs’ hitting coach, Colbrunn served in the same capacity from 2007 to 2009 and in 2011 and 2012, and managed the team in 2010. After two years with the Red Sox organization – and a medical emergency that kept him in a Cleveland hospital for the better part of two weeks – he was ready to return to a routine that gives him a lot more time with his wife, Erika, and three children: Danielle, 16, Kelsey, 13, and Vanessa, 9.

“I have three daughters, and I was away eight to nine months at a time, from February to November,” he explained.

Colbrunn, a California native, moved his family to Dunes West in Mount Pleasant in 1999, long before his playing days were over. During his drive to spring training in Florida, he would stop to see an aunt and uncle who lived on the Isle of Palms. He met Erika while he was a Florida Marlin, and, when it came time for them to put down roots, they considered several potential locations before settling on the Carolina Lowcountry.

“When you are a player, you can live where you want to live because you’re gone most of the year anyway,” he said. “We looked at South Florida, Arizona and Atlanta before deciding on Mount Pleasant.”

Originally signed by the Montreal Expos – now the Washington Nationals – Colbrunn played in the Midwest League, the Florida State League, the Southern League and the International League on his way to The Show, arriving in the big leagues at the age of 22 in July 1992. Before his playing days were over, he would don the uniform of the Expos, Marlins, Twins, Braves (twice), Rockies, Diamondbacks (twice) and Mariners.

A solid right-handed hitting first baseman with decent pop – he finished with a better-than-respectable career average of .289 to go along with 98 home runs – his greatest memories of his playing days revolve around the 2001 season. Not long after the nation was rocked by the worst terror attack on American soil, Colbrunn and his Diamondback teammates knocked off the Yankees in the World Series, claiming the title with a dramatic game-seven win.

“Winning the World Series, going to New York the year of 9/11, playing against the Yankees,” Colbrunn mused, reminiscing about the Series that ended on a walk-off bloop single by Luis Gonzalez.

In addition to manning first base, Colbrunn saw action as a designated hitter and played a few games at third base and in right field. He even put on the catching gear and squatted behind the plate for one inning while he was with the Rockies in 1998. He thinks his lengthy major league career was extended by his ability to come off the bench in tight situations

“I could hit lefties and I was an excellent pinch hitter,” he commented. “That kept me around for most of my 13 years. I was always prepared and always worked hard.”

Colbrunn takes the same approach with RiverDogs hitters as he did with his own baseball career, even though many of them will never see the inside of a major league clubhouse.

“We teach these kids to get the most out of their ability and see how far it takes them,” he said. “You try to develop as many of them as you can. They have all had success on some level.”

Though the title was the same, Colbrunn’s job with the Red Sox is a whole different ballgame than his current position with the RiverDogs. He pointed out that in the majors, coaching players such as David Ortiz and Shane Victorino basically consists of providing them with scouting reports.

“I wasn’t teaching the basics of hitting. They already know how to hit. With these kids, it’s helping them develop game plans and fine-tuning their swings.” he said. “It’s the fundamentals, teaching a basic foundation.”

Is winning important at the Single A level? Sort of, according to Colbrunn.

“We try to develop a winning atmosphere. The most important thing is that we are trying to develop future New York Yankees. What we really want is for every one of these guys to play for the Yankees.”

He added that in the South Atlantic League, where the average age of the players is around 21, the higher draft picks are usually the players who make it to the big leagues.

“Some players develop over time,” Colbrunn said. “You never know.”

You never know. The same could be said about Colbrunn’s experience as Boston’s hitting coach. In 2013, under his tutelage, the Red Sox scored more runs than any team in baseball. The following June, he spent nearly two weeks in the hospital after suffering what turned out to be a subarachnoid hemorrhage. He has recovered completely, but, at the time, it seemed like a scary situation.

“We were in Cleveland, and I was getting ready to board the bus to the ballpark,” Colbrunn said. “My neck locked up, and I had a bad headache. It was like I’d been kicked in the back of the head.”

The pain worsened. Colbrunn remembered making it to the stadium, then waking up in the Cleveland Clinic two-and-a-half days later.

A subarachnoid hemorrhage is bleeding into the space between the surface of the brain and the surrounding membrane.

“The Red Sox were great. They flew my wife and mom and dad to Cleveland,” Colbrunn said.

He eventually returned to the Red Sox, who slipped from first to 18th of the 30 major league teams in the runs-scored column. When the season came to an end, he informed the Sox that he wasn’t interested in coming back for another year. He said the hemorrhage had nothing to do with his decision to return to coaching in the Yankees’ minor league system.

Colbrunn said he currently has no plans to coach on the Major League level again. He said he might return to The Show when his daughters are older, but regardless of where his baseball life takes him, “He will always call Mount Pleasant home.”

Click, Listen, Watch & Learn. Doug Holmes, "The Stats Guy" crunches and studies statistics in many fashions including the MLS in Charleston talks with host and publisher Bill Macchio about the 2022 … END_OF_DOCUMENT_TOKEN_TO_BE_REPLACED

John Powell, CEO and President of the Southeastern Wildlife Exposition (SEWE) talks with host Brian Cleary about the expo's art show featuring local and regional artists, and Powell talks about other … END_OF_DOCUMENT_TOKEN_TO_BE_REPLACED

I’m sure you’ve heard the saying, “a picture is worth a thousand words” or “it takes a village.” Both of these popular expressions apply to the journey I recently embarked on, which culminated on … END_OF_DOCUMENT_TOKEN_TO_BE_REPLACED