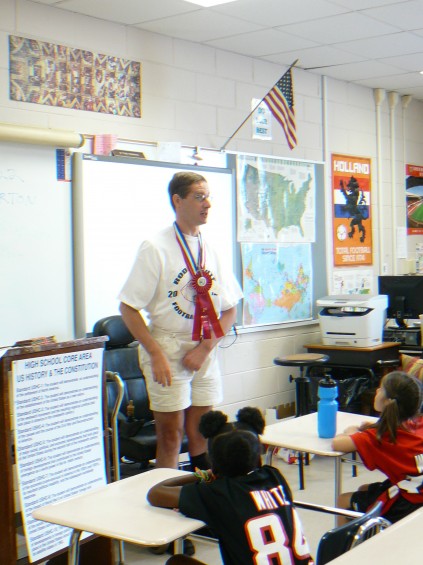 The odds are that most people couldn’t tell you the leading cause of death among children 1 and older. It’s not disease or disaster or parental neglect. And even though traumatic injury to the brain or spinal cord doesn’t always kill outright, it often leaves its victims with serious complications that can last a lifetime.

That’s why the international ThinkFirst Program, which traces its roots back to the mid-1980s, came into existence. It’s also why as director of its South Carolina Lowcountry chapter (www.SCThinkFirst.org), Bonnie Muntz-Pope, BSN, RN, CNRN, is so passionate about spreading its message: Prevention is the only “cure” for the devastations of motor vehicle crashes, violence, falls and sports and recreational mishaps among the young and education is the most important tool in avoiding life-changing accidents.

Focused exclusively on impressionable and accident-prone youngsters, ThinkFirst tailors its programs to distinct age groups with specific risk factors to consider. In addition to presentations by trained health educators, the program utilizes teams of volunteer VIP (voices for injury prevention) speakers to relate their own stories of how brain and spinal cord injuries have altered their lives.

The Think First movement has grown rapidly over the years and now boasts representation in all 50 states, much of Canada and countries as diverse as Italy, Colombia and Jamaica. There are 154 chapters in all.

After a distinguished career at MUSC, Muntz-Pope herself “retired,” only to take the helm of South Carolina’s Lowcountry chapter, which initially covered Charleston, Berkeley and Dorchester counties and now includes Colleton County as well.

A not-for-profit, the ThinkFirst National Injury Prevention Foundation offers award-winning, evidence-based programs tailored specifically for targeted age groups. In the Lowcountry, these range from “Street Smart” and “Superhero” presentations geared toward kids at schools such as Belle Hall Elementary to anatomy lessons and classroom activities to help children develop a practical understanding of their bodies’ limitations and vulnerabilities at venues including Thomas C. Cario Middle School to films to discussion groups and VIP presentations for teens at Wando High School.

While the youngest students learn the importance of safety seats in cars through demonstrations as a part of the Boost ’em In the Back Seat program and teens are encouraged to ask significant questions of their trauma-surviving VIP speakers, middle schoolers need special attention. According to Muntz-Pope, it’s not the tots who usually don’t know any better or the teens who should who are the most at-risk group.

“One big issue with the pre-teens,” she noted, “”is their desire to ride their bicycles without safety helmets. They can’t drive yet, but their hormones are raging, and they crave independence and mobility. They also think that they’re invincible.”

No matter which age group is being addressed, ThinkFirst team members work in formats from large group assemblies to interactive smaller workshops to encourage their young listeners to think long and hard before engaging in risky behavior.

Updating the old adage that it’s important to “look before you leap,” Muntz-Pope and ThinkFirst convey to all three age groups that “We want your brain to protect your body.”

For many of us, April 18 represents a looming and ominous deadline — Tax Day. Be it dread of the unknown, anxiety over how to navigate a complicated process, panic about penalties or stress about the … END_OF_DOCUMENT_TOKEN_TO_BE_REPLACED

Retiring from the fourth largest municipality in .the state of South Carolina after nearly 24 years of heading the Town of Mount Pleasant’s communications office is a momentous occasion for me. … END_OF_DOCUMENT_TOKEN_TO_BE_REPLACED

Perhaps you’ve noticed it as you’ve turned off Highway 17 onto Mathis Ferry Road, just past the first traffic circle. More likely than not, you haven’t paid it much attention. But that’s about to … END_OF_DOCUMENT_TOKEN_TO_BE_REPLACED