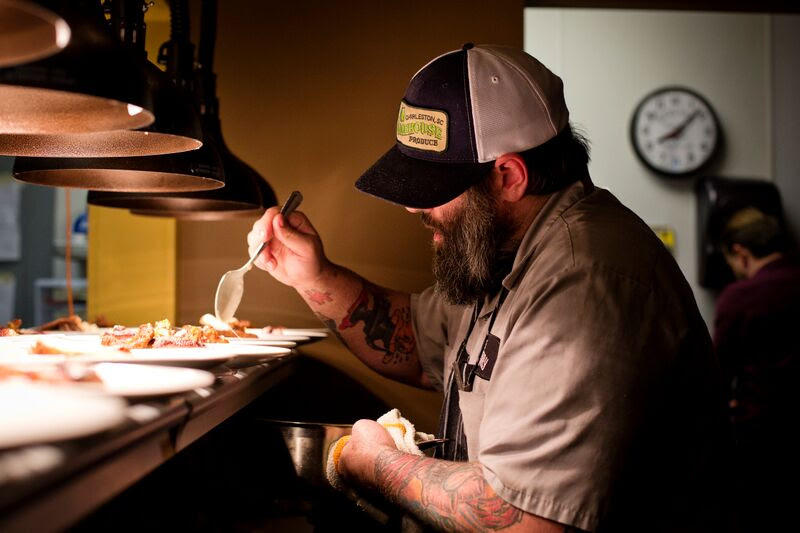 As executive chef and owner of The Granary, Brannon Florie works hard to deliver the very best flavors to patrons. Over the course of his career, he’s received warranted praise from foodies and critics alike. Writer Robert Moss named Florie’s pork chop one of the “Thirty Most Memorable Dishes” in Charleston – a meal that could sway even the staunchest vegetarians to rethink their diets. A native Charlestonian whose farming grandparents played an integral role in his journey to excellence, Florie honors his past and celebrates the present through his culinary ventures.

“The most rewarding aspect of this job is watching the faces of our customers when the food hits the table,” said Florie, whose road to restaurateur is built on countless hours in the food and beverage business. From his humble roots as a dishwasher to landing his first restaurant managerial position at the young age of 17, Florie is proof that through passion and persistence greatness can be achieved.

“Hospitality is our number one concern,” said Florie, who makes sure to always switch up the well-executed fare according to season. “We want people to feel at home and comfortable. No matter what happens, we want them to leave happy.”

With a diverse menu that offers up everything from Breach Inlet clams cooked in Westbrook White Thai to hanger steak complete with sunchoke purée, chimichurri and savory Yukon Gold potatoes, you are sure to find a meal that leaves you satisfied and smiling.

The Granary’s happy hour boasts a series of small plates, at prices that won’t strain your wallet: Savor a Moscow Mule in a chilled copper mug while sampling spicy fish tacos, veggie-laden flatbread and short rib and pork meatballs.

“With the upcoming season, we are expecting to see lots of nice local vegetables and seafood,” said Florie. “We also are putting extra attention on our charcuterie program, working on new salamis, sausages and hams.”

The options for brunch at The Granary are so varied, you are sure to find something for everyone in your Sunday-Funday crew. Those that savor the sweet can load up on cinnamon-orange brioche French toast, which is generously paired with strawberry cream cheese and topped with bourbon maple syrup. Shrimp ‘n’ grits, egg white frittata and biscuits and gravy all grace the star-studded menu that will no doubt have you wanting to make a visit to The Granary part of your Sunday ritual. With $5 mimosas, Moscow Mules and bloody marys, it’s the perfect way to close out the weekend.

Innovative, well thought out and never boring, The Granary’s meals speak to the creative integrity and vision that has kept Florie a fierce competitor in the game for so long.

In addition to The Granary, Florie has opened On Forty-One, where he also serves as executive chef. He lends his skill set and expertise to several Lowcountry restaurants, including The Rarebit and The Americano and has even crafted his own specialty hot sauce for his brand – FloKing. As if that wasn’t enough, he also can occasionally be found at the Mount Pleasant Farmers Market offering up homemade preserves and pickled kimchi.

“In the last five years, I have opened, consulted or operated seven different concepts and had two children,” said Florie. “None of that could have happened without my wife, Renee, especially the children part.”

Taste the best of the Lowcountry, in an environment where the food and ambience are on point with many of the popular eateries of downtown. For more information on The Granary, visit www.thegranarycharleston.com.

Photo courtesy of The Granary.

On this episode of Mount Pleasant Podcast, Fred Tetor, Retired Mount Pleasant Fire Chief who has been involved in more than 40 Christmas Parades in Mount Pleasant since 1972 talks with host Brian … END_OF_DOCUMENT_TOKEN_TO_BE_REPLACED

Charleston, S.C.: For forty years, Charleston Friends of the Library (CFOL) has given community members the opportunity to become more involved with Charleston County Public Library (CCPL) by … END_OF_DOCUMENT_TOKEN_TO_BE_REPLACED