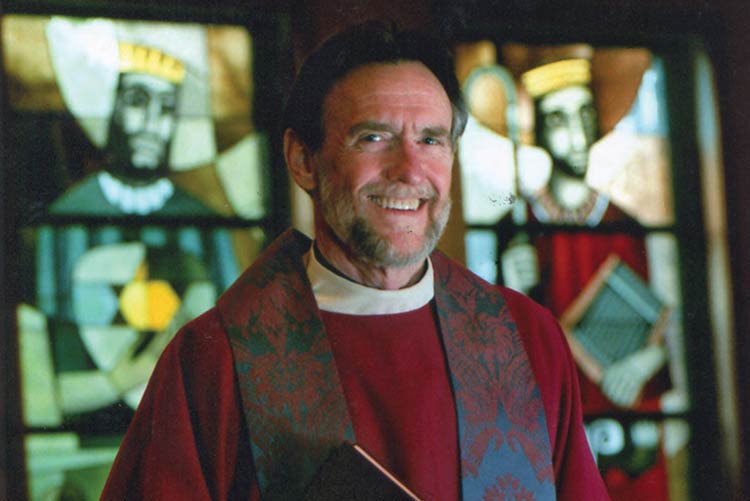 The walls of Monsignor Carter’s office are lined in bookcases stretching from the floor to the ceiling, but they are slowly starting to empty out. It’s easier to see what odds and ends remain on the shelves: a vial of water from Lourdes, France; a few paperback volumes of “the Greatest Catholic Parishes” (containing Christ Our King, naturally); and photographs of various significant moments in the Monsignor’s life. It’s my first time meeting the longtime pastor of Christ Our King, and I try to picture what the shelves looked like at their peak: the tremendous number of volumes that must have inspired him through decades of priesthood.

A native of Charleston who grew up on Broad Street and attended Mass – then was ordained as a priest in 1966 – at the Cathedral of St. John the Baptist, Monsignor James Carter – or “Jim” – said he never really wanted to be a priest. In fact, he chose pre-law as his focus in college, only to realize that attending seminary and entering the priesthood was a thought that he couldn’t quite shake off.

“I checked out the seminary,” he remembered, “thinking that it would help me make my decision, help me decide to be an attorney. But instead, I ended up staying there.”

What followed has been a robust journey which will culminate when Monsignor Carter retires in February. Although he has been at his current parish since 1989, he has served at a few other Catholic churches in the state, including Our Lady of Good Counsel on Folly Beach and Holy Spirit on Johns Island, his first assignment as head priest. At one point in those earlier days, the Monsignor said he was living on Johns Island and saying Mass for both Holy Spirit and Our Lady of Good Counsel on Sunday mornings, quite the commute, given the “gas crunch” of 1973. He solved the problem by purchasing a motorcycle to drive back and forth between Johns Island and Folly Beach, deciding to forgo his fuel-guzzling Mercedes-Benz.

“That car was worth more than the house I was living in at the time,” he said with a chuckle.

Following duties at St. Paul the Apostle in Spartanburg and St. Mary in Aiken, Monsignor Carter eventually found himself at Christ Our King in July of 1989, just a few short months before Hurricane Hugo knocked East Cooper off its feet. He described it as “coming home,” to be back in his Lowcountry. He relished the opportunity to serve the parish of Christ Our King – about half the size it is today – and the Catholic territory of East Cooper, which, in those days, stretched from the Cooper River Bridge to McClellanville and from the Intracoastal Waterway to the Wando River. Modest as his initial congregation was, the Monsignor would soon have his work cut out for him.

“After Hurricane Hugo, everything was a mess,” he said, explaining how the school, then a third of its size, was profoundly damaged, as was the “hall,” a building that housed Mass services before the current sanctuary was built. Those three buildings – the church, the hall and the school – would see major changes and additions after the storm. For one thing, Monsignor Carter decided to tear the hall down and make way for the present-day Life Center. For another, the thick forest of trees that stood behind the church would become the parish’s crowning beauty

“The trees had been knocked over by the hurricane (Hugo),” he said, “and the neighbors were complaining.”

Inspired, Monsignor Carter decided to solicit the assistance and artistic talent of the parish and create a garden where the fallen forest stood – a garden that would become a home for the Stations of the Cross. A local parishioner fashioned each station out of copper donated to Christ Our King. Other church members worked hard at creating a place of sacred beauty, and Monsignor Carter himself planted a live oak at the foot of each station. Today, the stately garden is home to an array of flowering foliage, birds and even a few fish in the lagoon. It’s an inviting place for quiet prayer, and the trees planted shortly after the storm have grown. It is, according to the Monsignor, “beautifully landscaped and well-tended by the head of gardens, Joey Bradshaw.”

But turning the parish grounds into a picturesque retreat after Hugo’s fierceness was just the beginning, as Monsignor Carter discovered. The residents of greater Mount Pleasant needed the support of his parish, and the charitable work would lead to the establishment of East Cooper Community Outreach (ECCO).

“We were first responders to victims of Hurricane Hugo,” he noted. “While I witnessed the extent of the hurricane’s damage, I saw pockets of poverty all over Mount Pleasant, and the people in these communities were devastated. But out of the tragedy, something good was born.”

As ECCO gained notoriety, Monsignor Carter continued to find numerous projects to work on. In fact, there are more than 100 ministries at Christ Our King, likely the reason the parish is listed in those aforementioned books on sensational Roman Catholic churches. Since Monsignor Carter’s arrival in 1989, the Catholic population of East Cooper has exploded, and Christ Our King has doubled in size. The latest addition to the church campus, known as “the beach house,” is a multi-generational facility, in the words of the Monsignor, modeled after his own grandparents’ house on Sullivan’s Island. It is meant to “create a dialogue” between the seniors and the youth in the parish and offer speakers and events of mutual interest. The Russell House, too, is a welcoming enclave on the campus, offering a free meeting space to organizations such as Alcoholics Anonymous.

“We’re a busy parish,” Monsignor Carter confirmed with a measure of pride. “We’ve also added to the school twice since I got here: additions to the original school as well as a new science wing.”

Then, of course, there is the meat-and-potatoes of what a monsignor does at the helm of his parish: inspire the church members with well constructed homilies for a variety of occasions. In fact, my friend Claire, who attended Christ Our King for many years and recently saw my Instagram photo of the gardens, asked me if I’ve begun attending, lauding Monsignor Carter’s “great” homilies for school Masses and even funerals. It’s clear that delivering the Word is a craft the monsignor takes seriously, and the more challenging the topic, the more he embraces it.

Those of us who are interested in reading an assortment of Monsignor Carter’s best homilies can pick up his book, “Let Me Tell You a Story,” curated by Mary Jeffcoat, the former editor of The Catholic Miscellany. The proceeds of the book – very popular so far! – benefit East Cooper Community Outreach. And here’s a tip: If you want to let the monsignor know how much you love his work, you’d better give him a call. He claims to not be “computer savvy” in the least. Indeed, there is no sign of a computer or even a smartphone in his office – that is, once I demurely tucked my own Android deep inside my purse.

“I take calls,” he said, “but people don’t seem to use the phone much anymore.” He laughed. “Even in the seminary, I knew a couple of guys who would type up my papers.”

And what will Monsignor Carter do with all his spare time once he has left Christ Our King? Enjoy it, for one, at his peaceful retreat on Edisto Island, which he described as “secluded.” Though an announcement for his replacement at Christ Our King had not been made at press time, the monsignor is adamant about not overshadowing the new priest but rather giving him a fair chance to bond with the congregation.

“In the past, when I’ve left a place, I haven’t gone back for that reason,” he mused.

That isn’t to say that he will disappear completely; he’ll still be the chief operating officer of ECCO, for one thing, and, who knows, he might show up one day in Mount Pleasant to have a bite at one of his favorite hangouts: Langdon’s, Bistro Toulouse and Bacco, to name a few.

“I figure I have said around 3,000 Masses here,” he said, adding that he still had a Christmas Mass to ponder and a funeral Mass to prepare before his departure.

No doubt his congregation will hang onto every last word.

People are drawn to the Lowcountry in large part because of the beaches, the salt marshes, the moss-draped oaks, the cypress swamps — the stunning natural landscapes that inspire awe and support an … END_OF_DOCUMENT_TOKEN_TO_BE_REPLACED

Click, Listen, Watch & Learn. Doug Holmes, "The Stats Guy" crunches and studies statistics in many fashions including the MLS in Charleston talks with host and publisher Bill Macchio about the … END_OF_DOCUMENT_TOKEN_TO_BE_REPLACED

John Powell, CEO and President of the Southeastern Wildlife Exposition (SEWE) talks with host Brian Cleary about the expo's art show featuring local and regional artists, and Powell talks about other … END_OF_DOCUMENT_TOKEN_TO_BE_REPLACED