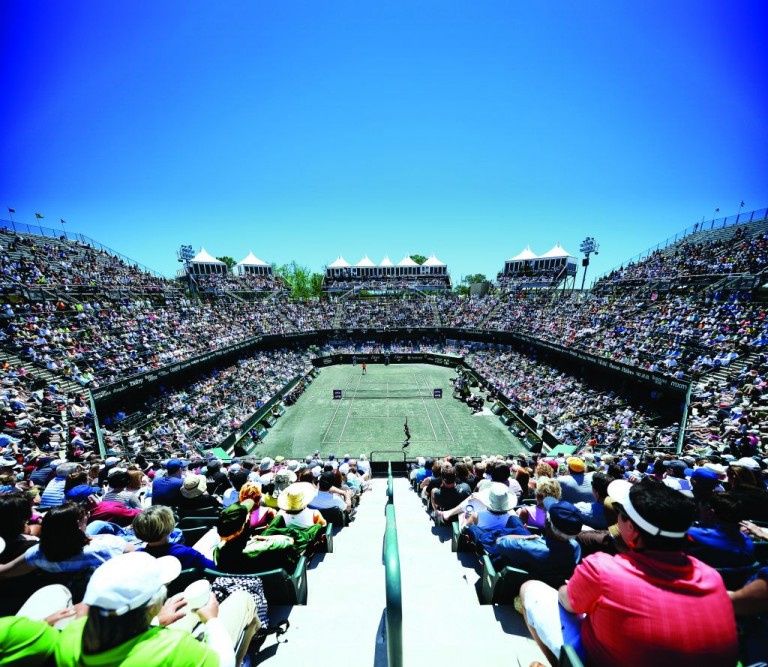 The annual women’s tennis tournament on Daniel Island, the Volvo Car Open – formerly the Family Circle Cup – is an incredible showcase of pro tennis players at the peak of their careers, and it’s a big event in the Charleston area every year. But it wouldn’t be the same without the 500 people who volunteer their time and energy every year to make it run.

Of those 500 volunteers, around 200 make up the ball crew, which consists mainly of teens and kids who spend the tournament on the courts with the players, making sure they have balls for serving. But don’t be deceived: Even though it sounds like an easy job, the ball crew goes through a rigorous program of training to earn the right to be on the court during the matches. They work hard.

“We’ve been told that we’re one of the better ball crews on the circuit,” said Felicia Sperr, Ball Crew Shift Leader at the Volvo Car Open.

Felicia returns this April as one of the trainers and leaders of the ball crew. She’s in her 16th year of volunteering with the tournament, which she called a fun event all around.

“I just love it,” said Sophie, who, as an avid tennis player herself, enjoys the educational aspect of being on the ball crew. “It’s fascinating to see how the professionals play, the techniques they use. There are players from all over the world, and you can see their different styles.”

This will be Sophie’s third year on the ball crew, which makes her a veteran. What are her highlights of her time on the crew?

“I did ball crew for Venus Williams, which was really awesome,” she said.

The main goal of the ball crew is to “make the players’ lives easier so they can concentrate on the game,” as Sophie put it. To make that happen, the crew goes through tryouts before embarking on a rigorous training for six Saturdays prior to the tournament, two hours per day. They work on skills such as rolling tennis balls up and down the court, tossing the balls to the players during a match and even things like how to properly hold an umbrella to shade a player when it’s hot. The crew also gets to actively practice their skills during actual matches, either between veteran ball crew members or for the College of Charleston.

When the tournament begins, volunteers are placed where they’re needed on the court and are rotated in and out frequently, especially when the temperature rises. With up to eight courts in use at a time and six people per court, they need a big crew from which to draw.

On the ball crew, there’s one place you really want to be, and that’s on the net, said Sophie, who has held that position for the past couple years.

“If you’re the net person, you’re really responsible,” said Felicia. “You have to get the balls from one end of the court to the other person, rolling them during the tie breaker. The net people need to have a ball in their hand, and the balls are switched every two points.”

Being on the ball crew is a prestigious position, she said, and a lot of kids will make it their goal to get there. Being close to the action is what it’s all about. Unsurprisingly, many ball crews members play tennis themselves, and all of them love the sport. That can mean they get a little star-struck when working with high-profile competitors such as Venus Williams and Angelique Kerber. During their training, they learn the rules of etiquette concerning how to approach the players. Volunteers aren’t allowed to ask for autographs when they are in uniform.

“Everybody’s on their ps and qs,” said Felicia. “They don’t bother the players.”

Sophie agreed that it can be tough to act professionally the whole time, but she said it’s worth it.

“As ball crew, we gain something more than just a signature. We get to be on the court with them,” she commented.

She would encourage anyone thinking about trying out for the ball crew to go for it – as long as they love tennis.

“You watch a lot of tennis throughout the day. It’s different when you’re watching from the stands. It’s a whole new experience,” she said.

Sophie will be meeting up with old friends on the ball crew this April, and her sister Olivia, 12, will be returning for her second year, too.

What kind of person would be a good fit for the ball crew?

“Somebody who’s focused and polite,” said Felicia. “You don’t necessarily need to be athletic or play tennis.”

You can start at age 10 if you play tennis or age 12 if you don’t because you wouldn’t be as familiar with the game. While the ball crew consists of mostly kids and teens, adults are welcome to try out as well. Felicia said they’ve had volunteers up to the age of 60.

To learn more or to apply for the ball crew, visit www.VolvoCarOpen.com and click on Volunteer, or call Danny Hayes at 850-980-1308.

The Volvo Car Open will take place from April 2 through April 10 on Daniel Island. Visit http://www.volvocaropen.com/ for information and tickets.

About the Volvo Car Open

The Family Circle Cup is now the Volvo Car Open. Volvo Car, USA reached an agreement last year with the Meredith Corporation, the media company that owns popular magazine titles including Family Circle, Shape and Better Homes and Gardens, to become the title sponsor of the tennis tournament.

The new sponsorship and name change, which was announced in August, came a few months after the news that the Swedish automaker plans to open its first American plant in South Carolina. The plant will be located in northwestern Berkeley County near Ridgeville and is expected to create 2,000 jobs within the next decade.

Volvo Car, USA has a three-year contract for the title sponsorship of the Women’s Tennis Association premier event. Nothing else about the women’s only tennis tournament, which began in 1973 and has been held on Daniel Island since 2001, is expected to change.

Rebecca Imholz, Director of the Mount Pleasant Chamber of Commerce talks with host Brian Cleary about the 2nd Annual Dine Where You Live Campaign which is a proactive reaction by Mount Pleasant to … END_OF_DOCUMENT_TOKEN_TO_BE_REPLACED

For many of us, April 18 represents a looming and ominous deadline — Tax Day. Be it dread of the unknown, anxiety over how to navigate a complicated process, panic about penalties or stress about the … END_OF_DOCUMENT_TOKEN_TO_BE_REPLACED

Retiring from the fourth largest municipality in .the state of South Carolina after nearly 24 years of heading the Town of Mount Pleasant’s communications office is a momentous occasion for me. … END_OF_DOCUMENT_TOKEN_TO_BE_REPLACED