I proposed to my wife, Allison, at the end of a sailboat race on Charleston Harbor. Since I was in my teens, I’d always wanted to propose this way.

The biggest obstacle was finding a sail to get the message on; I don’t own a boat. However, I do crew for people, and the owner of “The Level Pelican” happened to have a sail that had been destroyed in a windy race. I asked him if he would let me put it back together could I tape the message on it. He said sure. 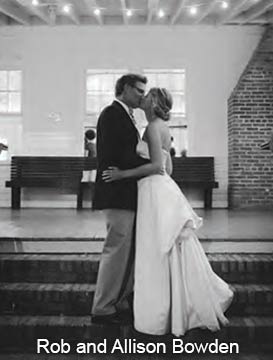 So Charleston Sail Loft put the sail back together and gave me the tape and their floor space so I could put the message on. Things were running tight as I was taping the message on at noon for a 6 p.m. race, and I still hadn’t picked up or seen the custom ring I had made at Sohn & McClure Jewelers. I picked up the ring at 4 p.m., figured it looked good enough and off I went.

The second obstacle was figuring out how to propose from a boat in the middle of the harbor and then actually get to say the words, get a response and hopefully put the ring on her finger when she was not on the boat!

So with the help of some great friends, I coordinated a small boat party on the family powerboat to follow us around the harbor during the race. When the sail went up, they would come over so I could jump from one boat to the other and properly pop the question.

The third obstacle was don’t drop the ring! Thinking about this ahead of time, I’d managed to stow away the ring on the powerboat before the race and before any of the party had boarded.

The fourth and unexpected obstacle was rain! Yep, it was a total white-out storm 30 minutes before the race started, and wife to be had no interest in a boat ride during a downpour. However, great friends with good beer managed to twist her arm and get her on board. The rain stopped just before the race started and then held off just long enough for us to get around the course and get the deed done before the sky opened up again. The guys had a great time spraying each other with champagne dockside in the pouring rain.

The quote of the day came from the clueless crew member from the boat during the champagne hose down: “I don’t know why ya’ll are so excited. We finished third.” Yep, he’d been on the boat the whole time and completely missed the proposal. He never saw the message on the sail, even though he was the guy who put it up and sailed on the boat with it for 30 minutes!

The day we got engaged, my husband, Mike, got out of work early because we had big plans for that night – Florida 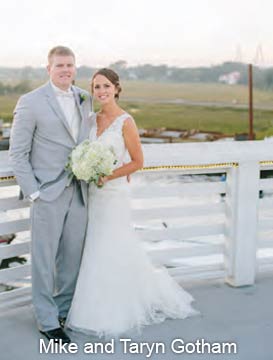 Georgia Line concert! The night before, he said he wanted to walk the bridge when he got home to get in some kind of workout before the concert. I was really excited about it – the bridge is my favorite spot in Charleston, and we hadn’t walked it together in a long while. There was a meeting at work, so he got home an hour later than I expected, so I was rushing him to get to the bridge. We booked it up the hill – one of my fastest times ever walking that portion of the bridge, according to MapMyRun – but I slowed down when we got to the first tower.

There was a girl holding a sign that said “Taryn.” I didn’t recognize the girl, so my first thought was “that’s so weird that there’s another Taryn walking the bridge right now. But this isn’t an airport. Why is someone holding a sign with a name on it?” Then another girl popped out holding a sign that said “Will you,” and again, I didn’t recognize her, so I had no idea what was going on. The last girl – a friend of ours who Mike works with – popped out holding a “marry me?” sign. I turned to Mike and he was down on one knee with a ring in his hand.

I was in shock. I thought we were working out! I (obviously) said “yes,” and Mike got major points for not only surprising me but doing it in my favorite place. It gave me a whole other layer of love for the bridge!

After dinner at Liberty – one of our favorite spots and the future location of our rehearsal dinner – the rest of the night was spent celebrating with Nelly, Florida Georgia Line and my brand new fiancé!

My husband, Danny, and I met through a mutual friend in 1999. We dated for about three years and knew we were meant to be together. We actually knew that after our first date but didn’t want to get crazy and rush into anything. 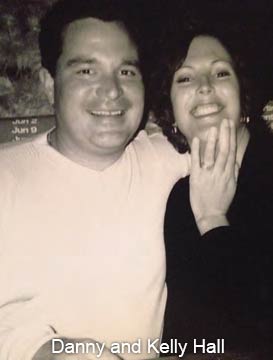 I was working on a Friday afternoon. My girlfriend, Debbie, who introduced us in 1999, decided she wanted happy hour. She wanted to go out to Folly. That’s normal for us; we spent lots of time out there. I went home after work, and then Danny drove us out to Folly. On the way out, on Folly Road, he started acting like his car was breaking down. He was “playing” with the gas pedal. He pulled over on the side of the road. I was concerned and just looking around and asking if we should call a tow truck. Danny started to laugh and told me to look to the right. It was the boat on Folly Road. He painted the proposal on the boat! It was awesome! I thought he was just at home hanging out, but nope! He was painting it all by himself! He pulled out the prettiest ring ever and asked me to marry him! I was thrilled! I loved how he did it.

We celebrated with friends and karaoke at the old Holiday Inn on Folly – now Tides. We were married in October 2003 on the beach in front of the hotel. Best time ever!!

Click, Listen, Watch & Learn. Doug Holmes, "The Stats Guy" crunches and studies statistics in many fashions including the MLS in Charleston talks with host and publisher Bill Macchio about the 2022 … END_OF_DOCUMENT_TOKEN_TO_BE_REPLACED

John Powell, CEO and President of the Southeastern Wildlife Exposition (SEWE) talks with host Brian Cleary about the expo's art show featuring local and regional artists, and Powell talks about other … END_OF_DOCUMENT_TOKEN_TO_BE_REPLACED

I’m sure you’ve heard the saying, “a picture is worth a thousand words” or “it takes a village.” Both of these popular expressions apply to the journey I recently embarked on, which culminated on … END_OF_DOCUMENT_TOKEN_TO_BE_REPLACED