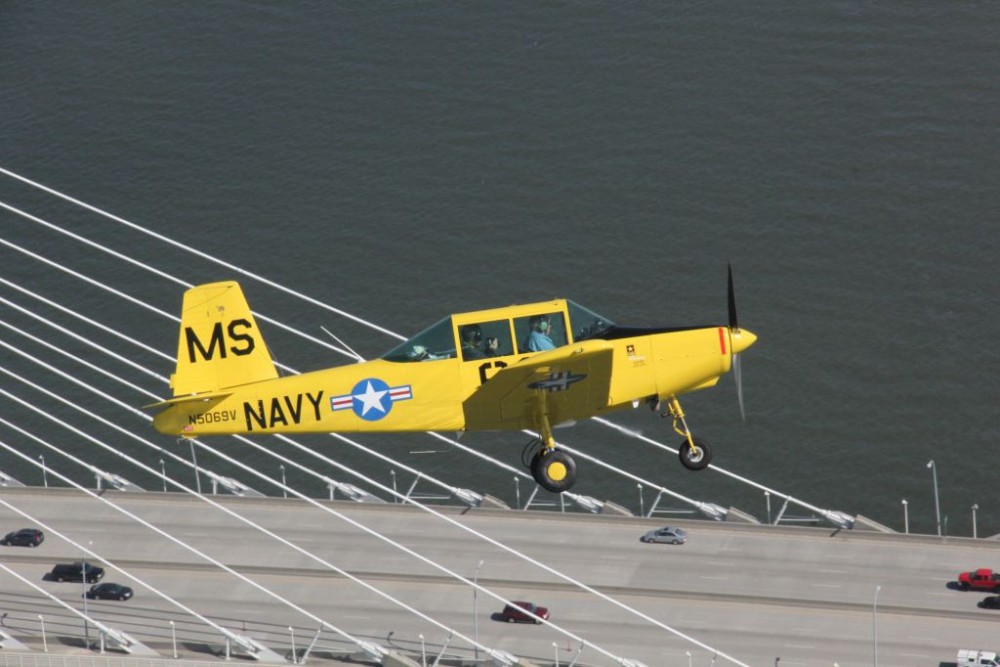 I park my car no more than 100 yards from what passes for an airport terminal, reveling in the realization that I won’t have to pull out a credit card when I leave the premises. I won’t be hassled by an overzealous TSA agent, nor will I have to decide which bags to check and which to carry on – there’s no room for either on this trip. And when I walk through the front door, there’s no sign of seemingly thousands of harried travelers rushing to their connecting flights, gulping down a final bite of fast food or desperately seeking the comfort of one last earthbound bathroom break.

Instead, I encounter a small group of men, sipping coffee, trading tales of the wild blue yonder, philosophizing about a hobby that has all but consumed their lives and simply enjoying one another’s company.

Welcome to the Mount Pleasant Regional Airport, a 3,700-foot-long, 75-foot-wide runway, six hangars, a few other buildings and three flight schools, all located on a 300-acre site just west of the Carolina Park soccer fields and bounded on one side by a road named for a local aviation legend. The airport’s brain is the Charleston Aviation Authority; its heart is the East Cooper Pilots Association, a tightknit group of men and women who enjoy a meaty conversation, get a kick out of helping others and, most of all, love to fly.

The Association has been around since 1996, 10 years after the airport was established in what was then a rural area north of Mount Pleasant. Its first president, Mike McCurdy, a former police officer in Mount Pleasant and on the Isle of Palms, took the helm of the organization in 2004 and again in 2016. He said between 25 and 35 people usually attend ECPA meetings, though membership seems to be a difficult concept to define.

“The dues are $20 a year, but we don’t really keep track,” he explained during an interview at Craft Flight Training & Simulation, his flight school at the Charleston International Airport.

McCurdy, a flight instructor since 2002, has no real interest in establishing stricter membership guidelines – you don’t have to be a pilot to join – but he does want to raise the organization’s awareness in the East Cooper community. The Association already contributes by participating in Relay For Life, which raises funds to fight cancer, and also helps out with Boy Scout and Girl Scout events. Members have even helped out in search parties for avian residents of The Center for Birds of Prey who have lost their way.

And, on occasion, members are called on to carry out a more important job.

“Some people, usually radiation patients, can’t take long flights, so we carry them on shorter hops,” said Pat Waters, longtime treasurer of the organization, grandson of legendary military icon Gen. George Patton and my guide and pilot during a short flight around and above East Cooper. “A pilot might bring the patient from Jacksonville to Charleston, then another one takes the patient from Charleston to Raleigh.”

On the social side, members of the East Cooper Pilots Association participate in the South Carolina Breakfast Club. The organization has been flying into small airports in South Carolina and surrounding states every other Sunday since 1938. They eat a large breakfast together and sit around talking about airplanes, aviation or any other subject they find interesting. The Mount Pleasant Regional Airport hosts the Breakfast Club once a year, in November.

McCurdy refers to such events as fly-ins, but he said ECPA members also enjoy a few fly-outs as well.

“A bunch of us will get in our planes and fly to Jekyll Island, Georgia,” he explained. “There’s a really nice hotel there with an unbelievable brunch. Anywhere from five or six to 10 or 12 of us will go, some in their own planes and some who hitch rides with others.”

Last year, ECPA members participated in a poker run, flying into six different airports, each time picking up one playing card. The pilot who returns to the starting airport with the best poker hand wins.

McCurdy, an Isle of Palms policeman at the time, started flying after Hurricane Hugo swept across the Carolina coast in 1989, mostly to take his mind off the devastation wrought by the large and violent storm.

“I needed therapy so I started flying,” he said.

“I love the mechanics of aviation. It’s only you and God. It’s peaceful, away from life’s issues. People drive and talk on the phone. When you are flying, all you are doing is flying.”

Waters flies his bright yellow Varga for fun, but he also owns a Comanche that he uses when he leaves the Mount Pleasant area. He sometimes travels on business as a member of the board of the General George Patton Museum and Center of Leadership in Fort Knox, Kentucky, and he also serves on the board of Roper Hospital and is District 1 commissioner for the South Carolina Aeronautics Commission.

Like many other members of the East Cooper Pilots Association, Tommy Teasley can claim a connection to the area’s aviation history. His 1947 Piper Club Special was the property of the late Woody Faison, whose name graces the road from Highway 17 to the airport. Teasley obviously enjoys relating a story about the aviation legend. Faison, who passed on to that great airport in the sky shortly before his 90th birthday, was still teaching pilots to fly at the age of 89. On one occasion, his plane, with a student aboard, lost an engine, so he calmly landed it on the beach at Dewees Island.

Why does Teasley, 68, continue to fly?

People are drawn to the Lowcountry in large part because of the beaches, the salt marshes, the moss-draped oaks, the cypress swamps — the stunning natural landscapes that inspire awe and support an … END_OF_DOCUMENT_TOKEN_TO_BE_REPLACED

Click, Listen, Watch & Learn. Doug Holmes, "The Stats Guy" crunches and studies statistics in many fashions including the MLS in Charleston talks with host and publisher Bill Macchio about the … END_OF_DOCUMENT_TOKEN_TO_BE_REPLACED

John Powell, CEO and President of the Southeastern Wildlife Exposition (SEWE) talks with host Brian Cleary about the expo's art show featuring local and regional artists, and Powell talks about other … END_OF_DOCUMENT_TOKEN_TO_BE_REPLACED