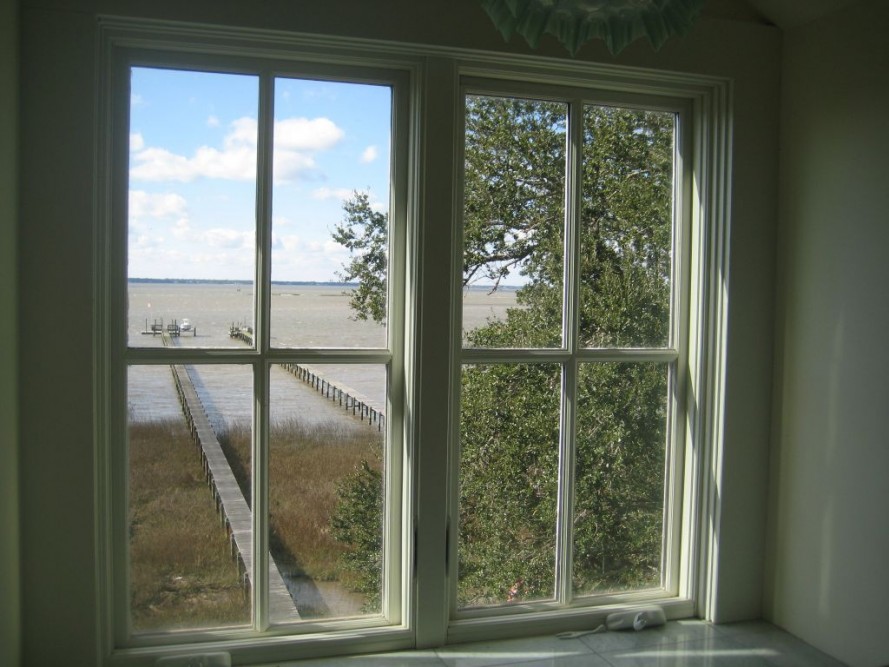 As any boater can tell you, navigating Charleston Harbor can be a tricky proposition because of its many sandbars and oyster beds. That challenge is of particular importance for the large commercial vessels entering and leaving this busy port city. Today, modern technology enables harbor pilots to guide ships safely through the main channel. But more than a century ago, ships relied on several lighthouses to keep them on track. One such beacon was the Mount Pleasant Light, located in what is now known as the Old Village.
Designed and built in 1858 by the federal government, the lighthouse and adjoining keeper’s house sat atop the 14-foot high bluff at the water’s edge of Bank Street. Situated directly across the harbor from the Morris Island Lighthouse and at a right angle to the steeple of St. Michael’s Church in downtown Charleston, it was part of a geometric configuration that encircled the harbor.
The local newspaper reported at the time it was built that the beacon was to primarily assist the Mount Pleasant steamers going at night through Hog Island Channel. The Charleston Mercury reported that it would be “a beautiful wooden structure in the Italian style of architecture.” The federal government spared no expense with this project, spending $2,265 for its construction. Specifications for both the light and the keeper’s dwelling were written by the U.S. Lighthouse Board.
Board and batten siding, a vertical pattern using planks of varying widths, was used to give the house the unique appearance similar to other such structures. The absence of windows on the gabled ends of the house ensured stability from storms. Mortise-and-tenon joint construction, an age-old tongue-and-groove technique, also helped with the lighthouse’s structural integrity.
Local historian Robert Stockton, who has researched the property, discovered that the lighthouse was a fixed light (rather than a revolving one) and visible for 10 miles when lit, but its light was intended for use mostly within the harbor. All the lighthouses in Charleston were extinguished by Confederates during the Civil War to deter Union ships from entering the harbor. Although the Mount Pleasant tower survived the war, the light was never reactivated. Stockton surmised that it was later heavily damaged by a series of devastating hurricanes since it was subsequently removed. The keeper’s house, however, remains intact.
After World War II, the federal government decommissioned many of its military holdings in the Charleston area and sold the property. There have been eight homeowners since then, including the grandparents of prominent attorney and preservationist Gedney Howe III, and local physician Dr. Archibald J. Buist Jr. Tim Scrantom and Leigh Owen Wilkes bought the property three years ago and have made a few additions to the house. Because the structure is on the National Register of Historic Places, they said their alterations required permission from the Old Village Historic District Commission.
The three-story wooden house was originally 2,200 square feet with two rooms of living space on the first floor, two bedrooms on the second and an attic room on the third. The homeowners have learned that there was a doorway on both the first and second floors leading from the house directly into the 44-foot-high lighthouse tower. The pillars left from the tower’s foundation mark the structure’s exact location.
A small brick building dating to about 1900 also is on the property. Scrantom explained that it was used to store whale oil and kerosene for the buoys in the harbor.
“Part of the light keeper’s job was to go out in a small boat and light the buoys. That responsibility continued even after the lighthouse was gone,” he said.
Scrantom noted that the structure still smells like oil inside.
A small cistern and a root cellar which is now used as a wine cellar also remain on the property. A previous homeowner had sheetrock installed over the fireplace in the kitchen, and the wood plank floors show a small burned, blackened mark, hinting at what was behind that wall. A subsequent owner removed the sheetrock and the fireplace is again in use.
The curved stairway leading to the second floor is original, and there is a small brass medallion about the size of a half-dollar imbedded in the newel post of the bannister. Scrantom believes that the original deed to the house may be rolled up and hidden inside the hollow post, as was the custom when the house was constructed.
The current owners are happy to be preserving the history of their unique property.
“We even have a list of all the light keepers and their family members who have lived here,” Wilkes said.

Owner JD Cooper Talks Shop, Shutters and Staying Power What led to your success? I am a native Charlestonian and have always loved the water. At age 15 I became a commercial fisherman. As our town … END_OF_DOCUMENT_TOKEN_TO_BE_REPLACED

When Pitt Street Pharmacy took root in the 1940s in what is now Old Village in Mount Pleasant, it was one of many such pharmacies across the U.S. Now, it’s not only a rare original find; its … END_OF_DOCUMENT_TOKEN_TO_BE_REPLACED

Every little girl dreams of her wedding day — the elegant wedding cake with dozens of layers, the perfect venue decorated with gorgeous flowers and, most importantly, the show-stopping wedding dress … END_OF_DOCUMENT_TOKEN_TO_BE_REPLACED