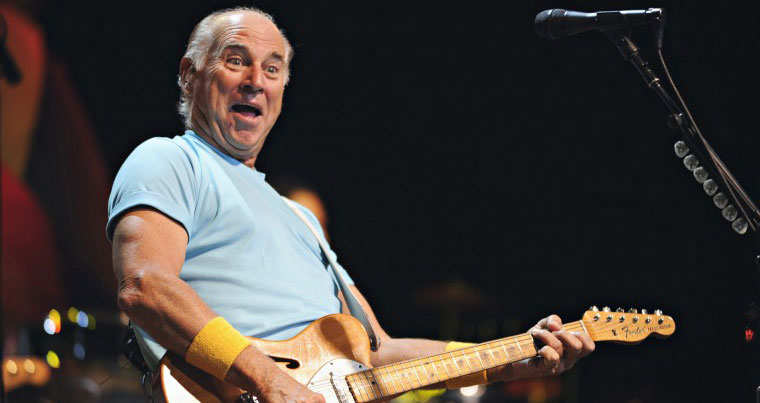 Parrot Heads are a special breed. You can usually spot them by the Hawaiian shirts, distinct smell of coconut oil and margarita-clutched fists. Their common love for the island-vibed music scene, cultivated by the king of cool, Jimmy Buffett, keeps this flock tight. Recently, this tropical crooner announced a 2017 tour, and one stop on Buffett’s upcoming circuit will be Daniel Island’s Volvo Car Stadium. On May 11, he will be playing to the delight of many a diehard fan, committed to his beachy blend of feel-good tunes. Proving the early bird gets the worm, his DI gig sold out in mere minutes – leaving many fans without tickets and forcing them to turn to scalpers to secure a seat.

Those who don’t completely understand the cheeseburger-in-paradise appeal may ask, “What is the draw?” What’s the secret sauce that summons millions to throw on a lei and sway along to songs about sand, sunsets and salt? For many, Buffett offers up tranquility. A Zen master, armed with a guitar and flip-flops, he brings fans to their happy place. It’s those changes in latitudes, changes in attitudes. Nothing remains quite the same.

“I’ve seen almost 100 different acts in concert in my lifetime, and Jimmy Buffett was easily one of my favorite concert experiences,” said local fan Joel Cardwell. “You’ll know every word to every song and the crowd is legendary for their participation and enthusiasm! It’s a must-see show.”

For the Lowcountry Parrot Head Club, a Mount Pleasant-based group dedicated to keeping the tiki torches burning bright, Buffett’s upcoming tour date is like New Year’s Eve and Christmas morning rolled into one. Since 1997, this group has come together to celebrate the musical styling of a man they admire and give back to the community at the same time. On Feb. 25, the club hosted a Mardi Crawl on Shem Creek to raise funds for Pet Helpers and The Alzheimer’s Association.

“There are so many layers to a Jimmy Buffett concert,” said Lowcountry Parrot Head President Kris Moore. “First are the Parrot Heads in the audience that dress up in their Parrot Head regalia. The imagination in these outfits would make you smile. It’s like a 3D Buffett song – grass skirts, island shirts, leis, specially decorated hats and flashy blinky things galore. Then Jimmy comes on stage with stories and songs that take you on a journey of pure enjoyment.”

Back in 2016, Buffett paid a trip to The Holy City and stopped into Cane Rhum Bar on East Bay to enjoy cocktails, which leaves many wondering if he will visit any Mount Pleasant bars.

“First timers will experience a mini-vacation without leaving their backyard,” said super fan Ryan Shrum, who was able to purchase tickets online even after Ticketmaster blocked the IP address of his workplace due to the influx of folks logging on. “Parrot Heads both new and old embrace one another and have a true all-community tailgate. It will be 5 o’clock in Charleston for a good few hours on May 11.”

Win free tickets from Mount Pleasant Magazine to the May 11 Jimmy Buffett concert on Daniel Island. Visit www.SeeJimmyBuffett.com to find out how you can register.

Owner JD Cooper Talks Shop, Shutters and Staying Power What led to your success? I am a native Charlestonian and have always loved the water. At age 15 I became a commercial fisherman. As our town … END_OF_DOCUMENT_TOKEN_TO_BE_REPLACED

When Pitt Street Pharmacy took root in the 1940s in what is now Old Village in Mount Pleasant, it was one of many such pharmacies across the U.S. Now, it’s not only a rare original find; its … END_OF_DOCUMENT_TOKEN_TO_BE_REPLACED

Every little girl dreams of her wedding day — the elegant wedding cake with dozens of layers, the perfect venue decorated with gorgeous flowers and, most importantly, the show-stopping wedding dress … END_OF_DOCUMENT_TOKEN_TO_BE_REPLACED