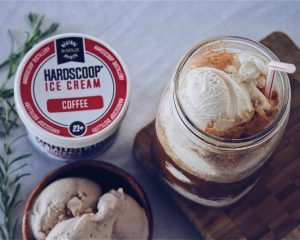 “Sixteen proof is pretty much a golden ratio of ice cream and alcohol. If you go below, what’s the point? If you go above, it won’t stay frozen to perfection,” said Jason Kirby, president of the innovative company.

Hardscoop Distillery is a truly local team effort. Kirby runs the company along with his brother-in-law, Chris Ledbetter, good friend Rachel Solomon and parents – Kirby’s dad is the CEO and his mom manages their federal alcohol compliance. Together, they dream up flavors and taste-test them to perfection.

“I don’t think it could have been any more perfect,” added Kirby, who opened the shop four months ago on a fast-developing stretch of Clements Ferry Road, which is bringing streams of curious passersby into the distillery.

“Everything that we do, we do months ahead of time because of federal alcohol regulations,” said Kirby, who gathers everyone around the company’s de facto dining room table to dream up each future flavor.

After dedicating weeks to perfecting the flavor, the ice cream has to be tested and approved by federal labs and government regulators because it’s an alcohol product. Then it is truly ready for production in Charleston and shipping to Hardscoop’s growing list of retail partners, including Bottles Beverage Store, Boone Hall Farm Market, North Charleston Coliseum and Performing Arts Center, The Sanctuary at Kiawah and as far as Columbia and Fort Mill. With a federal and state liquor license that allows Hardscoop to distribute across state borders, Kirby plans on expanding even further throughout the Southeast.

“The plan was for the tasting room to only be open Friday afternoons and to focus on distribution,” said Kirby, but Charlestonians have made the Hardscoop Distillery a destination. “We put up a sign that says ‘alcohol + ice cream’ on it, and people just have to try it.”

Now they are open Monday through Saturday, with free samples and pints to take home.

Hardscoop has come a long way from when Kirby and Solomon started, testing flavors themselves in an old-fashioned Rival electric ice cream maker. Now the team is in the process of crafting and taste-testing several new spirits that will be for sale in the near future. Kirby said they are always creating innovative offerings. After all, Hardscoop falls into the imaginative “Distilled Spirits Specialties” category.

Hardscoop is still all about family and enjoying a treat. The distillery, which is available to rent for events, parties and game days, is the Hardscoop team’s home away from home. Recently, Kirby filled the tasting room with friends and family to watch the Mayweather vs. McGregor fight while enjoying sweet 16 proof treats – because nothing brings people together like liquor and ice cream.

People are drawn to the Lowcountry in large part because of the beaches, the salt marshes, the moss-draped oaks, the cypress swamps — the stunning natural landscapes that inspire awe and support an … END_OF_DOCUMENT_TOKEN_TO_BE_REPLACED

Click, Listen, Watch & Learn. Doug Holmes, "The Stats Guy" crunches and studies statistics in many fashions including the MLS in Charleston talks with host and publisher Bill Macchio about the … END_OF_DOCUMENT_TOKEN_TO_BE_REPLACED

John Powell, CEO and President of the Southeastern Wildlife Exposition (SEWE) talks with host Brian Cleary about the expo's art show featuring local and regional artists, and Powell talks about other … END_OF_DOCUMENT_TOKEN_TO_BE_REPLACED