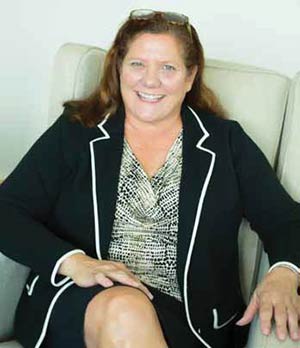 I have more work to do. It’s a great town and a great job.”
– Linda Page

Linda Page arrived in Mount Pleasant when she was only 6 weeks old. She and her mom and dad and two brothers put down roots in the sleepy little suburb of Charleston because their travel trailer couldn’t fit across the Grace Memorial Bridge.

As Page tells the story, her father brought the family from Northern Virginia while he was doing electrical work on the Air Force base in North Charleston. As they were leaving, a gas station attendant asked where they were going, then informed them that the trailer they were hauling wouldn’t fit across the bridge.

They could have found another route out of Mount Pleasant, but their decision to stick around might have had a major effect on the history of the town. If they had headed north on that fateful day in 1959, she would never have served as mayor, the iconic Page’s Thieves Market would never have been established and a restaurant other than Page’s Okra Grill would be the most popular eatery in Mount Pleasant.

“This is just the kind of place that if you spent any amount of time here, you’d want to stay,” said Page, explaining why her family didn’t spent a whole lot of time figuring out how to leave the Lowcountry behind. “It was idyllic, to say the least. Everyone knew everyone. It was a fantastic place to be.”

Not long after they chose to stay in Mount Pleasant, the Pages opened the Thieves Market, moving the business in 1964 to its current location on Ben Sawyer Boulevard.

Linda, who would have been part of the first class to spend four years at Wando High School had she not graduated a year early in 1976, intended to attend the University of South Carolina. Her plans changed, however, because of her parents’ failing health. She and her brothers, Mike and Tony – now deceased – took over the family business. Linda has been the sole owner of the Thieves Market since 1981.

Entrepreneurship runs in the family. In 2006, Tony’s daughters, Courtney and Ashleigh, opened Page’s Okra Grill, and three years later moved it down Coleman Boulevard to its current spot near Shem Creek.

“We had grown up in a family business. We were all business owners and hard workers, and Tony and I saw the opportunity to help the girls get started,” Page said.

Though she lived in Mount Pleasant for the better part of five decades, Page didn’t get involved in politics until 2009, when she funded her own successful campaign for a seat on the Town Council.

“People were tired of hearing me complain and urged me to do something about it,” she said. “So I did. I ran for the Council.”

After four years on the Council and serving on key committees such as Planning and Finance, Page ran a successful campaign for the mayor’s seat in 2013.

“I think things happen for a reason,” she said. “I ran so people would become engaged and they have.”

“I have more work to do,” she added. “I want to protect the financial stability of the town. It’s a great town and a great job. The reason people want to come here is because it’s so wonderful. It’s safe, taxes are low and there’s a natural beauty. People are drawn to this place.”

Owner JD Cooper Talks Shop, Shutters and Staying Power What led to your success? I am a native Charlestonian and have always loved the water. At age 15 I became a commercial fisherman. As our town … END_OF_DOCUMENT_TOKEN_TO_BE_REPLACED

When Pitt Street Pharmacy took root in the 1940s in what is now Old Village in Mount Pleasant, it was one of many such pharmacies across the U.S. Now, it’s not only a rare original find; its … END_OF_DOCUMENT_TOKEN_TO_BE_REPLACED

Every little girl dreams of her wedding day — the elegant wedding cake with dozens of layers, the perfect venue decorated with gorgeous flowers and, most importantly, the show-stopping wedding dress … END_OF_DOCUMENT_TOKEN_TO_BE_REPLACED