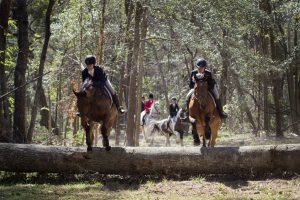 I so enjoy the process of hunting from beginning to end:  preparation, planning and pursuit. Hunters connect with their surroundings (familiar and foreign), their quarry and their companions. It has been said that the “close encounters” with animals are the cornerstone of the true sportsman. Regardless of the activity, the risks and rewards are fulfilling for the outdoorsman.

The sport of mounted foxhunting, whether live hunting or drag hunting, has deep roots in America. Records indicate that English foxhounds were imported as early as the late 1600s in Maryland. It is documented that George Washington was an avid, lifelong fox hunter who maintained meticulous records of his encounters in the field. Fox hunting has evolved and been refined over the last 300 years yet has maintained its rich traditions and disciplines.

“This sport fosters a deep respect for hound, horse and, yes, the fox, among all who participate,” said Julian V. Brandt III, an avid Lowcountry outdoorsman.

The hierarchy of a fox hunting club is well defined and steeped in rich tradition. The master of foxhounds or joint master leads the group. He is supported by a team of well-trained members known as “staff,” who dress during hunts in formal attire, wearing red or scarlet coats, often referred to as “pinks,” white breeches and black riding boots. The term “pink” refers to the English tailor Thomas Pink and not the color of the coat. The huntsman is the leader in the field.  He or she controls the hounds and sets the pace of the hunt. The huntsman is supported by whippers-in, who assist in controlling the hounds and maintaining the integrity of the field during the hunt. Field masters lead the field, comprised of three flights of riders. Each flight consists of riders with varying levels of skill and ability. The first flight, the most skilled and experienced riders, follow their field master and typically jump every obstacle he jumps while maintaining the fastest pace of the three flights. Second flight riders follow their field master, but jumping is optional. Third flight riders are generally less experienced or young riders on ponies – or those who choose to ride at a slower pace.

The huntsman controls the route and tempo of the field, making adjustments as needed, and as directed by the master and the ever-changing conditions. The secretary supports the field master and documents and reports all necessary information for the good of the club and owner of the land where the hunt is taking place.

The two styles of fox hunting are live hunting and drag hunting. Clubs that practice live hunting in the field hope to pursue a red or gray fox, or, more commonly today, a coyote. This hunting style is dynamic and unpredictable. The “fox” in drag hunting is a rider who uses a synthetic scent to mark areas along a predetermined route for the hounds and field to follow.

Mounted fox hunting has grown in popularity since the Colonial period. According to the Masters of Foxhounds Association & Foundation, there currently are more than 156 organized clubs in North America, and hunts take place in 37 states. Equestrian organizations such as White Horses, LLC, in Huger, South Carolina, owned and operated by Michael and Natasha “Tash” McCarthy, use mounted fox hunting as a means of teaching and training their students.

“Fox hunting allows our students to leave the competition ring and hit the galloping woods for a little while,” said McCarthy.

The McCarthys are members of the local Middleton Place Hounds, which has been an organized club in the Charleston area since 1977. Middleton Place Hounds hunts at Middleton Plantation and Millbrook Plantation.  A drag hunt club, Middleton hunts three days per week during the season. According to McCarthy, guests and visitors are  both welcome and encouraged. Visitors may ride along in the Tallyho Wagon, watching the action and enjoying fine food and drink during intermissions along the way.

I recently attended a closing meet – the last hunt of a season – with a local club. Once greeted by my host, I was directed to a small clearing where some tables were prepared with white linen tablecloths, champagne and port wine. As guests and visitors gathered under the majestic oaks, the huntsman approached with a pack of hounds in tow. He entered the clearing followed by his “staff.  The whippers-in quickly took their positions with military-like precision around the clearing, keeping the hounds grouped together. Once all of the riders and guests were gathered, the master proceeded to welcome all attendees, make club announcements and offer a toast before the hunt. When the meet, or welcome, was adjourned, the huntmaster led his hounds and staff into the field in pursuit of their quarry. The sound of the hounds “speaking” soon filled the morning air, which brought many smiles to the field.

Owner JD Cooper Talks Shop, Shutters and Staying Power What led to your success? I am a native Charlestonian and have always loved the water. At age 15 I became a commercial fisherman. As our town … END_OF_DOCUMENT_TOKEN_TO_BE_REPLACED

When Pitt Street Pharmacy took root in the 1940s in what is now Old Village in Mount Pleasant, it was one of many such pharmacies across the U.S. Now, it’s not only a rare original find; its … END_OF_DOCUMENT_TOKEN_TO_BE_REPLACED

Every little girl dreams of her wedding day — the elegant wedding cake with dozens of layers, the perfect venue decorated with gorgeous flowers and, most importantly, the show-stopping wedding dress … END_OF_DOCUMENT_TOKEN_TO_BE_REPLACED