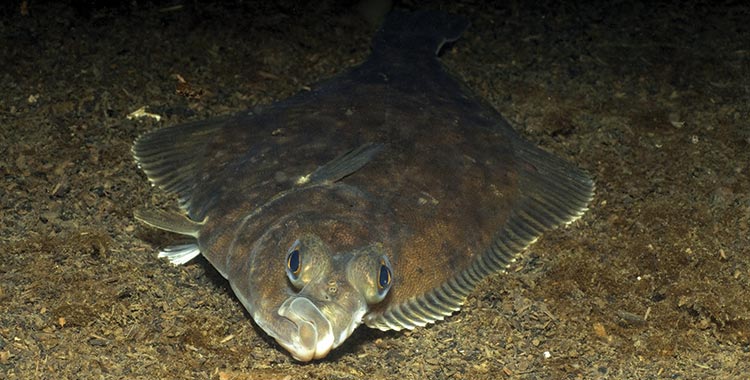 I was a kid once, something that’s difficult to remember during the 5 a.m. workdays, paying for car repairs and turning my friends down when they offer to start a movie after 8 p.m. But when the opportunity presented itself to go flounder gigging, a faint memory from my childhood stirred inside me. I remember riding in a grandparent’s golf cart as my friend drove around the adjacent empty lot in search of scattered leaves. These leaves were my prey; my weapon of choice a spear – a stick actually. Precariously perched off the side of the golf cart, I would jab my weapon into whatever batch of leaves I could find, pulling them up and counting my harvest. I have always had a taste for the outdoors and sense of adventure, and, as an adult, I turned to hunting and fishing. So when I was asked to go flounder gigging, I leapt at the chance. When I learned we’d be starting the trip at midnight, I died just a little, but my inner wild child prevailed over the humdrum adult, and I could hardly contain my enthusiasm in the days leading up to that night. 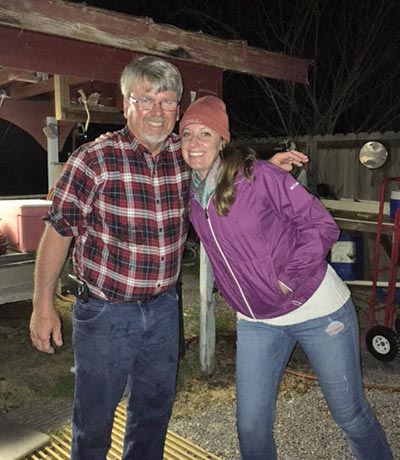 Armed with a two-hour nap, a Starbucks energy drink and a rain jacket, I set off for my midnight adventure. I mused about the days when my nights were just getting started at 10 p.m., now my preferred bedtime. Lack of sleep would be the last thing to dampen my spirits tonight, though. I was more than eager to prowl the shallow coastal waters and spend my time alive under the stars while others lay unconscious in their beds. I met Rainey at her childhood home, and she introduced me to our guide for the night – her dad, Herman Causey. They already had the boat ready to go, and we set off into the inky night.

When I met Herman, he pointed to a tall tree opposite his kitchen and said, “That’s my fishing tree.” I must have looked puzzled, as if I were wondering if you had to rub or hug the tree for luck. He continued: “You see that Spanish moss, how it’s hanging straight down? It’s going to be a good night.”

Maybe he knew how right he was. Herman has been patrolling the banks of the Wando River for 50 years with his friend Tony Hills. As a boy of 10, he stood armed on the bow of the boat, hoisting an 8-to-12-foot-long gig. The gig is similar to a trident in nature, a long lightweight pole with barbed prongs at the end. Spotlighting the fish in the dark, the gig is thrust into the unsuspecting flounder, bass or sheepshead. These predatory fish have gathered together in the shallows, lurking in wait as minnows drift overhead. Now we are the predators! Over the years, the numbers of fish have risen and fallen as more and more people realized the bounty of the water. Even still, Herman was kind enough to take me to his secret spots. While we rode out, he entertained me with stories of people he had fished with, from a Taiwan admiral to an old man sitting on the bank – people from all different backgrounds blessed with the opportunity to experience his knowledge and skill firsthand.

The wind was still and the water smooth as glass; I marveled at the number of fish I could see. Herman must have chuckled at my excitement over every mullet, sea turtle, stingray and, finally, something to spear – a red drum! Humbled after a swing and a miss, I watched as Herman almost immediately made up for my loss by gigging a flounder and deftly dropping him in the boat. Now we were in business, and I was going to make it count. He put me on the next one and I stuck him! Unaware what to do next, I froze with the fish still wriggling on the end of the gig. 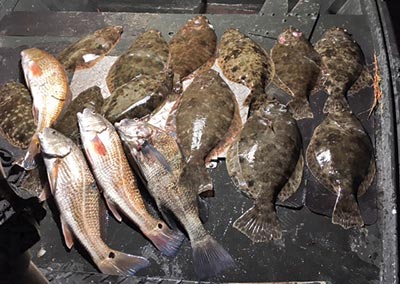 “Hit him like you mean it,” Herman exclaimed, and I dug a little deeper, then carefully lifted the flounder into the boat. I was elated! It was such a proud feeling to know that dinner would be on the table by my own hand – and the careful supervision of my guide.

After a few more rounds of “You’ve gotta get mad at these fish,” I decided to give it my best shot. Not realizing we were over a mud flat, I jabbed my next flounder so hard I buried him in 2-and-a-half feet of mud. More of the gig was in the water than out. Herman gracefully bailed me out once again by gently working the fish from the mire. Finally, like Goldilocks and her porridge, I was able to stick a flounder with the just right amount of force and in one elegant movement hoist him from the water and into the boat. The motion was so smooth and natural, I wondered why I hadn’t started this a long time ago. I turned the gig over to Rainey and cheered as I watched her gig her first flounder of the night. Excitement ruled every time they landed a fish. I watched as father and daughter worked in tandem as only they could.

With sore arms, heavy eyelids and 16 healthy fish in the boat, we decided to call it a night. Despite the time, nearly 2 a.m., there was a certain wakefulness that we relished as we cruised through the waters heading back to the dock. The quiet of the night accented by the hum of the motor lulled us into contentment, enjoying one another’s company and the success of our trip. This experience was a blending of generations, the chance for me to embody that childlike wonder of a new experience while observing a man true to his roots who had the years of practice to show me how it’s done.

Owner JD Cooper Talks Shop, Shutters and Staying Power What led to your success? I am a native Charlestonian and have always loved the water. At age 15 I became a commercial fisherman. As our town … END_OF_DOCUMENT_TOKEN_TO_BE_REPLACED

When Pitt Street Pharmacy took root in the 1940s in what is now Old Village in Mount Pleasant, it was one of many such pharmacies across the U.S. Now, it’s not only a rare original find; its … END_OF_DOCUMENT_TOKEN_TO_BE_REPLACED

Every little girl dreams of her wedding day — the elegant wedding cake with dozens of layers, the perfect venue decorated with gorgeous flowers and, most importantly, the show-stopping wedding dress … END_OF_DOCUMENT_TOKEN_TO_BE_REPLACED