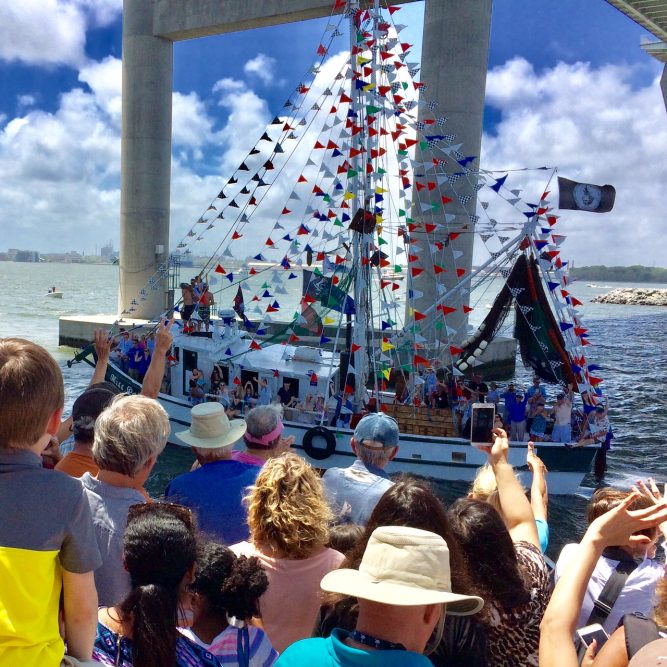 Every year since I can remember, the last Sunday in April has been blocked off on my calendar for the Blessing of the Fleet. My dad’s band has been a headliner in the shindig for nearly three decades, and I’ve grown up with a fond affection for the shrimp, good friends, sunshine and music that make Mount Pleasant so, well, pleasant. And celebrating our local shrimpers makes the event extra special – it’s a party with a very important purpose. The blessing is my kickoff to summertime and all the good things that go along with it.

In decades past, the Blessing’s fleet was at its peak with more than 30 boats, but, as the town has grown, the shrimp industry has done the opposite. Lower numbers of shrimp in the area and more money spent on gas, insurance and upkeep on the boats, combined with competition from cheap imported shrimp, has made the event more important than ever to help the fleet – once the lifeblood of this small town – stay afloat. This is my hometown, and for me, it’s a proud, goose bump-inducing moment to see those boats go by, flags aflutter, as blessings for a good harvest and safe return are bestowed upon each boat and crew as they cruise past.

Last April, I got an invite from the Tarvin family of Tarvin Seafood to join them on the Miss Paula and be part of the boat parade and blessing. I was nine months pregnant with my second child the same week, but there was no way I was going to miss the opportunity for this unique perspective of an event so close to my heart, so my husband and I eagerly climbed on board.

The sound of thousands of flags whipping in the wind was almost deafening on the clear blue day as we exited Shem Creek among the other 16 trawlers and idled toward the bridge. Crew, family and friends were toasting and waving to the other boats as we cut through the harbor together before posting up at the mouth of the Wando River while we waited for the signal to line up and parade by the Mount Pleasant Memorial Waterfront Park pier. 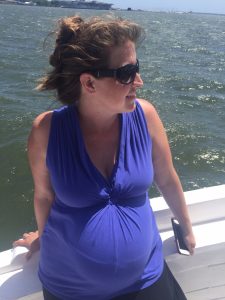 I found a perfect perch leaning against the bow of the Miss Paula where I could see it all – the crew, the revelers and the other boats as we floated among the fleet – hoping I didn’t go into labor right then and there and enjoying the opportunity to take it all in. It was pleasantly surprising to me how friendly all of these competitors were with each other, but, while they may be competitors when it comes to selling local shrimp, their white boots form a bond that most of us will never fully understand. Shrimping is far from being an easy business, and the crews face the same struggles and ultimately seek that same blessing for safety and a good harvest.

When we lined up and paraded past the pier, it was a proud moment for all of us as the Miss Paula was introduced and a prayer was said. There was cheering, the crew was jumping up and down and the boat was abuzz with merriment as they looked forward to the season ahead – kind of like midnight on New Year’s Eve all over again. The trip back to the dock was a bit more relaxed as we took in the views of the harbor, perhaps because the big moment had passed, or maybe it just seemed that way because I knew I had made it and wouldn’t have to give birth on a shrimp boat.

Looking back on the past year, times weren’t easy despite the blessing. Following a fairly good spring haul, the fall was one of the worst on record. As we look toward the 2018 season, when you’re on land at the 31st annual Blessing of the Fleet, watching the boats go by to receive their blessing, take an extra moment to consider the crew in their white boots and their families, and when times are good or when times are bad, buy local if you can. The boats may be fewer, but they are the reason for the celebration and part of what makes our town so special.

Story and photos by Anne Toole.

Blessing of the Fleet with Tracy Richter and Nicole Harvey

Owner JD Cooper Talks Shop, Shutters and Staying Power What led to your success? I am a native Charlestonian and have always loved the water. At age 15 I became a commercial fisherman. As our town … END_OF_DOCUMENT_TOKEN_TO_BE_REPLACED

When Pitt Street Pharmacy took root in the 1940s in what is now Old Village in Mount Pleasant, it was one of many such pharmacies across the U.S. Now, it’s not only a rare original find; its … END_OF_DOCUMENT_TOKEN_TO_BE_REPLACED

Every little girl dreams of her wedding day — the elegant wedding cake with dozens of layers, the perfect venue decorated with gorgeous flowers and, most importantly, the show-stopping wedding dress … END_OF_DOCUMENT_TOKEN_TO_BE_REPLACED