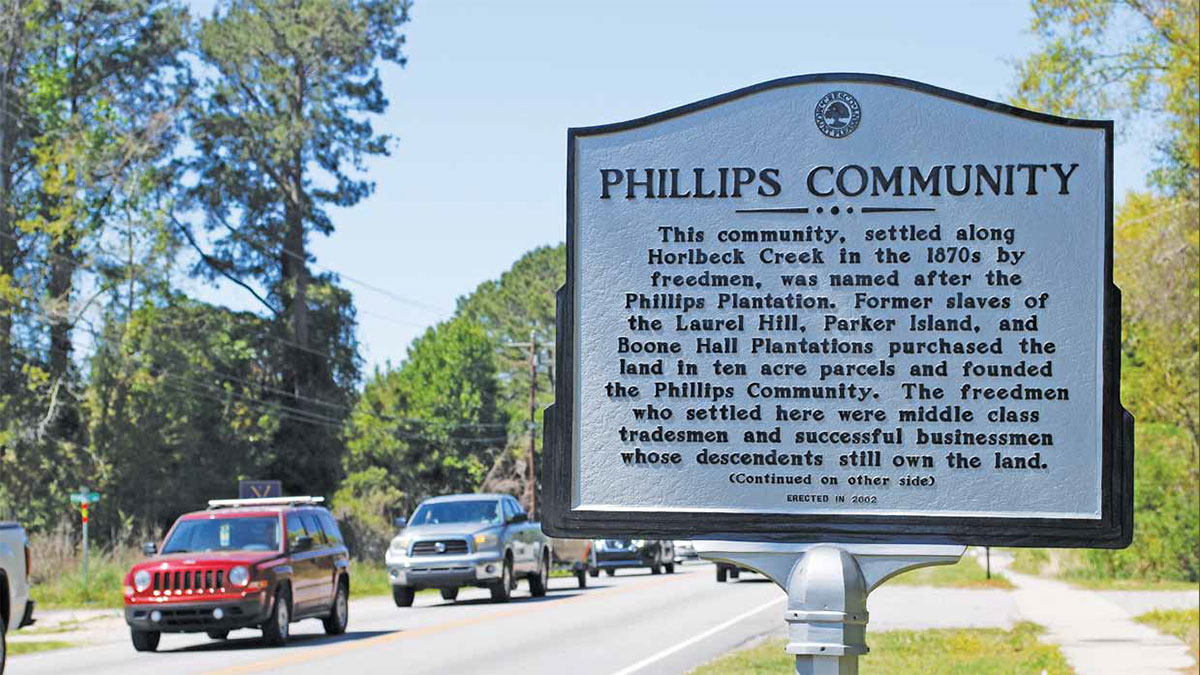 Richard Habersham’s family has been a fixture in the Phillips Community for nearly a century-and-a-half, when former slaves who had served their masters on at least three area plantations bought land along what is now Highway 41 and set out to make a life as free men and women. The 64-year-old has always lived on the land his ancestors purchased in the mid-1870s.

And he’s concerned that the community that has been his home for his entire life could become a victim of Mount Pleasant’s meteoric growth.

Habersham, who has served as president of the Phillips Community Association for the past 19 years, remembers when the area now bounded roughly by Park West, Horlbeck Creek, Joe Rouse Road and the Mount Pleasant Waterworks storage tank was a collection of small farms. Traffic was virtually nonexistent; few motorists could be found passing through on Highway 41.

That, of course, hasn’t been the case for quite some time. Residential communities have sprouted along the corridor in recent decades, including sprawling Park West, Dunes West, RiverTowne, Planter’s Pointe, The Colonnade, Brickyard Plantation and Horlbeck Creek. One lane each way simply isn’t enough to get all those people where they want to go in a reasonable amount of time. The town of Mount

Pleasant, Charleston County, the state of South Carolina and the federal government have developed a possible solution to the problem: adding two lanes to the road all the way from Highway 17 to the bridge over the Wando River in Berkeley County. That plan, according to Habersham, could be the death knell for the Phillips Community.

He pointed out that the width of a four-lane road would force at least 20 homeowners to find a new place to live, adding that the government probably would not give them fair value for their property.

“It would be more a hindrance and a hardship than anything else. It would destroy the community,” he stated, citing other black communities whose demise he said can be chalked up to growth in the Mount Pleasant area. “Look at 4 Mile. That’s gone. 7 Mile is gone. 8 Mile is gone.”

Habersham has a plan he thinks will help alleviate the traffic issue on Highway 41 and at the same time keep the community intact. He would like to see the project, which isn’t scheduled for completion until 2025, consist of one lane each way and a turn lane for approximately a mile north of Joe Rouse Road. He has no problem with a four-lane road north and south of the Phillips Community.

“If we had a center lane, traffic wouldn’t be held up when people are turning,” he said. “We want to be able to use the road without destroying the community. Four and five generations have lived there, and now people will have to get out. The community will be destroyed if the town and county don’t do what’s right.”

Phillips, around 550 acres of land at one time but now smaller, consists of around 300 houses and is home to roughly 750 people, according to John Wright, who heads the African-American Settlement Community Historical Commission, an organization launched in 2016 to “protect and preserve the existing characteristics of African-American Settlement Communities and enhance the quality of life for current and future generations of residents of the African-American settlement communities.” Wright, whose ancestors arrived in Phillips in the 1890s, said the group he leads is “100 percent with the community.”

“I have family that will be affected. We all have a stake in this,” Wright pointed out. “We will raise so much hell. I’ll stand in front of the bulldozers if I have to. We’re going to fight tooth and nail. If I have to go to jail, I’ll go to jail.”

It will be a while before Wright must decide whether to risk his safety by blocking construction equipment with his body. Work isn’t expected to begin until 2022. Under the National Environmental Policy Act, an extensive review must be completed before any dirt can be turned. Among the issues that will be studied is the effect the project will have on the people who live in the Phillips Community. Some of them are residents of Mount Pleasant, while others are located in unincorporated areas of Charleston County.

State Sen. Larry Grooms, who represents parts of Charleston and Berkeley counties and chairs the Senate Transportation Committee, encouraged members of the Phillips Community to work with Mount Pleasant and Charleston County to come up with the best possible plan for Highway 41. He said, however, that he doesn’t think the three-lane option will fly.

“I can’t see any scenario under which that would happen,” said Grooms. “From what I know of traffic counts, that project would fail from day one. The Federal Highway Administration will not cough up any money for it.”

Nevertheless, both Grooms and Mount Pleasant Mayor Will Haynie agreed that the project won’t be defined until the NEPA process is completed. Haynie said he would support “the most community-friendly design we can get that provides the capacity that actually makes it a true fix for the traffic volume.”

“The bottom line is that none of us have the final say in the design of the road,” he added. “The cultural and natural resources have to be evaluated in the NEPA process. It is my stated goal and the goal of the town to protect our cultural communities, whether it’s Scanlonville, 10 Mile or Phillips.”

Though Phillips is a mostly African-American community and, according to Habersham, 90 percent of its residents can trace their ancestry back to the post-Civil War era, he insisted that the final design of Highway 41 is not a black versus white issue.

“White families live in the Phillips Community, and they’re just as adamant as we are,” he said. “It’s not a racial thing. It’s a quality of life thing. This area fits the people who live here.”

Click, Listen, Watch & Learn. Doug Holmes, "The Stats Guy" crunches and studies statistics in many fashions including the MLS in Charleston talks with host and publisher Bill Macchio about the 2022 … END_OF_DOCUMENT_TOKEN_TO_BE_REPLACED

John Powell, CEO and President of the Southeastern Wildlife Exposition (SEWE) talks with host Brian Cleary about the expo's art show featuring local and regional artists, and Powell talks about other … END_OF_DOCUMENT_TOKEN_TO_BE_REPLACED

I’m sure you’ve heard the saying, “a picture is worth a thousand words” or “it takes a village.” Both of these popular expressions apply to the journey I recently embarked on, which culminated on … END_OF_DOCUMENT_TOKEN_TO_BE_REPLACED