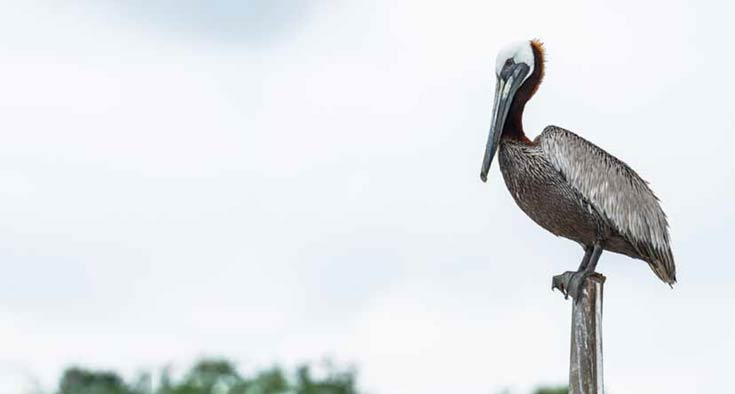 It’s summertime, and that means more time than ever on Mount Pleasant’s beloved Shem Creek. So when Perry the Pelican asked us if he could submit a feature about his experiences living on our iconic waterway, we said “of course.” Please enjoy the following essay, and remember to be kind to our feathered neighbors, no matter the time of year.
-The Editors

Pelicans don’t read, of course, or have newspapers. … but that doesn’t mean we don’t talk about what’s going on. And what we’ve been talking about on Shem Creek lately, more than ever, is the fact that we can’t spray a bill-full of water without hitting a human being. I tell ya, the foot traffic is getting thick these days in Charleston County, and Mount Pleasant is more popular than ever. I can’t blame these folks; I love living here, too. But, in the old days, we used to only encounter people on land. Now they are everywhere – swimming around and using these long, flat boats to get from one restaurant to the next.

Here’s a little bit of background about people versus pelicans: It isn’t always pretty. Look up the term “pelican” on Wikipedia, and you can see for yourself that pelicans and humans have always had a sort of rivalry. Why would a fabulous human like yourself – who can drive a snazzy car, make money and digest cheese efficiently – feel competitive with the likes of a shorebird, you ask? Simple: We catch more fish, and we honestly have better lives. Think about it this way. Remember that time you waited in a long line to get on a dinner cruise? Yeah, I flew right over your head. And then I took a well-timed dip in the cool water while you wiped your brow. And then I scored a French fry from a nearby dock while your blood sugar plummeted!

But take heart: I can’t really eat Skittles or book a hotel room with air conditioning. So my suggestion is that we accept and celebrate our differences, rather than trying to compete. A recent experience of my own, actually, made me feel that way. It all started when my youngest daughter, Pauline, wanted to do something special for her birthday. I tend to stay busy fishing for the family, so I decided I would spend the whole day with her. But when I asked Pauline what she wanted to do to celebrate (I’d been thinking maybe a flight around the various Charleston waterways) she replied that after watching so many humans travel Shem Creek on those long boat things I mentioned, she wanted to try it, too. 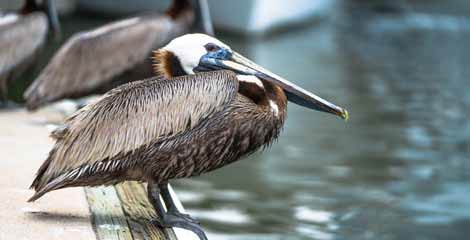 “But we can just float along without any kind of boat!” I told her, as if she didn’t know. “Why would you want to use what humans use?!”

So the day of her birthday, after she blew out a candle stuck in fish guts and made a wish, we headed to Coastal Expeditions to rent two of what we learned are called paddleboards. Pauline was flapping with excitement the whole time, and I was just amused at the clerk’s face. I suppose he’d never leased a board to a bird before!

Once we had our boards, we were off. I saw a bunch of humans getting onto their boards a little ways down the creek, so Pauline and I followed. As far as I was concerned, the whole thing was already a hassle. After all, without the boards, we’d just plop our feathered rear ends into the water. But we finally made it out there. I was shocked at how little room we had – everywhere I looked, I was surrounded by teenage girls in two-piece swimsuits, hipsters in sporty tank suits and tourists in pineapple print shorts.

“Scuse me,” I bellowed, but they didn’t speak pelican, of course, so they kept crowding me out. I caught a glimpse of Pauline, expecting her to be just as ruffled, but, to my amazement, she was smiling.

“This is fun!” she declared. “Aren’t you having fun, Daddy?”

I furrowed my feathered brow.

“Fun? I can hardly move. The creek is small, and it’s so thick with paddleboards that it’s pointless. We’re more on a sea of fiberglass than water!”

“Oh, Dad,” Pauline sighed. “The point isn’t to move; we do that on our own. The point is to see how humans live! Look how happy they all are. It makes me happy to see them!”

She gestured with her wing. I looked. She was right. Everyone was laughing, sipping from soda cans, shouting to their neighbors and talking about the beautiful day. I pretty much came across as a grouch.

I figured that if this was the bar for fun that humans were trying to reach, we had them completely beat. On the other hand, I had never tasted a soda. Nor had I befriended the neighbors; all they did was steal my fish.

At the end of the day, Pauline and I turned in our boards. We’d gone next to no distance – the shortest trek I’d made in my entire bird life – and we were somehow still tired. I guess it was all that maneuvering.

“You know,” Pauline mused later over dinner. “I think these humans want a taste of freedom, like what we have and take for granted. I think that’s what they are after, using these paddleboards. It gets them away from the road and whatever else bothers them.”

I dabbed a little bit of hot sauce on my shrimp and gulped it down.

The next morning, I decided to write the essay you’re holding in your hands now. I wanted everyone who reads Mount Pleasant Magazine to understand that, yes, even we birds get that “grass is greener” syndrome once in a while. However, it’s important not to take your lifestyle for granted. In other words, while you, dear human reader, might have candy and air conditioning, I’d rather live my life as bird.

It’s nice from up here.

Click, Listen, Watch & Learn. Doug Holmes, "The Stats Guy" crunches and studies statistics in many fashions including the MLS in Charleston talks with host and publisher Bill Macchio about the 2022 … END_OF_DOCUMENT_TOKEN_TO_BE_REPLACED

John Powell, CEO and President of the Southeastern Wildlife Exposition (SEWE) talks with host Brian Cleary about the expo's art show featuring local and regional artists, and Powell talks about other … END_OF_DOCUMENT_TOKEN_TO_BE_REPLACED

I’m sure you’ve heard the saying, “a picture is worth a thousand words” or “it takes a village.” Both of these popular expressions apply to the journey I recently embarked on, which culminated on … END_OF_DOCUMENT_TOKEN_TO_BE_REPLACED