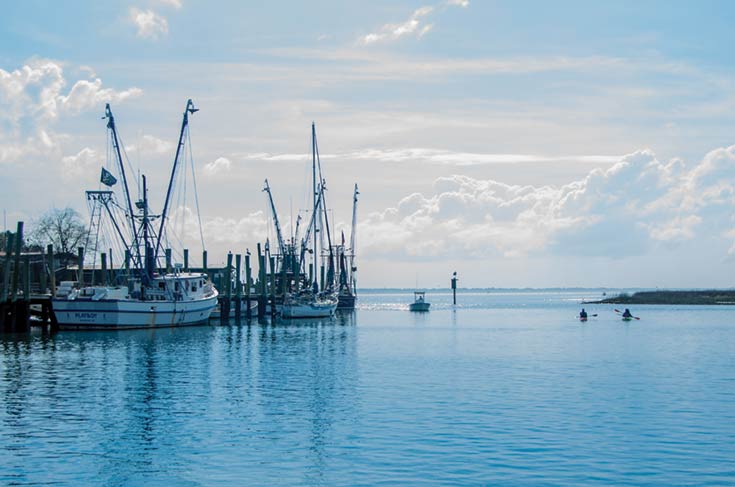 Students of late 18th century English literature will recognize this quote from “The Rime of the Ancient Mariner,” though if Samuel Taylor Coleridge were alive today, he might be saying the same thing about Mount Pleasant’s most beloved waterway. After a good rain, Shem Creek isn’t safe for paddleboarding, much less drinking, according to Andrew Wunderley of Charleston Waterkeeper, a 10-year-old organization whose mission is “to protect, promote and restore the quality of Charleston’s waterways while ensuring the public’s right to swimmable, drinkable, fishable water.”

That’s the bad news. The good news is that through the efforts of the town of Mount Pleasant, Waterkeeper and Mount Pleasant Waterworks, Shem Creek’s future looks brighter than its past. At its March meeting, the Town Council was scheduled to consider an ordinance banning single-use plastic bags and foam containers, and the town and Waterworks are targeting another major polluter by offering financial incentives for local residents still using septic tanks to tie into the municipal sewer system.

Meanwhile, the town’s Stormwater Division is doing its best to keep rain from washing trash, oil, grease, leaves and, yes, dog poop, into Shem Creek’s vast watershed and ending up in the creek.

“The quality of the water in Shem Creek is not the best,” said Mount Pleasant Town Councilman Jim Owens, who wrote the original draft of the Environmentally Acceptable Packaging Products Ordinance, which went to the Council’s Economic Development Committee and Police, Legal & Judicial Committee in February. “We’re going to clean it up as much as we can.”

Mount Pleasant’s efforts to keep foam and plastics from polluting Shem Creek could be stymied by the state of South Carolina. In February, the House passed a bill that would prevent local governments from banning these items.

According to Wunderley, plastic pollution is a major problem in Shem Creek and throughout the Lowcountry. He pointed out that the five most common polluters are plastic bottles, bottle caps, Styrofoam, food wrappers and plastic bags. He said these materials break down into tiny microplastics within four to six weeks and in many cases are consumed by fish, shrimp, turtles and birds.

As dangerous as plastics are for the environment, Wunderley pointed out that rainfall is even more harmful to the quality of the water in Shem Creek because it washes oil, grease, brake dust, fertilizer, pesticides and leakage from septic tanks into the creek.

“We’ve changed the way land and water interact by developing land around the creek,” he pointed out. “In a natural watershed, the rain soaks into the ground – not so with all the development around Shem Creek.”

Waterkeeper and its more than 1,500 volunteers are doing their part to improve the quality of the Lowcountry’s waterways by regularly testing the water in Shem Creek and elsewhere; collecting oyster shells and using them to build reefs; collecting debris from waterways and marshes; and pumping the waste out of bathrooms in boats that might otherwise end up being discharged into rivers or creeks.

“Our goal is to make it 100-percent safe to swim in Shem Creek,” Wunderley commented.

The town of Mount Pleasant is attacking the stormwater issue with a six-part plan based on public education and involvement; finding and eliminating sources of pollution; inspecting construction sites and the ponds created to capture harmful runoff; and making sure the town itself is adhering to water quality standards.

“I’m particularly proud of the public involvement in Mount Pleasant,” said Charlie Hansen, the town’s NPDES (National Pollutant Discharge Elimination System) coordinator. “We have equipment available for anyone in the town to do a cleanup. We recently had a group pick up cigarette butts and plastic, and a local church cleaned up Waterfront Park.”

Hansen said Mount Pleasant’s Stormwater Division regularly inspects all the pipes that discharge runoff from rain into the marsh and Shem Creek, adding that the town hired a consultant last year to look at the water quality in the creek. Samples were taken at 10 locations, and the study found that dog feces were indeed an issue.

“That’s probably from homeowners not picking up dog waste, and, when it rains, it washes into the creek,” said Hansen. “It’s a community effort. If we all help out a little and pick up our pet waste, we can help protect Shem Creek.”

In addition, according to Hansen, the town has at least 38 manufactured treatment devices that collect debris that would have been carried by stormwater into the marshes and the creek. They are emptied of trash, dirt, sediment, leaves, grass and other unsavory items at least once a year. Another MTD is being built on Simmons Street as part of the drainage improvement project currently underway on Coleman Boulevard.

The Stormwater Division also is responsible for inspecting 153 current construction sites in Mount Pleasant to make certain builders are in compliance with their South Carolina Department of Health and Environmental Control NPDES construction permit.

“We have two NPDES field inspectors that are required to visit every active construction site in the town monthly and generate reports and potential enforcement if the site is out of compliance,” Hansen said.

He added that Public Service Department crews regularly vacuum out every storm drain around Shem Creek and eventually will be providing the same service to all storm drains in the town.

“One pipe can take 10 minutes to an hour,” he said. “Those trucks never stop running.”

Owens pointed out that Shem Creek was “extremely polluted” in the 1950s and 1960s, in part because the town had no way to treat sewage. It was discharged directly into the harbor, along with stormwater, according to Mount Pleasant Waterworks General Manager Clay Duffie. At that time, most Mount Pleasant residents had septic tanks.

The town’s first treatment plant was built in 1969. Today, Duffie said, there are 153 septic tanks in the Shem Creek watershed, and they are all subject to leaking into the creek. Forty-three of those homeowners are currently able to tie into the town’s sewer system, while 73 would require a line extension. Duffie pointed out that the remaining 37 are in Charleston County. If they are contiguous to Mount Pleasant, they would have to be annexed to be able to tie in.

Duffie said it would have cost each homeowner around $5,000 to hook up to the sewer system, but Mount Pleasant will cover around half that expense from the 1 percent of its revenue Waterworks gives the town. He added that an ordinance requires homeowners to tie into the sewer system if they can.

“At this point, we want to enforce that ordinance to make a dent in improving the water quality in Shem Creek,” Duffie said.

Hansen said the success of the effort to improve the water quality in Shem Creek will depend on more than just the town, Waterworks and Waterkeeper.

“In the past 11 months I’ve been with the town, the public and everybody around has shown they have a shared interest and a shared love for Shem Creek,” he commented. “I’m excited that people want to be part of the solution. We can all come together as a town and improve the water quality in Shem Creek.”

Owner JD Cooper Talks Shop, Shutters and Staying Power What led to your success? I am a native Charlestonian and have always loved the water. At age 15 I became a commercial fisherman. As our town … END_OF_DOCUMENT_TOKEN_TO_BE_REPLACED

When Pitt Street Pharmacy took root in the 1940s in what is now Old Village in Mount Pleasant, it was one of many such pharmacies across the U.S. Now, it’s not only a rare original find; its … END_OF_DOCUMENT_TOKEN_TO_BE_REPLACED

Every little girl dreams of her wedding day — the elegant wedding cake with dozens of layers, the perfect venue decorated with gorgeous flowers and, most importantly, the show-stopping wedding dress … END_OF_DOCUMENT_TOKEN_TO_BE_REPLACED