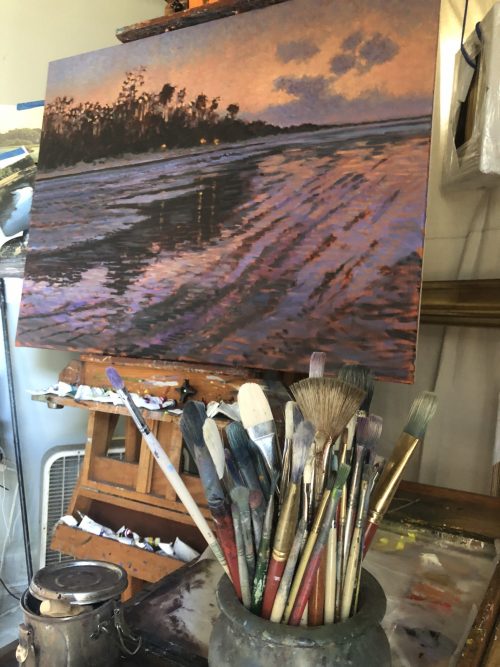 “Life imitates art far more than art imitates life,” or so poet Oscar Wilde opined in 1894. And the debate as to which is more imitable continues yet. But as far as one Mount Pleasant artist is concerned, the answer is simple: Art is life.

It only takes a glance to realize that the works of Michael Gray, who is well-known in the Charleston area for his colorful coastal landscapes, are not just masterpieces of the hand but also expressions from the heart, manifestations of the very soul of the South Carolina Lowcountry.

Gray’s works fall into the style known as impressionism, born of an experiment undertaken in the summer of 1869 by two struggling young artists, Claude Monet and Pierre-Auguste Renoir, who attempted to capture the lively atmosphere around a small pond outside of Paris by painting the same outdoors scene simultaneously. This style, which sought to capture the transitory nature of light as it fell upon the water and its glimmer as it reflected off the faces of people along the bank, seemed absurd to some at the time, but today impressionism is the most popular style of painting.

Gray got his own start a century later when, in the summer of 1969, a 10-year old lad, sketch pad and pencils in hand, set out across tobacco fields near his rural Marlboro County home in search of a suitable tobacco barn to draw. He found a barn that day – and his passion.

And after years spent studying under such noted artists as Ilona Royce Smithkin and accumulating knowledge in the classrooms and museums of the world’s most-renowned art institutes, Gray followed his heart to return full-circle and paint what he knew best and loved most: his beloved South Carolina coastline.

“I have a passion for paintin 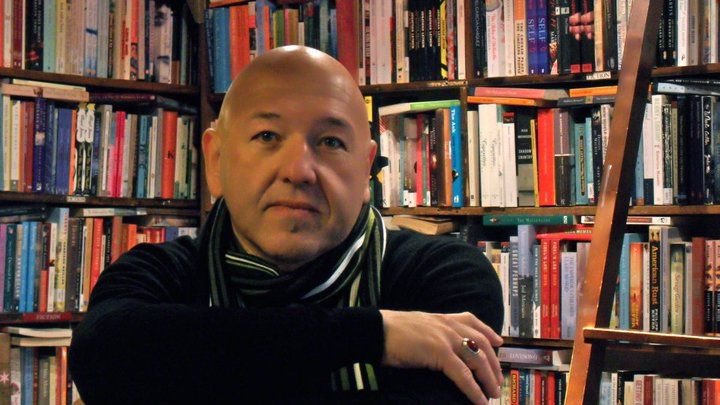 g,” Gray pointed out, “but, more importantly, I have a passion for the environments I paint.”

Back home, Gray found not only fading architectural icons of the Old South but also a landscape full of richness, texture, color and variety that rivaled the beauty of any place he had ever traveled. And for the last 35 years, he has primarily dedicated himself to painting the incomparable South Carolina coastline, from Little River to Hilton Head, with very little in between left unexplored.

And very few people unmoved. To see a Michael Gray painting of the South Carolina Lowcountry is to see a composition made of thousands of dots, dashes and brushstrokes.

“I seek to build a painting in a method so similar to those artists of 100 years ago that they would recognize my technique and result as true impressionism,” he said. “Color is my best friend and allows me to manipulate a multitude of variations in relationship to color harmonies and the effect of ever-changing light and helps me to capture the ever-changing beauty of our coastal landscapes.”

When he’s not in the studio, Gray travels throughout the world lecturing on the act of creativity and aesthetics or judging; he also visits Paris and London annually and spends a month every spring in the Tuscan hills near Florence, Italy. 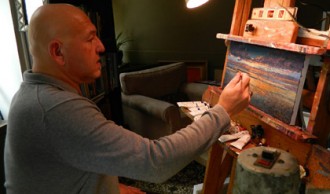 Gray’s work is held in public, private and institutional collections throughout the world, and he is highly sought-after for commission work, especially for his ability to adapt a work of art to a pre-existing space, which makes him a favorite among architects and designers. Gray’s most recent high-profile project was creating a coastal landscape piece for the Office of the Governor and the South Carolina Commerce Department, which was then replicated and presented as a gratitude gift to the head of international corporations who initiated new business in the Palmetto State in 2017.

Gray is nothing if not grateful for the opportunities his art has made possible.

“To go from the pine forests and tobacco fields of my youth to being chosen as the artist to represent my state and welcoming others to the power, grace and beauty of South Carolina has been a humbling journey that has been the greatest honor of my life,” he said.

Gray maintains a studio and office at Darrell Creek in Mount Pleasant. He is represented exclusively in South Carolina by the I. Pinckney Simons Gallery of Beaufort and worldwide by the Wolf Fine Art Gallery of Los Angeles. Visit his website at www.studiomichaelgray.com.

Owner JD Cooper Talks Shop, Shutters and Staying Power What led to your success? I am a native Charlestonian and have always loved the water. At age 15 I became a commercial fisherman. As our town … END_OF_DOCUMENT_TOKEN_TO_BE_REPLACED

When Pitt Street Pharmacy took root in the 1940s in what is now Old Village in Mount Pleasant, it was one of many such pharmacies across the U.S. Now, it’s not only a rare original find; its … END_OF_DOCUMENT_TOKEN_TO_BE_REPLACED

Every little girl dreams of her wedding day — the elegant wedding cake with dozens of layers, the perfect venue decorated with gorgeous flowers and, most importantly, the show-stopping wedding dress … END_OF_DOCUMENT_TOKEN_TO_BE_REPLACED