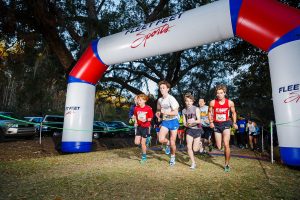 With exceptional recreation facilities, popular walking trails and predominantly mild weather, Charleston has become a haven for those who love the sport of running. Some run for fun, exercise or to de-stress. Others run to compete, and there is no shortage of local road races offered to enthusiasts from all walks of life. One group of runners often stands out more than the rest. Many can’t legally drive and still have homework most nights, but these young competitors are making a huge splash on the local running scene.

Mount Pleasant resident Marshall Hodges regularly competes in many of the local 5K and 10K events, including the Cooper River Bridge Run, the largest running event in South Carolina and the third largest in the country. Running since he was in the fourth grade, Hodges is now a freshman at Academic Magnet and a member of the school track team.

“I really enjoy being on the team and representing the school,” Hodges said. “Competing in local road races is a lot of fun, and I love being part of them.”

Hodges got his first experience with running when he joined the Mount Pleasant Track Club in 2013. Participating in cross country in the fall and track and field in the spring and summer, he gained enormous experience competing and is now a regular in many local running events.

His father, Burt Hodges, said he and Marshall often compete together, running as a team in a few road races, including the Peyton Wild and Wacky 10x5K held each year since 2015.

“We ran as a two-man team last year and won,” he said. “It’s an activity we can do together, and we really enjoy the camaraderie of the local running community.”

Zane Jackson, a sophomore at Palmetto Scholars Academy, has become a force to reckon with at any race in which he competes. Running for his school and MPTC, he has become known for his incredible speed and endurance, which have catapulted him to record-breaking success each season. Competing in the Bridge Run last year, Jackson placed in the top 50 overall out of almost 40,000 runners. He is also the first MPTC team member to claim four All-American titles in four different events in one track season. Jackson regularly participates in many local races and is recognized as a tough competitor.

“The first 5K I did, I didn’t do too well,” Jackson said. “But I kept challenging myself and got faster, and now I love competing in as many races as I can.”

Tami Dennis, head coach of the MPTC, said she loves seeing the kids challenge themselves by entering local races.

“While it depends on where we’re at in the season, if they can compete in other races, I think it’s a great boost to their confidence if they’re able to run in these events,” she said. “When they perform well in a highly-contested, very competitive local race like the Bridge Run, it’s wonderful. It’s a great experience and great visibility for themselves.”

Another local young runner moved to Mount Pleasant when he was 9 years old and immediately joined the MPTC cross country team. Now a senior at Wando High School, Patrick Spychalski has been running for almost 10 years.

“I was an average runner at first but started to improve and continued to rank higher,” he said.

As a member of Wando’s track team as well, he has earned multiple titles and awards over the years.

Regularly competing in local races, Spychalski has participated in the Cooper River Bridge Run, Turkey Day Run, Reindeer Run and numerous others. While many races are arranged by age group, he has not only received top honors in his demographic but overall as well. In the 2017 Reindeer Run, he ranked fourth out of about 3,500 participants and was top 10 in the Turkey Day Run, beating more than 8,000 runners last year. 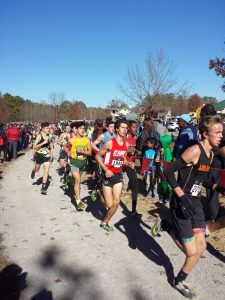 “Whenever I hear about any local road races, if I don’t have a school track meet, I sign up,” he said. “I really enjoy the people and atmosphere of these events. It’s a sport that’s very individually competitive, but it’s also a team sport. People are also very gracious and show great sportsmanship.”

Spychalski has committed to run for Villanova University in Philadelphia and will be heading to school in the fall.

“It’s a great school and we have family there, so I’m really looking forward to it,” he said.

Chuck Magera, owner of Charlestowne Road Race Services since 1980, said he handles the timing for about 100 races each year and sees many of the same kids competing in multiple events.

“I do races all over the state and see a lot of familiar faces,” he said. “Many of these local runs have such a huge following, and I’ve seen some phenomenal young runners.”

Magera said many of the younger participants have set national records and are often outrunning even the more experienced adult athletes.

“While there’s a greater variety of sports available for kids these days and they have so much technology to distract them, I still see a lot of young runners getting into this sport and becoming tough competitors,” he pointed out.

Dennis agreed and has not only seen tremendous growth in the MPTC membership over the last few years but a significant increase in young competitors at local events.

“What I see more and more of is that kids are the driving force of getting into these road races. It used to be the parents asking about it and signing them up, but it’s flipped,” she said. “Now the kids are motivated to get the parents more involved. It’s an interesting twist on how the sport has grown.”

Rebecca Imholz, Director of the Mount Pleasant Chamber of Commerce talks with host Brian Cleary about the 2nd Annual Dine Where You Live Campaign which is a proactive reaction by Mount Pleasant to … END_OF_DOCUMENT_TOKEN_TO_BE_REPLACED

For many of us, April 18 represents a looming and ominous deadline — Tax Day. Be it dread of the unknown, anxiety over how to navigate a complicated process, panic about penalties or stress about the … END_OF_DOCUMENT_TOKEN_TO_BE_REPLACED

Retiring from the fourth largest municipality in .the state of South Carolina after nearly 24 years of heading the Town of Mount Pleasant’s communications office is a momentous occasion for me. … END_OF_DOCUMENT_TOKEN_TO_BE_REPLACED