“Differences of opinion are not a bad thing.” 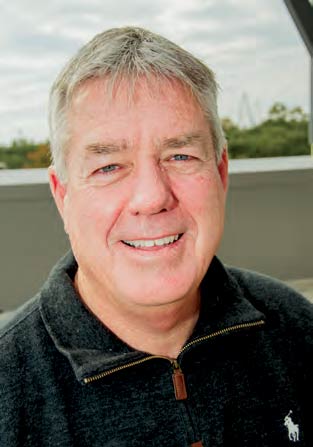 A day after graduating from Slippery Rock University in Pennsylvania, 21-year-old Tom O’Rourke arrived in the Lowcountry and took a job with East Cooper School. The private institution of learning eventually faded into history, leaving behind a group of buildings that served as Mount Pleasant’s Town Hall until 2017.

Forty years later, O’Rourke launched his first-ever political campaign and earned a spot on the Mount Pleasant Town Council, which meets in the new Town Hall, just a stone’s throw from where he served the long-gone school as coach and athletic director.

“I understand government, politics and government finance,” said O’Rourke, explaining why he sought a seat on the Council. “Everything is about money. How do you pay for things?”

After an eight-year stint at East Cooper School, O’Rourke honed his skills in the government arena as recreation director for the town of Mount Pleasant. He also worked for Seamon Whiteside, in the insurance business and as director of Charleston County Parks. He is still with the ParkLands Foundation, teaches at Clemson and is director of the week-long National School of Directors of Parks and Recreation in West Virginia.

O’Rourke dipped his toe into the chaotic waters of politics, even though he realized that he was never going to be able to make everyone happy.

“It’s a hard, thankless job. In this day and age, with media everywhere, if you blink the wrong way – or the right way – you offend some people. I’m not going to try to please everyone. You just do what you think is best for the town and move forward.”

He said he wasn’t surprised to see three new councilmen and a first-time mayor elected in November 2017.

“If you’re in office eight or 12 years, everyone is going to hate you,” he added. “It’s not a bad idea to rotate in new people.”

O’Rourke said he thinks most people in Mount Pleasant are concerned with controlling the growth of the town, a major issue the past two elections. He said the best option would be to try and figure out what the town will look like in 20 or 30 years, then build the infrastructure – roads, schools, drainage, water, recreation – that will support the number of people who will live in Mount Pleasant two or three decades from now.

“We need to build toward a vision. We sure need to know what is the vision we’re trying to get to,” he said.

And where is that money coming from? O’Rourke suggested that community events such as concerts and festivals could make a difference for the town financially.

“A marathon could bring in $200,000,” he said. “I’m not saying that’s going to happen, but getting into the event business can generate money.”

According to O’Rourke, the best thing about his adopted hometown of Mount Pleasant is that “it’s a safe place because of the work of the Police Department.”

And how does he see his role on the Council?

“I want to bring a calm, professional voice to the Council. I’m OK with disagreement. It gives you a better result. Differences of opinion are not a bad thing.”

Rebecca Imholz, Director of the Mount Pleasant Chamber of Commerce talks with host Brian Cleary about the 2nd Annual Dine Where You Live Campaign which is a proactive reaction by Mount Pleasant to … END_OF_DOCUMENT_TOKEN_TO_BE_REPLACED

For many of us, April 18 represents a looming and ominous deadline — Tax Day. Be it dread of the unknown, anxiety over how to navigate a complicated process, panic about penalties or stress about the … END_OF_DOCUMENT_TOKEN_TO_BE_REPLACED

Retiring from the fourth largest municipality in .the state of South Carolina after nearly 24 years of heading the Town of Mount Pleasant’s communications office is a momentous occasion for me. … END_OF_DOCUMENT_TOKEN_TO_BE_REPLACED