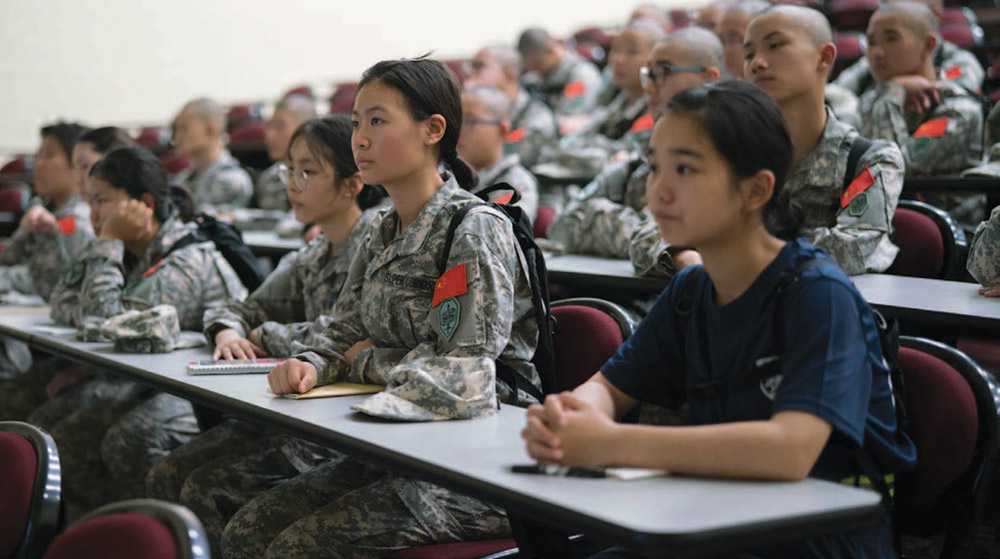 Once a year, 100 or so teenagers from affluent families in China gather on the hallowed grounds of New York Military Academy, located beneath Storm King Mountain in the heart of the Hudson Valley. For three grueling weeks, they live a Spartan existence, learning how to fight, to survive and to lead, and doing it all without the distraction of cellphones, computers or electronics of any kind.

The Super Commander International program is the brainchild of Aric Southworth and Jiaxin Qu. Southworth, a retired U.S. Air Force lieutenant colonel and a Mount Pleasant resident since 1994, was teaching at The Citadel, where Qu, whose parents own textile factories in China and Korea, was a cadet. In 2015, they combined their talent, vision and entrepreneurial spirit to found SC International, a thriving business that already has taken a giant step toward mutual understanding between two conflicting cultures.

“In my military career, we tended to view China as an adversary,” Southworth said. “This is an international program that provides insight into both cultures. I believe it benefits both countries because the more we know about each other, the less likely we are to have conflicts.”

Gen. James Livingston, a retired Marine who lives in Mount Pleasant, certainly knows more than most about leadership. A Medal of Honor recipient, he was the keynote speaker at the opening ceremonies for SC International’s third annual training session, which ran from July 13 to Aug. 2 this year.

Southworth said Super Commander participants range in age from 15 to 22, adding that around 15 percent of them are young women. For the most part, they are the children of wealthy Chinese businessmen. They live in the barracks at New York Military Academy, and, in addition to intense physical training, they learn about drown-proofing and survival swimming, marksmanship, hand-to-hand combatives and conflict avoidance. Honor, integrity and East vs. West perspectives are important aspects of their

extensive classroom training. Most of all, they learn how to lead.

In addition to Southworth and Qu, Brent Varitz, an Oregon native who is also a retired Air Force lieutenant colonel and now a Mount Pleasant resident, is a key member of the instruction team. Southworth pointed out that five of the most motivated cadets in this year’s group joined the training team, which left for China following the session in New York. There, the team traveled around the country, holding boot-camp-style leadership training for corporate executives. In four to-seven-day sessions, Southworth, Qu, American college students and Chinese high schoolers put 35- to 50-year-olds through a program similar to the training provided at New York Military Academy.

In the beginning, Southworth, who also is sales director at Dunhill Staffing Systems in Mount Pleasant, wasn’t sure his entrepreneurial idea would work. Three years after he and Qu convinced a group of wealthy Chinese businessmen that he could make leaders out of their somewhat self-indulged children, it appears that they have discovered an idea that, combined with a recipe of hard work and dedication, has produced a winning business model.

“Qu and I went out on a limb to found this company,” Southworth said.

“They’re dealing with kids from affluent families. It’s amazing. It’s like Parris Island,” Livingston pointed out. “They’re very attentive and alert. It shows you what discipline will do for a kid. Their parents recognized their kids’ failures, and they were reaching out for help.”

The Medal of Honor recipient stressed that the program emphasizes how to be disciplined, organized and focused, “things that sometimes are missing in our society.”

“They need to overcome their weaknesses and set themselves up for a better life by having a better understanding of what they need to do to prepare themselves to be adults,” he told the cadets at the opening ceremonies. “It’s what leadership is all about. They really have to learn to lead by example.”

Southworth now spends about three months out of the year in China, training and recruiting people into the program. He said his company offers a corporate training program in China every other month, though he doesn’t attend every session. He pointed out that discussions are underway about expanding SC International to Australia, and he also hopes to increase the program in New York to 200 to 250 cadets. The 47-year-old East Cooper resident would also like to offer the training to American teenagers.

“American kids shoulder to shoulder with Chinese kids in a challenging learning environment. That’s motivating to me,” he commented. “I think it will be very helpful for future generations by having Americans involved in the course,” Livingston added. “They can look at parallels and similarities and understand how we approach things. It will make them more appreciative of our country.”

For many of us, April 18 represents a looming and ominous deadline — Tax Day. Be it dread of the unknown, anxiety over how to navigate a complicated process, panic about penalties or stress about the … END_OF_DOCUMENT_TOKEN_TO_BE_REPLACED

Retiring from the fourth largest municipality in .the state of South Carolina after nearly 24 years of heading the Town of Mount Pleasant’s communications office is a momentous occasion for me. … END_OF_DOCUMENT_TOKEN_TO_BE_REPLACED

Perhaps you’ve noticed it as you’ve turned off Highway 17 onto Mathis Ferry Road, just past the first traffic circle. More likely than not, you haven’t paid it much attention. But that’s about to … END_OF_DOCUMENT_TOKEN_TO_BE_REPLACED