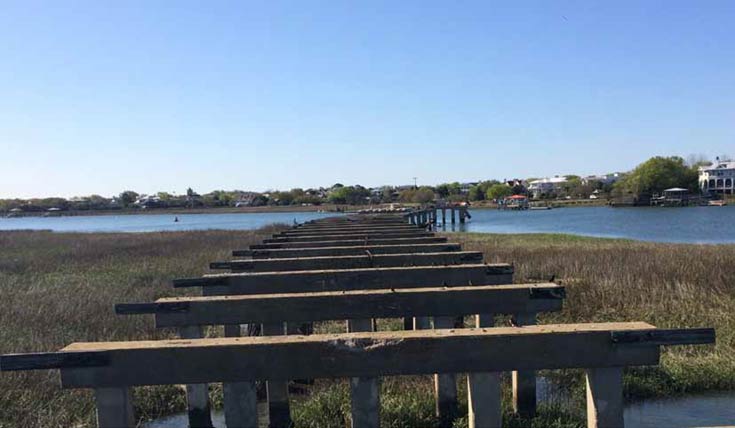 The narrow strip of land that extends into the marsh at the end of Pitt Street in the Old Village of Mount Pleasant provides breathtaking views of the beauty of the Lowcountry and gives locals and visitors the opportunity to engage in a variety of outdoor activities, from walking and running to fishing and bird-watching.

But beyond its current use as a recreation destination, the area known as the Pitt Street Bridge is a vital connection to the past with a history that spans generations. From the Revolutionary War to the Civil War to the Roaring ’20s, the Pitt Street Bridge – also called the Cove Inlet Bridge and the Cove Inlet Causeway – was once the only land-based route for people to get from Mount Pleasant to Sullivan’s Island and Isle of Palms.

When Revolutionary War historian Benson John Lossing visited Sullivan’s Island in 1849, he wrote, “On the northwestern side of the island are the remains of an old causeway or bridge, extending to the main, nearly upon the site of a bridge of boats, which was used during the battle in 1776. It was constructed after that conflict, at the cost of Christopher Gadsden, and was called Gadsden’s Bridge.”

Suzannah Smith Miles, an author and respected Lowcountry historian, described Gadsden as a great patriot who was also well-known as the designer of the “Don’t Tread On Me” flag.

Building this nearly mile long bridge across the marsh and through the pluff mud was no easy task, and it took nine months, according to Miles.

“But on June 7, 1777, almost a year after the Battle of Fort Sullivan, the bridge was finished,” Miles wrote. 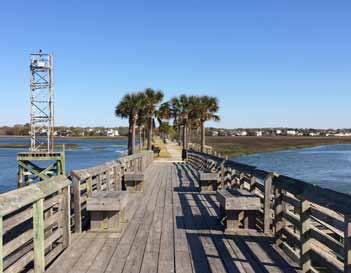 By the time of the Civil War, the bridge had been rebuilt. In 1864, the crew of the H.L.Hunley was staying in Mount Pleasant and used the footbridge to reach Breach Inlet, where the Confederate submarine was stored. The crew often crossed onto Sullivan’s Island at night to run test dives.

As Charleston was slowly rebuilding after the Civil War, “Long Island” was sold in 1897 to a group of investors that included Dr. Joseph S. Lawrence.

“Through Lawrence’s energy and brilliance, the former wilderness island was transformed and renamed Isle of Palms,” Miles wrote.

His vision to bring visitors to a new resort on the Isle of Palms included a ferry that would transport people from Charleston to Ferry Street in Mount Pleasant – near today’s Alhambra Hall. They then would take a trolley over the Pitt Street Bridge, across Sullivan’s Island and onto Isle of Palms. This meant building the first bridge over Breach Inlet, no small feat considering the inlet’s strong currents.

Miles remarked that, amazingly, everything was built in less than one year and opened in 1898.

“From the grand opening onward, literally thousands of people flocked to Isle of Palms each day, so much so that within a week after the resort’s grand opening, the ferry and trolley lines 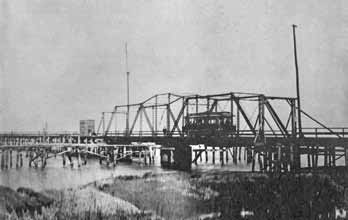 had to increase the number of trips on their schedules,” Miles wrote.

The electric trolleys were luxurious, made with mahogany and leather seats. Today, the streets along Sullivan’s Island are named for the trolley stations.

The trolley bridge spanned Cove Inlet from 1898 until 1927. In 1923, the wooden bridge was widened to allow enough room for cars. In 1927, the trolley was replaced by a vehicle bridge known as Pitt Street Bridge.

When the Ben Sawyer Bridge opened in 1945, the Pitt Street Bridge closed. In 1950, Charleston County deeded the bridge to the town of Mount Pleasant, and it was converted into a fishing pier. Although most of the old bridge burned in a fire, a section remains intact, and visitors who walk to the end of the promenade can still see the pilings lined up across the water. 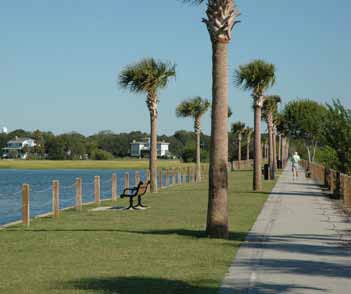 Today, a marker officially designates the spot as Pickett Bridge Recreation Area. The sign reads: “Dedicated in honor of Dr. Otis M. Pickett and Mrs. Ruth Pickett in recognition of their lifetime of service to the citizens of Mount Pleasant, South Carolina.”

Dr. Otis Pickett and his wife, Ruth, had been childhood sweethearts since 1936 when they got married in 1944. The doctor walked from his home on Sullivan’s Island, over the Pitt Street Bridge, to his office located next door to the Pitt Street Pharmacy. Ruth worked alongside her husband at the doctor’s office for 40 years.

With historical significance that spans more than 200 years, hopefully its role as a public park will ensure that this spot can be enjoyed for generations to come.

Owner JD Cooper Talks Shop, Shutters and Staying Power What led to your success? I am a native Charlestonian and have always loved the water. At age 15 I became a commercial fisherman. As our town … END_OF_DOCUMENT_TOKEN_TO_BE_REPLACED

When Pitt Street Pharmacy took root in the 1940s in what is now Old Village in Mount Pleasant, it was one of many such pharmacies across the U.S. Now, it’s not only a rare original find; its … END_OF_DOCUMENT_TOKEN_TO_BE_REPLACED

Every little girl dreams of her wedding day — the elegant wedding cake with dozens of layers, the perfect venue decorated with gorgeous flowers and, most importantly, the show-stopping wedding dress … END_OF_DOCUMENT_TOKEN_TO_BE_REPLACED