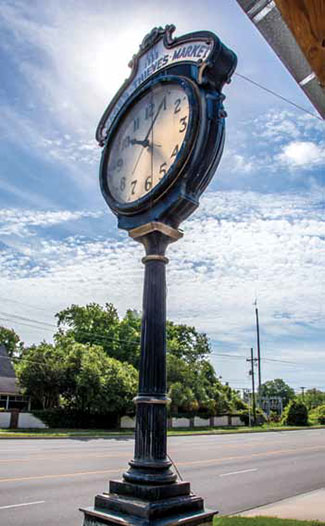 It took five years for Carl Page to find a permanent home for his business, a primitive building in an old lumber yard on a dusty, two-lane road along the route to a couple of small, quiet beach towns. More than half a century later, Page’s Thieves Market is still a Mount Pleasant icon, a place where locals and visitors – and, now, online shoppers – can browse for everything from furniture, food, books and clothing to loom spindles and tops to apothecary bottles.

But not for long.

Page’s Thieves Market, located at the old Thomas-Simmons Lumber Yard on Ben Sawyer Boulevard since 1964, will be no more as of Oct. 31 of this year. The owners of the property aren’t interested in renewing the lease on the ancient building, according to Linda Page, who has owned the company since 1988. That doesn’t mean, however, that the former Mount Pleasant mayor, who turned 60 in June, is thinking about whiling away her time aboard one of the rocking chairs currently for sale inside the somewhat cluttered but somehow organized Thieves Market.

“I’ll never retire unless I’m forced to,” said Page, an auctioneer for the past 25 years and a real estate agent for 20. “I haven’t figured out what I’m going to be when I grow up. I’m looking for a job. My family and I are trying to decide our next move.”

She said relocating to Awendaw is a possibility – “If we’re going to set up another shop, that’s the only logical place to go” – adding that she plans to stay in the auction business and might also consider a career in commercial or residential real estate.

Carl Page was an electrical contractor who traveled the country working at various military installations until he discovered Mount Pleasant. Linda, one of his three children, was just 6 weeks old when her parents chose to put down roots in the sleepy little town of barely more than 5,000 people. It was dubbed the Thieves Market from the beginning, though it was half a decade before the fledgling business moved to its permanent location. It started out in a metal shed on Schirmer Street, then moved to the spot on Coleman Boulevard that would later be the home of Boulevard Diner. After that building burned to the ground, the Thieves Market set up shop in two more places on Coleman before moving to Ben Sawyer, where it remained for 54 years.

Linda, 5 years old at the time, remembered her dad going on the road every few weeks, heading north to Maryland, Pennsylvania, New Jersey and New York to buy from “pickers,” who amassed large quantities of, well, “stuff,” then wholesaled it to Page and others like him. He would return to Mount Pleasant with his truck packed to the brim and his friends and neighbors wondering what he would be selling at the Thieves Market.

“Everyone in town knew when he was coming back for unloading day,” Linda explained. “They wanted to see what he had brought back, so they helped unload the truck so they could get first dibs.”

Later, Linda’s brother Michael would take the truck on the road, and Linda herself did the same for more than 20 years. Today, she said, most of her pickers are retired or have passed away. Now she picks up items at estate sales and auctions throughout South Carolina, and she also buys and sells online.

For a while, Linda’s mother, Maxine, also owned a store in Mount Pleasant, in the building that now is Haddrell’s Point Tackle and Supply, where Chuck Dawley, Ben Sawyer and Coleman boulevards meet. A popular bar, Whiskers, was upstairs.

Basic municipal services have never been available to customers, employees or owners of the Thieves Market. Though it’s situated within the town limits, Page said she was unable to tie into Mount Pleasant’s water or sewer system when she signed a 30-year lease on the building in 1988. Since then, she’s had to make do with a well, limited air conditioning in the office and gift shop areas, no heat and a port-a-potty – a very nice one, according to Page – behind the building.

“It’s the cleanest port-a-potty in the town of Mount Pleasant,” she exclaimed with pride.

Just about everything inside the Thieves Market is for sale, though there is one area of the building reserved for items that have special meaning for the Page family and for Mount Pleasant. Perched on a large ledge for all to see are: a Civil War-era wicker casket; a bust of King David with a spiked collar that once belonged to local resident Donnie Heins; a wagon owned by “a guy named Gilbert” that had been pulled by goats through the streets of Charleston; a statue of an African-American coachman that had been owned by local resident Herbie Livingston, who sold fireworks and later opened a museum where the Omar Shrine Convention Center now stands; a “This Bud’s for You” wreath used at the funeral service for Budweiser salesman Joe Spann; and a manikin that was in the storefront window of the Lipsitz Department Store in Beaufort for at least half a century.

Overseeing it all is a large statue of Bacchus, the Roman god of wine and revelry.

“We had the opportunity to buy it at an auction, so we decided to make him the guardian of the Memorial Corner,” Page explained.

Page was bitten by the entrepreneurial bug long before her parents passed away in 1981, and she and her brother Mike took over the Thieves Market. At the age of 12, she decided that raising rabbits might be fun and profitable. She bought two of the furry mammals and soon had many more, so she ran an ad in the local newspaper broadcasting that she had rabbits of all shapes, sizes and colors for sale. She was soon visited by representatives of the Society for the Prevention of Cruelty to Animals, who wanted to make certain she wasn’t dying her rabbits with food coloring.

As a child, she also sold Popsicles, watermelon slices and lemonade to drivers slogging their way toward Sullivan’s Island and Isle of Palms along Ben Sawyer Boulevard, the only land route to the barrier islands at the time.

Linda Page has spent her life buying stuff and selling stuff, and she’s especially fond of turning around items that can be repurposed. For instance, she found and bought 1,000 loom spindles at a flea market in North Carolina, then sold them for $1 each – cheaper for larger quantities. Another time, she acquired 10,000 apothecary bottle tops. A year later, she had only around 500 left.

She also is in the habit of buying box springs, which her daughter cuts apart into individual springs. Page said a man in Wisconsin bought some, then called her back and ordered more. Curious, she asked what he was going to do with them. He declined to say, but, not longer after, “He sent me the cutest snowman made of bed springs.”

Is politics a fun business as well? After being elected to the Town Council and winning one mayor’s election and losing another, is she planning to get back into the game?

“Of course,” she said. “But I don’t consider it politics. It’s public service. If you have it in your heart, I don’t think you can stay out of it. My heart will tell me when the time is right.”

For many of us, April 18 represents a looming and ominous deadline — Tax Day. Be it dread of the unknown, anxiety over how to navigate a complicated process, panic about penalties or stress about the … END_OF_DOCUMENT_TOKEN_TO_BE_REPLACED

Retiring from the fourth largest municipality in .the state of South Carolina after nearly 24 years of heading the Town of Mount Pleasant’s communications office is a momentous occasion for me. … END_OF_DOCUMENT_TOKEN_TO_BE_REPLACED

Perhaps you’ve noticed it as you’ve turned off Highway 17 onto Mathis Ferry Road, just past the first traffic circle. More likely than not, you haven’t paid it much attention. But that’s about to … END_OF_DOCUMENT_TOKEN_TO_BE_REPLACED