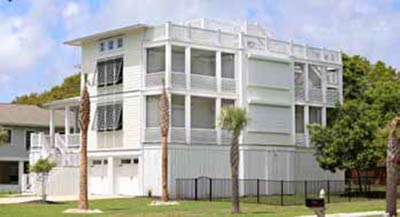 What is it about shutters that make so many Southern homes, well, “Southern”? After all, according to the dictionary, shutters are no more than, “a usually movable cover or screen for a window or door.” Of course, that’s not unlike designating South Carolina’s official canine, the Boykin spaniel, as nothing more than “a medium-sized breed of dog.”

For many homes East of the Cooper, shutters are, in fact, a design statement, a decorative addition to a residence that add a certain Dixie panache. But they’re much more than that.

As we head into the 2018 hurricane season, it’s not a bad idea to rethink shutters and how, in addition to providing a decorative home accouterment, they serve as a crucial first line of defense against the ravages of storm damage.

One local authority on this subject is J.D. Cooper, founder and owner of Lowcountry Hurricane Protection & Shutters, the only turnkey shutter company in the Charleston area that measures windows and doors, then engineers and manufactures a wide range of shutter products, from the primarily decorative to the powerfully storm-resistant.

According to Cooper, the majority of his business comes through word-of-mouth from satisfied customers or from searches on the internet. And, with 14 named storms expected this season – seven anticipated as hurricanes and three as major hurricanes – he already has over 120 shutter installations scheduled, with more on the horizon.

So, who exactly needs storm protection and where? According to Cooper, “To get true hurricane protection, every door and window should be covered. The larger the square footage of windows and doors in a residence or business, the more vulnerable to serious damage it is.”

Cooper noted that some homeowners, for example, feel that if their property faces east, only the windows and doors on that side of the structure need to be shuttered.

“If a storm hits the front of your building, it wraps around and creates negative pressure on the back side. Now you have that negative force pulling the storm’s force through. There’s no one side of a structure that’s any more important than the others. Plus, when you have 100 mphplus winds swirling around your home or business, there’s no way of predicting which side it’s going to hit.”

Lowcountry Hurricane Protection & Shutters offers property owners a range of decorative and protective products, from the popular Bahamas style, which hinges at the top; to Colonials, split in the middle and mounted to each side of the window; to manual or remote-controlled push-button roll-down shutters; accordion-style shutters; and very cost-effective storm panels and fabric shields.

All of these options serve specific customer needs and are created to match those requirements. As one recent customer, Adam Brinkman, put it, “I highly recommend Lowcountry Hurricane Protection & Shutters. They treat you with respect and install a very high-quality product. Preparing for the next storm will be quick and easy.”

Another Mount Pleasant couple, the Sanderells, vowed to recommend Cooper’s company “to everyone who asks, ‘Where did you get those beautiful Bahamas shutters?’”

So if you want your own Lowcountry home to conjure up visions of Scarlett O’Hara descending the staircase and you want to be protected against severe storm damage this hurricane season, shuttering those windows and doors is a very good bet. Just be sure to consult a seasoned professional who has already earned the confidence of your savvy-shuttered friends and neighbors.

People are drawn to the Lowcountry in large part because of the beaches, the salt marshes, the moss-draped oaks, the cypress swamps — the stunning natural landscapes that inspire awe and support an … END_OF_DOCUMENT_TOKEN_TO_BE_REPLACED

Click, Listen, Watch & Learn. Doug Holmes, "The Stats Guy" crunches and studies statistics in many fashions including the MLS in Charleston talks with host and publisher Bill Macchio about the … END_OF_DOCUMENT_TOKEN_TO_BE_REPLACED

John Powell, CEO and President of the Southeastern Wildlife Exposition (SEWE) talks with host Brian Cleary about the expo's art show featuring local and regional artists, and Powell talks about other … END_OF_DOCUMENT_TOKEN_TO_BE_REPLACED