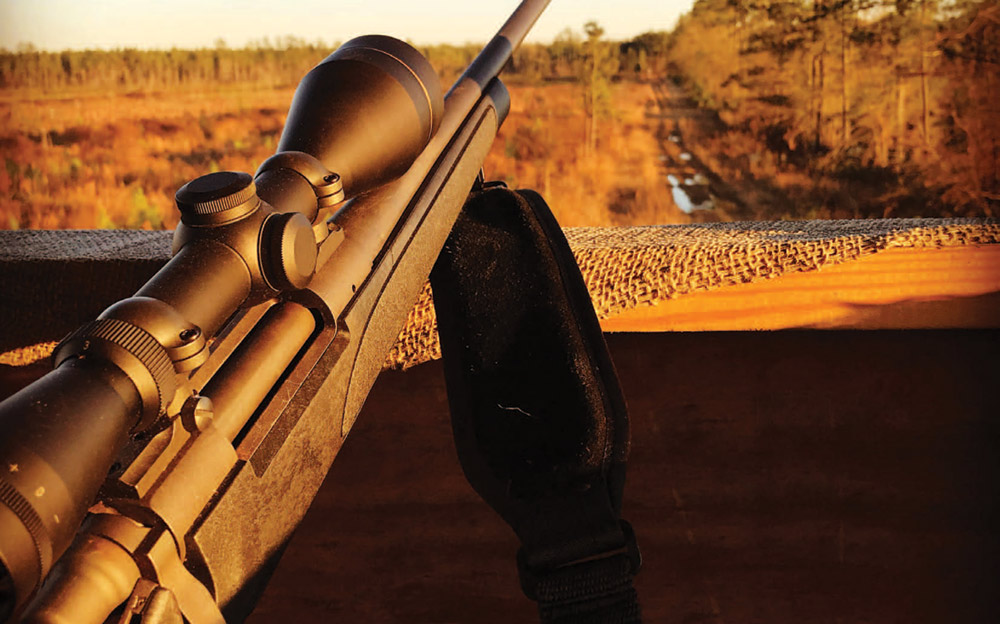 Finally catching my breath, I steadied myself and took one last look through my binoculars. Satisfied, I unloaded my rifle and climbed down the rickety ladder to solid ground. I walked slowly up the rice field to the deer that lay motionless on the edge of the field. I knelt beside her and sat quietly for several minutes. There was no cheering section – no one to slap me on the back or give me a hardy “attaboy.” This was my first deer. All of the hard work and planning had paid off. The seal had now been broken, and white-tailed deer hunting was in my blood at the age of 41.

What drives us to spend countless hours in the heat and mosquito-infested swamps of the Lowcountry preparing for the upcoming season? What pulls us out of warm, comfortable beds in the dead of winter to climb a tree in the pitch-black darkness to sit for hours on end in motionless silence? What force could draw us back to the woods week after week, hoping to catch that wily old buck just once in our crosshairs?

Every hunter’s motivation is different. Some seek a trophy and entry in the record books. Some want food for the table, while others bask in the serenity of the woods. Regardless of the motivation, hunters share a common bond that status and station in life cannot affect. The draw of the deer camp pulls from all ages, backgrounds and levels of skill. The draw cannot be explained, only experienced. Two Lowcountry residents who have experienced that pull are Ben Moise and Pearsall Smith. 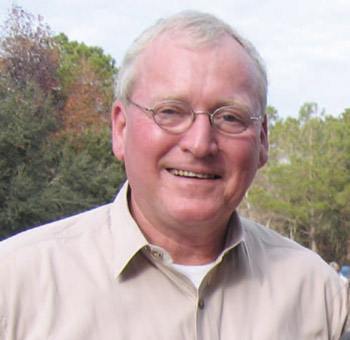 Ben Moise considers himself “an occasional deer hunter.” A retired South Carolina Department of Natural Resources conservation officer, Moise served the Palmetto State as a game warden for almost 25 years. An avid outdoorsman and accomplished outdoor writer, it was surprising to find that his first deer harvest came later in life, while in his 50s.

“I had been big-game hunting in Africa before my first whitetail,” said Moise.

When asked what style of deer hunting he preferred, Moise stated that he enjoys the old “spot-and-stalk” method, or hunting with dogs and their drivers on horseback.

“It’s exciting to hear the dogs running,” he said. “Hearing them in full cry, knowing that the deer is with them coming at you.”

When asked about still hunting from a tree with a rifle, he relayed that he had done that only once.

“Climbing up in that tree, I was petrified,” he explained, adding that he doesn’t even own a rifle.

Moise hunts mainly on private land with a group that is four- to five-generations deep. He enjoys the old traditions that have not changed in over 100 years. The draw for Moise is the entire scope of the hunt: the traditions and unchanged rules; the dog drivers on horseback; the sound of the dogs pursuing their quarry through the woods; the post-hunt gathering and barbecue meal; and “sharing the proceeds of the hunt on the dinner table.”

These are the things that draw the “occasional deer hunter” to the woods. 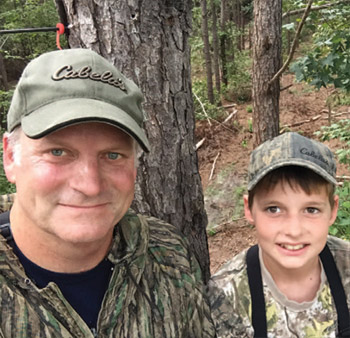 “I’ve been obsessed with the woods and the outdoors in general for as long as I can remember,” he said.

Smith, unlike Moise and myself, began deer hunting in his early years.

“I started deer hunting at age 14. My older sister dated a fellow at the time who had access to about 8,000 acres along the Okefenokee Swamp in South Georgia. I guess you could say that he was my ‘gateway’ to the whitetail.”

Today, some 39 years later, his passion for pursuing the whitetail is as strong as ever.

Smith’s career as a business-development manager takes him across the country on a consistent basis.

“My job takes me to urban environments every week. Nothing is more satisfying to me than to escape to a tree stand on a cool, fall day,” he said.

Currently, Smith hunts a 400-acre privately held property in Williamsburg County. The property is wellmanaged by the owners and club members. There are no motorized vehicles allowed and hunting is kept to a minimum – usually once per week and sometimes once every two weeks. This practice keeps interruptions to the herd’s travel patterns and routine to a bare minimum, thus allowing the deer to feel comfortable. According to Smith, the quality and quantity of animals present in that environment is amazing.

Whether you enjoy the solitude of a tree stand with a high-powered rifle while scanning the woods for movement or prefer being hunkered down at the base of a cypress tree on the edge of a swamp outfitted with a double-barreled shotgun listening to the cry of the dogs in pursuit of their quarry, whitetail deer hunting is a venture worthy of exploring. Deer hunters take to the field at all ages, levels of skill and stages in life. The camaraderie found at the club or camp is unique. Hunters new and old learn from each other.

According to Smith: “Most of my knowledge was, and still is, gleaned from acquaintances and friends who have spent much more time in the woods.”

Smith and Moise both suggest reading about and studying the sport. Whether it’s about traditions and timeless hunting rules or the mechanics and techniques of the hunting process, education and quality information is key.

How does one get involved? Smith said it best: “Use the manners your mother taught you.”

Put the word out that you are interested in hunting. Use social media and your circles of influence. Become a student of the sport. Connect with conservation groups such as the Quality Deer Management Association (www.QDMA.com). Learn the laws and rules by visiting the SCDNR’s website for licensing guidelines and season openings or taking a hunter’s education course (www.dnr.sc.gov). Finally, according to Smith: “If invited on a hunt, a handwritten thank you note or some token of appreciation will earn your way back as a guest.”

For many of us, April 18 represents a looming and ominous deadline — Tax Day. Be it dread of the unknown, anxiety over how to navigate a complicated process, panic about penalties or stress about the … END_OF_DOCUMENT_TOKEN_TO_BE_REPLACED

Retiring from the fourth largest municipality in .the state of South Carolina after nearly 24 years of heading the Town of Mount Pleasant’s communications office is a momentous occasion for me. … END_OF_DOCUMENT_TOKEN_TO_BE_REPLACED

Perhaps you’ve noticed it as you’ve turned off Highway 17 onto Mathis Ferry Road, just past the first traffic circle. More likely than not, you haven’t paid it much attention. But that’s about to … END_OF_DOCUMENT_TOKEN_TO_BE_REPLACED