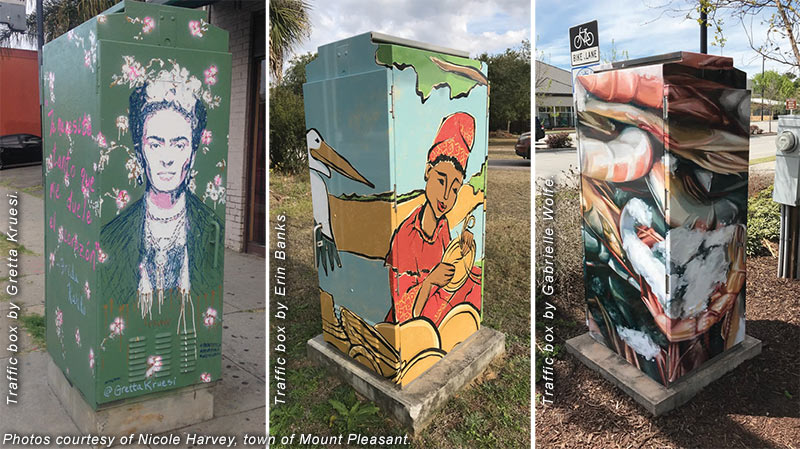 Chances are you’ve been at a red light in Mount Pleasant when suddenly something rather colorful catches your eye. Traffic boxes throughout town don everything from intricate paintings of the Ravenel Bridge to scenes of sea turtles trekking their way to shore. This artful initiative has helped to beautify an already picturesque community – adding artistry among sidewalks, storefronts and tall palms. This fall, the town called for more creatives to bring their best designs forward and the response was truly remarkable, with 107 submissions sent from 47 artists throughout the Lowcountry.

“The original idea that the Culture, Arts and Pride commissioners had was to wrap or paint the big green SCE&G electrical boxes that you see throughout town,” said Nicole Harvey, special events manager for the town of Mount Pleasant. “After much unsuccessful effort to work through the logistical challenges associated with that specific type of box, the commissioners decided to explore the possibility of wrapping traffic boxes instead. This proved to be much more feasible, and planning was in full swing in the fall of 2015. Since then, we have wrapped 16 boxes on Highway 17 from Houston Northcutt to Carolina Park Boulevard. This year we will be installing six more boxes in our fourth phase. Three of those will complete the remaining boxes on Highway 17, and the other three will be done at selected intersections on Coleman Boulevard or Ben Sawyer.” 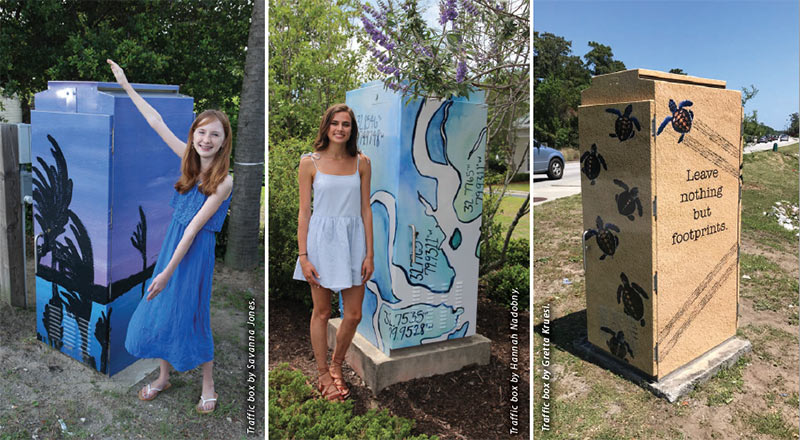 The new winning artists were selected at a meeting in October, and soon their designs will be adhered to traffic boxes throughout the winter and spring.

“The feedback on this project has been incredible from the beginning,” said Harvey. “Our installer said people stop all the time and tell him how much they love the boxes. We get emails and phone calls stating the same, and people often tell us personally how much they enjoy seeing them as they drive along the highway or wait at a light. I think they offer a unique look into Lowcountry life in a way that is truly extraordinary.” 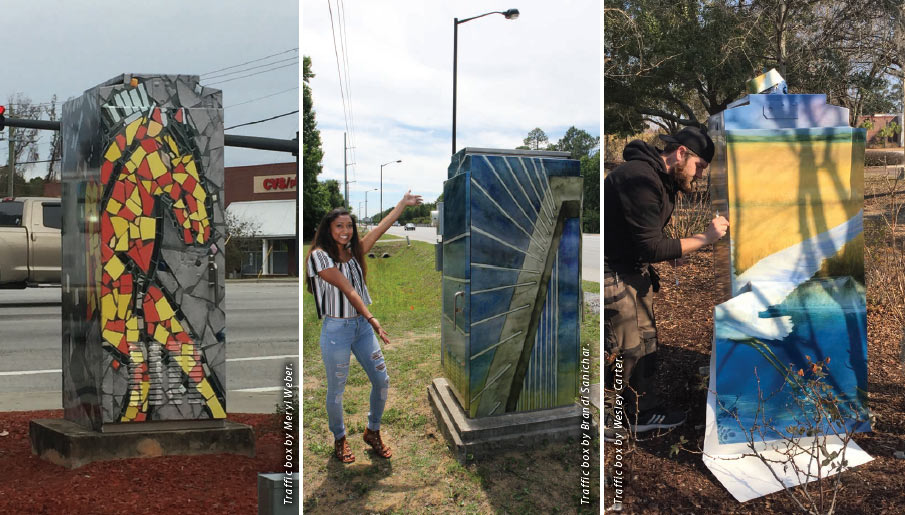 One of the previously chosen traffic-box artists, Gretta Kruesi, saw the project as an opportunity to further make a connection to her mural on Isle of Palms’ Front Beach restroom facility, even after considering several other designs.

“I must have created a dozen different designs but ultimately went with the turtles as a continuum of my murals down at Isle of Palms. A big focal point on the building is three large turtles, so I thought putting hatchlings at the other side of the Connector would connect it, so to speak.”

People are drawn to the Lowcountry in large part because of the beaches, the salt marshes, the moss-draped oaks, the cypress swamps — the stunning natural landscapes that inspire awe and support an … END_OF_DOCUMENT_TOKEN_TO_BE_REPLACED

Click, Listen, Watch & Learn. Doug Holmes, "The Stats Guy" crunches and studies statistics in many fashions including the MLS in Charleston talks with host and publisher Bill Macchio about the … END_OF_DOCUMENT_TOKEN_TO_BE_REPLACED

John Powell, CEO and President of the Southeastern Wildlife Exposition (SEWE) talks with host Brian Cleary about the expo's art show featuring local and regional artists, and Powell talks about other … END_OF_DOCUMENT_TOKEN_TO_BE_REPLACED