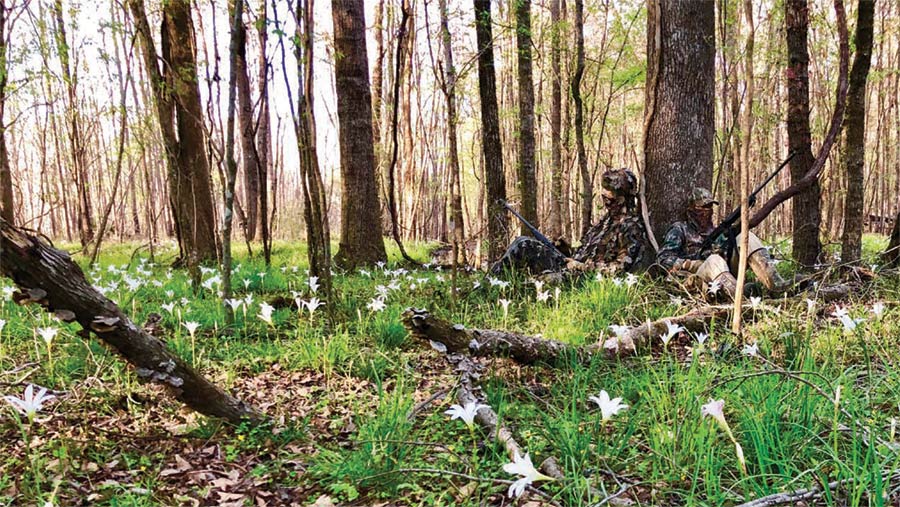 I sat frozen with my shotgun resting between my knees, pointed at the food plot in front of us. The lower half of my body was either numb or cramped with pain. I had been sitting atop an exposed root on the side of a hill overlooking a clearing for hours. The thin cushion attached to my vest offered little comfort or relief from the hard ground. I didn’t dare move or try to shift to a more comfortable position. My hunting partner had expertly called in a large gobbler. The “boss” had run off several 2-year-old birds at the top of the hill some 300 yards away and had now made his way swiftly down the hill to our position. The sweet, soft calling from my buddy had stopped. Suddenly, the target area filled with birds. Hens were scratching and milling about a mere 10 to 15 yards away. Some adolescent males, or “jakes,” had appeared as well. It was chaos and only a matter of time before one of them spotted us and blew our cover. The big tom was nowhere to be seen. I struggled to stay focused.

Why wasn’t Carl calling anymore? Where did our prize go? Had seconds passed or was it hours? Like a magician, the old boy appeared directly in front of me. His red, white and blue head was a beautiful sight to behold. He boldly entered the food plot and took about two steps forward. I pushed the safety off, buried my cheek against the stock, took aim down the barrel and pulled the trigger. That old 12-gauge broke the silence in grand style. I hit him square in the neck at the waddles, and he dropped.

Hours of planning, preparation and strategic hunting ended in seconds. My first wild turkey lay on the ground at 25 paces.

Wild turkey hunting is a sport like no other. According to East Cooper native and avid turkey hunter Clark Coker, it’s second to none.

“I don’t know that there is another sport like it. It is truly a chess match between you and your quarry,” said Coker, who has spent countless hours in the field honing his skills.

There are five subspecies of wild turkey: Eastern, Osceola (Florida), Rio Grande, Merriam’s and Gould’s. Each has its own geographical range and unique characteristics. According to the National Wild Turkey Federation: “Wild turkeys are among the most popular game animals in the world. The wild turkey subspecies are inherently challenging, incredibly alluring and unique in their own way. Each of the five subspecies display different physical and behavioral characteristics that define them.”

The subspecies hunted in the Lowcountry is the Eastern.

Hunters use many tools to call to a bird or group of birds. The premise of the “calling” is for the hunter to imitate the sounds of a female, in most cases, hoping to lure the targeted male into striking distance, which is generally less than 35 yards. Calls vary in form and function. Friction calls, such as box calls or slate calls, use various surfaces such as slate, glass, metal or wood, while mouth calls use thin, specialized reeds that fit along the roof of the mouth and require a great amount of practice to master. It is not uncommon for the average hunter to carry multiple calls of varying styles.

According to Coker, “I’m a guy that has all of the tools on the belt. I use each in certain situations, depending on how things are going.”

Regarding the weapon of choice, most hunters use a shotgun with a very tight pellet pattern to target the vulnerable head and neck area.

Turkey hunting is interactive. The hunter uses various techniques in an attempt to locate, or “strike” a bird. Planning requires meticulous scouting and looking for birds and signs of their presence in the area such as “scratched” or disturbed leaves and soil. One of the most common practices is getting positioned in an area before dawn, blending in and listening for activity. There is nothing more exhilarating than hearing the unsolicited gobble of a mature tom at daybreak announcing his presence to the world.

Whether you choose to “run and gun” through the woods or passively sit in a ground blind attempting to draw the birds to you, turkey hunting offers great adventure. Enjoy the experience and the lessons that follow.

Coker said it well: “Just when you think you’ve figured them out, they will embarrass and frustrate you.”

Regardless of your level of experience or success from field to supper table, turkey hunting is a sport worth exploring.

For more information about hunting the wild turkey, visit www.NWTF.org.

For many of us, April 18 represents a looming and ominous deadline — Tax Day. Be it dread of the unknown, anxiety over how to navigate a complicated process, panic about penalties or stress about the … END_OF_DOCUMENT_TOKEN_TO_BE_REPLACED

Retiring from the fourth largest municipality in .the state of South Carolina after nearly 24 years of heading the Town of Mount Pleasant’s communications office is a momentous occasion for me. … END_OF_DOCUMENT_TOKEN_TO_BE_REPLACED

Perhaps you’ve noticed it as you’ve turned off Highway 17 onto Mathis Ferry Road, just past the first traffic circle. More likely than not, you haven’t paid it much attention. But that’s about to … END_OF_DOCUMENT_TOKEN_TO_BE_REPLACED