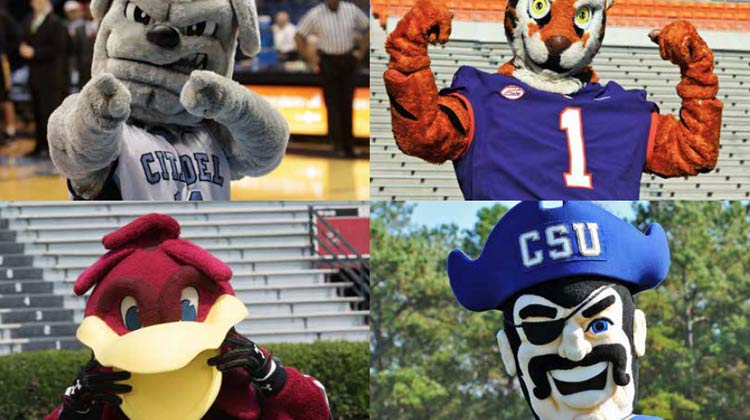 They are the embodiment of a university’s ultimate ambassador. They pose for an infinite number of photos at parades, pep rallies and tailgates; appear at check-passing and groundbreaking ceremonies; and, of course, attend all of the athletic contests.

These devoted student diplomats are popular for loyalty sake yet successful because they communicate only by gestures. There’s positively no talking.

Not all colleges can have live mascots, though the University of South Carolina showcases live gamecock Sir Big Spur, and The Citadel has paraded a lineage of live bulldogs on its football sideline

But almost every college today has a Muppet-like costumed student dressed, such as USC’s “Cocky,” Clemson’s “Tiger,” The Citadel’s “Spike,” and Charleston Southern’s “Bucky the Buccaneer.”

The mascot craze soared in 1974 with the San Diego Chicken (a.k.a., “The Famous Chicken”). San Diego State University student Ted Giannoulas donned a chicken suit in an animated TV commercial for KGB Radio and then entertained the crowd at more than 520 San Diego Padres baseball games, where he and his antics connected with fans and became a smash to the point that “The Chicken” was named one of the 100 Most Powerful People in Sports for the 20th Century by The Sporting News.

Mascots now have their own Mascot Hall of Fame that opened in 2018 near Chicago (in Whiting, Indiana), by David Raymond, who acted as the Phillie Phanatic from 1978-93 and is the son of the University of Delaware’s legendary football coach Tubby Raymond.

Here’s a look at four of the state’s football-playing school’s mascots while recalling what one student in the costume stated, “It’s strange to have the power to make people happy just by walking into a room. I love that I can make someone smile just by being there.” 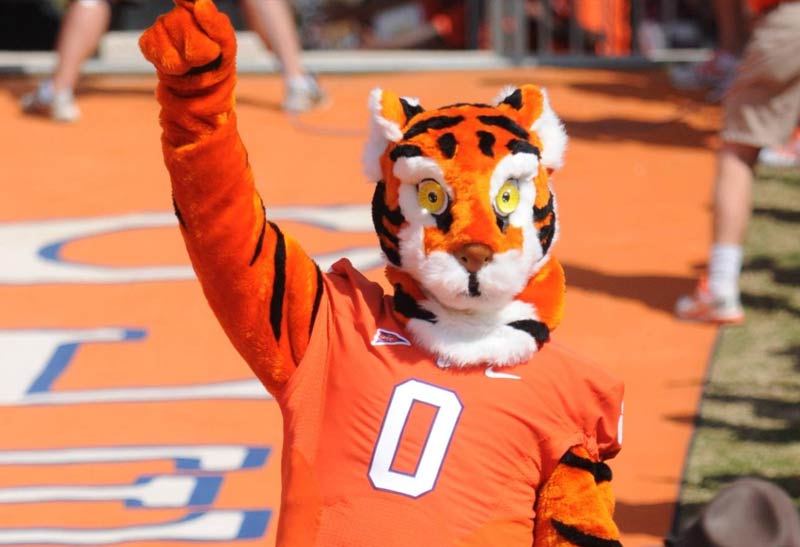 Student Gabby Hays is known as the first to don The Tiger suit when he made its inaugural appearance in 1954, and Jay Williams is credited as the first Tiger Cub (also referred to as Cubby), a smaller version of The Tiger who arrived in 1993 and is The Tiger’s nephew.

The Tiger is the yellow-eyed mascot’s official name, and he unquestionably is the big man on campus while he ranks among the Top 10 mascots and appears in ESPN promos. On the other hand, Cubby arguably gets a little more latitude and acts sillier.

At football games, only The Tiger is permitted to perform pushups after Clemson scores — one pushup per point. When Clemson scores again — and most recently they’ve been scoring at will — the mascot, placed on a platform in a corner of the stadium, does a pushup for every point on Clemson’s side of the scoreboard as the student section yells the count.

“We have one returning student who is the primary mascot and one or two new students in training,” said Tori Palmer, Clemson’s spirit program coordinator. There are tryouts with former mascots serving on the panel. It is a process that involves reactionary skits, communicative skills (via gestures) and a pushup evaluation, in addition to height restrictions and the appropriate attitude.

Interestingly, there are records kept for the number of pushups performed by The Tiger. Ricky Capps holds the single-game record of 389 pushups, while Jon Potter marked 1,549 during the 2000 season, and Mike Bays performed 2,216 career pushups from 1994-97.

Longtime Clemson athletics staffer John Seketa compiled a book in 2015 called “Clemson Through the Eyes of The Tiger.” In that work, each student who donned the costume chronicles a specific game or circumstance that made his time as The Tiger most memorable.

Chris Carter, who was The Tiger in 1977-78, was part of the cheerleading crew that put an orange letter on white poster board that spelled C-L-E-M-S-O-N, and a cheerleader was assigned to a respective seating section, signaling the group to yell the specific letter. It didn’t take long after that for the stadium-wide spelling lesson to become a standing tradition.

The Tiger owns a complete wardrobe and a world of props with which to utilize. 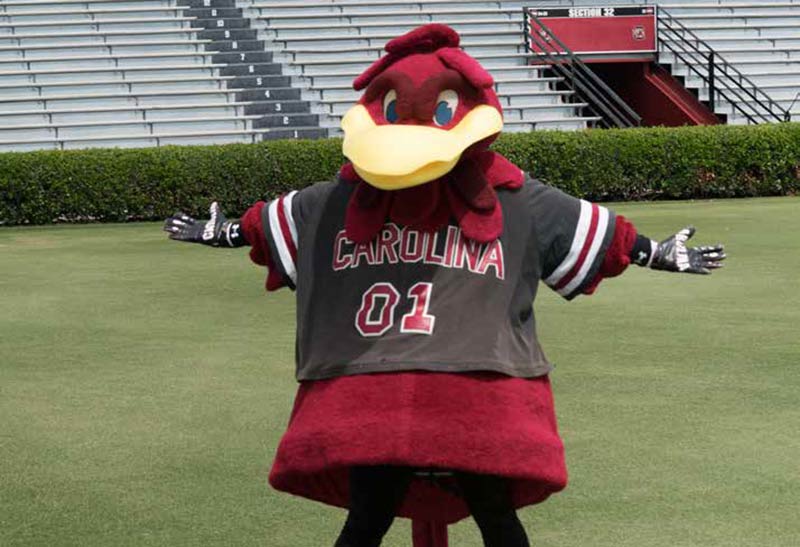 The Palmetto State’s flagship university’s nickname is the Gamecocks, named after Gen. Thomas Sumter (called the “Carolina Gamecock” for his fierce fighting tactics during the Revolutionary War). While Carolina’s loyal fans — particularly women — sport white ball caps with the word “COCKS” in garnet may cause heads to swivel elsewhere, there’s not a raised eyebrow around these parts.

USC’s football pregame activities are surrounded by the music of “2001: A Space Odyssey” as the marching band blankets the field. A dual climax comes as the team sprints onto the Williams-Brice Stadium grass and Cocky makes his grand entrance at midfield.

Cocky, truly one of the more colorful mascots of our time, was honored as being named the official mascot of the College World Series in Omaha in 1981 and 1982; Universal Cheerleading Association Mascot Competition Champion in 1986 and 1994; and, in 2003, Cocky was named the Capital One National Mascot of the Year, their version of a national championship.

Sir Big Spur, the live Aiken-based gamecock, is referred to as the “Most Involved Mascot in Sports” and is listed annually among the best live mascots (Smokey, the University of Tennessee’s Bluetick Coonhound is among the tops, as are LSU’s Mike the Tiger and the University of Colorado’s Ralphie the Buffalo). The life expectancy of a gamecock is about a decade, and fans are currently enjoying Sir Big Spur IV.

Although Cocky is the University of South Carolina’s most well-known mascot, he was not its first, as student John Nelson — who later became a biology professor at USC — started dressing as The Rooster as a student in 1971. Big Spur was introduced during homecoming in 1974, and the current version of Cocky, portrayed as the son of Big Spur and worn by Robert Lane, was introduced during the 1980 homecoming game. 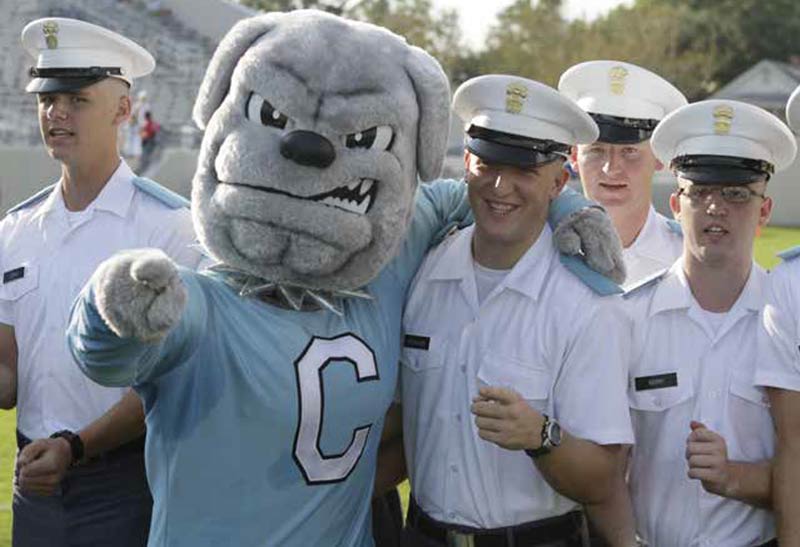 Bulldogs are noted for their vigor and composed disposition. They are fiercely loyal and their grip is very powerful against resistance.

Records point to 1909 as the first official use of “Bulldogs” as the military college’s sports teams’ nickname after a local sports writer claimed The Citadel footballers played like bulldogs. It wasn’t until 1928 that a live bulldog mascot first roamed Johnson Hagood Stadium’s sidelines, not long after the popular football team outgrew College Park. In 1937, Capt. George Lockwood loaned his pet bulldog, Sunny Sue, and later Suzie and Jack, for the Saturday home games on Hagood Avenue through the 1940s.

Plebe, Plebe II, III and IV lived on campus under cadet supervision through 1964. And then Lt. Col. Thomas Courvoisie, the assistant commandant made famous by one of Pat Conroy’s earliest books, “The Boo,” served as the caretaker for Boo, Boo II, III and IV through the mid-1970s.

From 1977-90, Colonel Ruff (named to honor Citadel All-America linebacker Brian Ruff), appeared at the football games and was under the care of the R.D. Moseley family. Colonel Ruff met his unpredicted early demise in 1990 at the jaws of an alligator. From 1991-02, Boo V, VI, creation of the Citadel Football Association’s “Beautiful Bulldog Contest.”

Today, the live bulldogs dwell on campus during the academic year and are cared for by the Corps of Cadets, while local vet Dr. John Bradford, a former Citadel lineman, looks after the dogs during the other times.

The cheerleader, “Spike,” is a cadet and, like his colleagues, makes many local appearances. His face has been consistent with the college’s familiar Spike logo that was unveiled in the late 1980s.

The live bulldogs’ primary duty is to provide morale for the Corps of Cadets, faculty and staff and all of the Bulldogs’ athletic teams. Other responsibilities include barking at opposing teams, consuming numerous dog biscuits throughout the day and being pampered by the cadets and visitors alike. 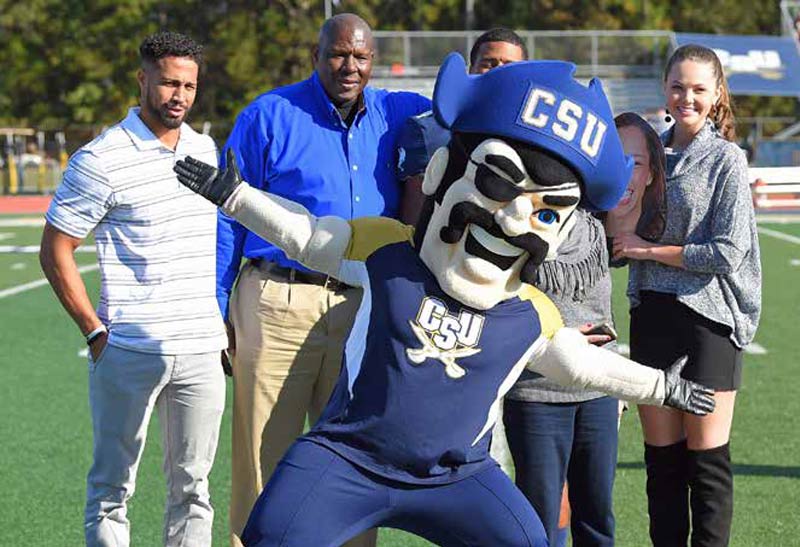 “We wanted to introduce something new and fresh, something that would be great for our coaches, athletes and students and fans,” said new Director or Athletics Jeff Barber, when Charleston Southern University recently unveiled plans for the “new” Bucky the Buccaneer.

When Charleston Southern emerged on the academic scene in 1964 and the first basketball team took the floor in 1965, supportive fans donned eye patches, bandanas and earrings and brought fake swords to the game. Though the college wanted a more Christian moniker to go along with the school’s original name — Baptist College — students wanted a more combative mascot, and Buccaneers came to be.

College lore points to the athletics department’s first trainer, Chuck Welty, as being credited with convincing a student to adorn swashbuckling swag, attend the game and hang out with the cheerleaders.

Through the years, there have been several variations of the Buccaneer logo. The recently introduced one is described as a “gentleman’s buccaneer” because it features both a feather and bandana, which makes it exclusive, as most iterations feature one element or the other.

“The combination of the feather and the bandana is unique to CSU,” Barber added. “It’s exciting that our students, alumni and fans will have additional options in supporting our Buccaneers.”

With input from coaches, athletic department officials and three of Barber’s friends who work for Walt Disney Animation, Tyler Stokes, a graphic designer in CSU’s marketing and communications department, created the new logo.

“As an alum, I am proud to be able to present an updated look to Bucky, while staying consistent in the University’s branding and vision for the future,” said Assistant AD for Marketing Anna McSwain. “This is progress our students, past and present, have been ready for, deserve and are excited about.”

Bucky the Buccaneer is in a transitional phase as the university continues to rebrand CSU athletics.

“With the new logo design, we hope to increase his image and implement some new mascot traditions,” McSwain added.

People are drawn to the Lowcountry in large part because of the beaches, the salt marshes, the moss-draped oaks, the cypress swamps — the stunning natural landscapes that inspire awe and support an … END_OF_DOCUMENT_TOKEN_TO_BE_REPLACED

Click, Listen, Watch & Learn. Doug Holmes, "The Stats Guy" crunches and studies statistics in many fashions including the MLS in Charleston talks with host and publisher Bill Macchio about the … END_OF_DOCUMENT_TOKEN_TO_BE_REPLACED

John Powell, CEO and President of the Southeastern Wildlife Exposition (SEWE) talks with host Brian Cleary about the expo's art show featuring local and regional artists, and Powell talks about other … END_OF_DOCUMENT_TOKEN_TO_BE_REPLACED