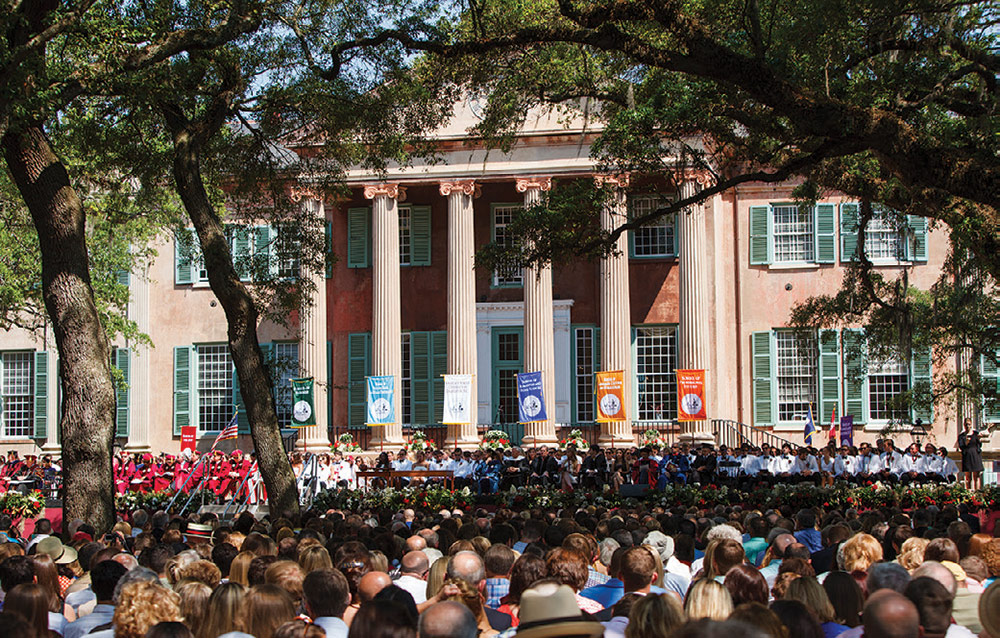 Featuring Randolph Hall, the College of Charleston’s oldest building (1828) and giant live oaks draped in Spanish moss as a backdrop, the area surrounding the Cistern makes for a photogenic location to host a graduation. The College of Charleston (CofC) has held its spring commencement ceremonies on the Cistern — the name referring to the large, grassy, oval area fronting Randolph Hall — for nearly 90 years. Some of the Cistern’s graduation rituals are now established tradition, but where did they originate, and why did the Cistern become the go-to graduation spot? 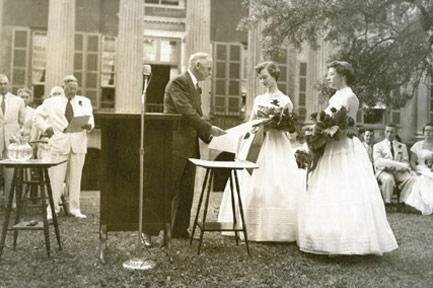 The Cistern was built in 1857, originally designed to collect rainwater from the roofs of Randolph Hall and the Towell Library to curb campus flooding and was used as a reservoir for drinking water and for fighting fires, according to Tony Meyer (Class of ’49), executive secretary emeritus of CofC’s Alumni Association.

Graduation didn’t move to the Cistern until the early 1930s. Before that, it was held at Alumni Hall or various churches around downtown, noted retired CofC English Professor Emeritus and author of “A History of the College of Charleston (1936-2008)” Dr. Nan Morrison.

“At that time, the Cistern was the whole world of the College of Charleston,” explained Morrison.

A term was even coined called “cisternating,” which referred to hanging out at the Cistern. At one time, mandatory daily prayers were held at the College Chapel (now Alumni Hall), and, when chapel released early, students would gather afterward to socialize on the Cistern, explained Meyer. 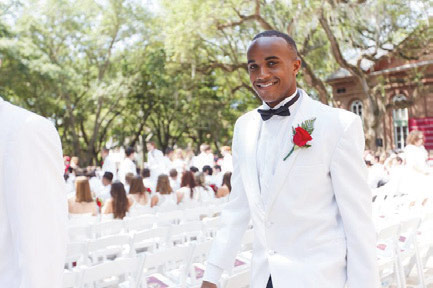 Holding graduation at the Cistern gradually became tradition, and walking across, or “crossing the Cistern,” as students were handed their degrees became something of a sacred rite, Morrison said.

In the 1930s and into the 1940s, both faculty and graduates sat on the Cistern during graduation, but, eventually, only the students sat there. For a long time, the entire graduating class could fit on the Cistern, but, in the 1980s, they outgrew the space and extended the Cistern to accommodate the growth. They have kept expanding it since to meet the needs.

As enrollment boomed, CofC ultimately divided graduation into two groups, and now the spring class is divided into three separate ceremonies so that everyone (including the graduate school) can experience “crossing the Cistern,” explained CofC Director of Alumni Communications Karen Jones. Apart from a few occasions of inclement weather — and a polio outbreak in 1939 — spring graduation has been consistently held at the Cistern since the 1930s. The winter graduation ceremonies are held in the North Charleston Coliseum.

In lieu of cap-and-gown attire, CofC grads sport white at graduation with the men clad in dinner jackets and the women decked out in white dresses reflecting societal fads.

In the 1930s, CofC derived the practice of wearing formal attire at commencement.

President Harrison Randolph — for whom Randolph Hall is named — had stated in a 1938 letter that CofC students’ dressy graduation garb followed proper fashion etiquette for serious afternoon attire (at that time graduation was held in the afternoon). In terms of the color, white clothing was better for reflecting the sun, and wearing white after Easter was deemed acceptable in high society.

After “Gone with the Wind” was released in 1939, women’s graduation dresses became even more elaborate, said Morrison. Over the years, women have worn white dresses of varying lengths and styles, depending on the fashion en vogue. Men began donning the now-familiar white dinner jackets in 1966.

Jones recalled that graduating classes used to meet and hold a vote on what they would wear for commencement, and they always chose white as the attire color. The tradition became so entrenched that classes stopped voting on it and just wore different shades of white.

Wearing roses appears to have roots in the 1930s, when women carried carnations. By 1943, that had switched to the rose bouquets women carry today, as well as the the rose boutonnieres worn by men. Jones explained that there has been leeway concerning this tradition, with grads now toting different kinds of flowers other than roses, including sunflowers.

The Mother’s Day date for spring graduation was more of an accident. Throughout the college’s history, graduation has been held during six different months, Morrison said. For a time, it was held in June, but President Randolph moved commencement to May because it was less hot. Generally, graduation had always been held on a Tuesday, but, in 1977, then-President Ted Stern changed it to a Sunday. That Sunday happened to fall on Mother’s Day, and a “tradition was born,” according to Morrison’s book.

For many of us, April 18 represents a looming and ominous deadline — Tax Day. Be it dread of the unknown, anxiety over how to navigate a complicated process, panic about penalties or stress about the … END_OF_DOCUMENT_TOKEN_TO_BE_REPLACED

Retiring from the fourth largest municipality in .the state of South Carolina after nearly 24 years of heading the Town of Mount Pleasant’s communications office is a momentous occasion for me. … END_OF_DOCUMENT_TOKEN_TO_BE_REPLACED

Perhaps you’ve noticed it as you’ve turned off Highway 17 onto Mathis Ferry Road, just past the first traffic circle. More likely than not, you haven’t paid it much attention. But that’s about to … END_OF_DOCUMENT_TOKEN_TO_BE_REPLACED