Meeting Street Schools is a Charleston-based nonprofit group founded by Benjamin Navarro, a Charleston businessman and philanthropist who also owns LTP Tennis in Mount Pleasant and the operations of Family Circle Tennis Center and Volvo Car Stadium on Daniel Island. 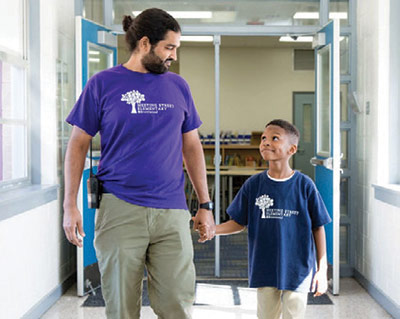 students in pre-K through fifth grade and were founded on the principle that all children can excel in the classroom, regardless of their ZIP code or socioeconomic status. The mission is to create a model of quality public education for kids in underserved neighborhoods.

Meeting Street School’s vision is to “prove what is possible for all students in South Carolina and to fundamentally alter expectations for educators and students working in schools that serve under-resourced communities. We believe that educational opportunity is the gateway for economic and personal achievement.”

The schools are unique. The goals are large. And the results are impressive.

The proof is in the test results:

2. Meeting Street Elementary at Brentwood opened in 2014 as MSA’s first public-private partnership in the heart of North Charleston. This school is a unique partnership between the Charleston County School District and Meeting Street Schools where MSS operates the school. Close to 100% of the students qualify for free and reduced-price lunches.

3. Meeting Street Elementary at Burns opened in 2018 and is a public, neighborhood, Charleston County School District elementary school — similar to MSE at Brentwood. It has an attendance zone like every other public school and is operated by MSS. There are no admissions standards. All public school children living in its attendance zone can attend.

Click, Listen, Watch & Learn. Doug Holmes, "The Stats Guy" crunches and studies statistics in many fashions including the MLS in Charleston talks with host and publisher Bill Macchio about the 2022 … END_OF_DOCUMENT_TOKEN_TO_BE_REPLACED

John Powell, CEO and President of the Southeastern Wildlife Exposition (SEWE) talks with host Brian Cleary about the expo's art show featuring local and regional artists, and Powell talks about other … END_OF_DOCUMENT_TOKEN_TO_BE_REPLACED

I’m sure you’ve heard the saying, “a picture is worth a thousand words” or “it takes a village.” Both of these popular expressions apply to the journey I recently embarked on, which culminated on … END_OF_DOCUMENT_TOKEN_TO_BE_REPLACED