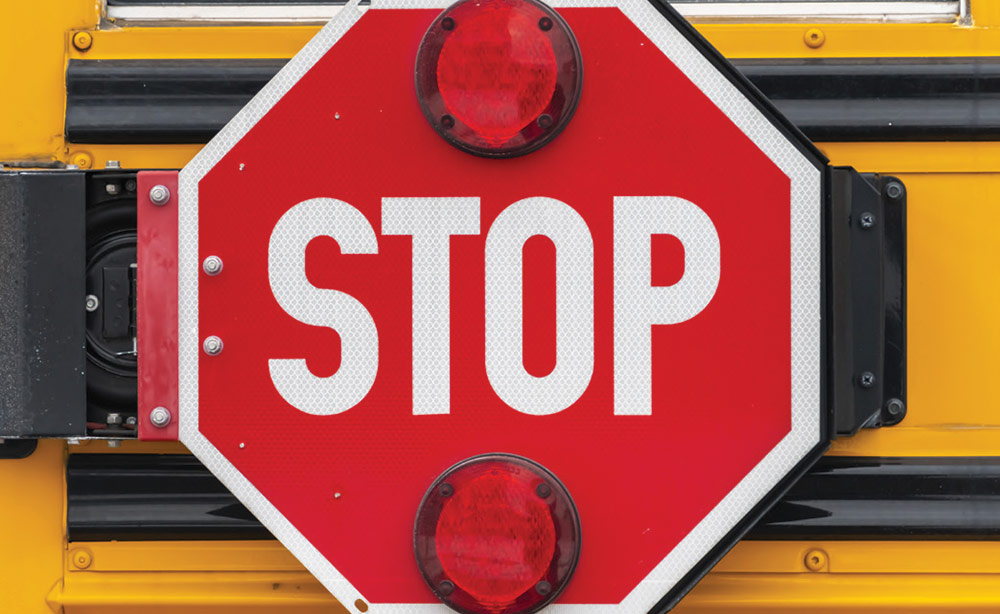 School bus safety is an important topic for parents, school administrators and police departments everywhere. Across the nation, the potential for devastating consequences is real for anyone traveling our roadways.

In the Charleston County School District alone, 367 buses make four runs daily, transporting nearly 22,000 students. “We have 80 schools in our district, and the county is 100 miles north to south and 30 miles east to west,” explained Jeff Scott, transportation director. “We service rural and suburban areas, (each with their) own challenges.”

Scott, who has been with CCSD since 2005, is referring to how some smaller schools in the district may have two buses, while a larger school, such as Wando High School, has 45 buses running morning and afternoon routes that transport approximately 2,000 students.

“The biggest safety concept I want drivers on the roads to remember is to simply pay attention. We want to get our students to and from home safely,” said Scott.

The danger is real, as reported by the South Carolina Department of Public Safety. From 2011-2015, 1,244 people were injured in collisions involving a school bus, with 15 of those people being killed.

Throughout the 2018-2019 school year, random school bus drivers in the tri-county area were asked, off the record, what the most common mistake was other drivers made regarding school buses. The much-repeated answer was drivers ignoring the stop sign and lights deployed on the school bus while making a stop for pick-up or drop-off. Drivers of passenger cars will actually pull around a stopped school bus.

“All drivers need to learn where they need to stop for a school bus and when they don’t have to,” said Scott. “We always try to make a right-hand pick up at bus stops when possible, but other drivers need to pay attention. Don’t run into a big, yellow school bus.” 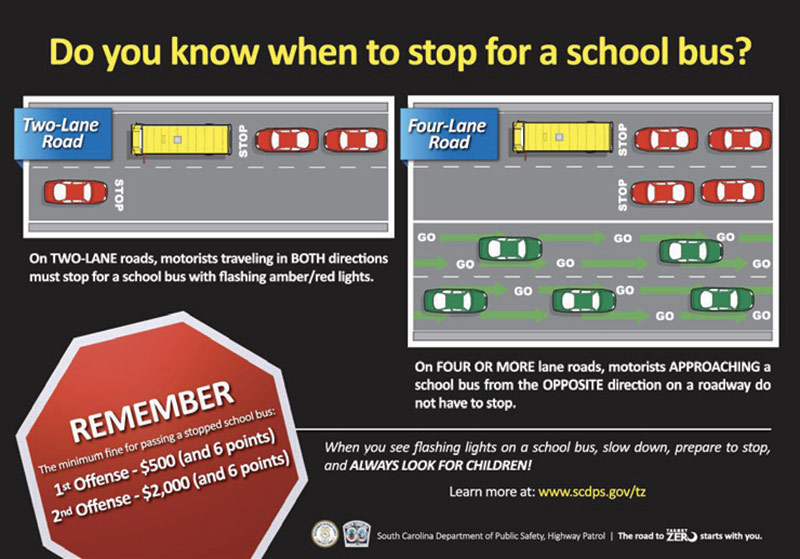 Suburban areas have heavy traffic issues, so drivers need to have patience when a school bus stops on the highway or near a busy intersection. Scott pointed out, “A few extra minutes is not worth something bigger happening.”

Rural areas do not have a lot of lighting or sidewalks, so the phrase “pay attention” should ring strongly in those locations as well.

Lance Corporal Matt Southern of the South Carolina Department of Highway Patrol agreed: “People get impatient in and around school buses. We have to give the school bus drivers the time to safely pick up the students. There is also up to a $1,062.50 fine for anyone caught passing a stopped school bus and six points off your driver’s license.”

Drivers should know that, in South Carolina, school buses that are equipped with cameras are clearly able to show the driver, make of the car and the license plate. And the driver can later be charged by law enforcement.

Knowing when to stop for a school bus on a roadway is part of your license agreement to be a driver on the roads. “It always depends on the number of lanes on the road as to when you must stop for a school bus,” said Lance Corporal Southern. “More than one lane and going in the same direction of the school bus, you are required to stop because students will only discharge to the right. The opposite side does not have to stop.” 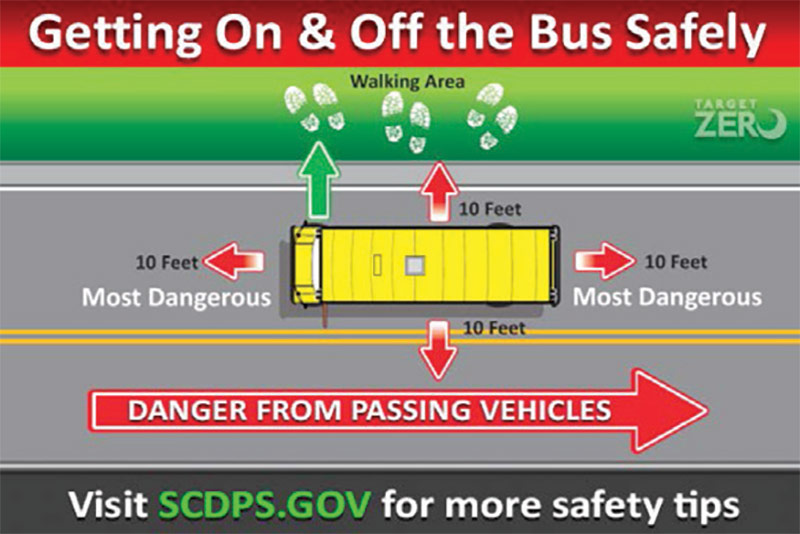 Lance Corporal Southern also reminds drivers that in and around school zones, the speed limit is reduced. Typically, around the beginning of each school year there will be heavier congestion as people figure out traffic patterns, so be sure to give yourself some extra time.

“From a safety perspective, people need to put the phone down and look up. My biggest concern are the students walking home (who) are not in a protected bus,” further detailed Scott.

Lance Corporal Southern confirmed that in the Berkeley County School District, there have been many rear-end collisions with school buses.

It is often when fall turns to winter, when we turn our clocks back to standard time, that it becomes more dangerous for students walking to and from their bus stops. The dark mornings and early evenings put our children at greater risk of injuries from traffic crashes.

The South Carolina Department of Public Safety has several lifesaving practices that parents can teach their children. Let your children know that at dawn and dusk they should wear bright or fluorescent clothing such as day-glo green, hot pink or construction-worker orange. These colors amplify light and help the wearer stand out in a crowd. Additionally, wearing retro reflective gear or carrying a flashing light, such as a taillight or strip attached to a bicycle or backpack, allows motorists to see pedestrians or bicyclists more clearly.

Prior to the school year beginning, or even for the first several days of school, walk with your child to and from the bus stop, and teach by your actions. Remember to “stop; look left, right, left; and listen,” before stepping off a curb, even when there is a traffic signal. Accompany your children as often as possible and exaggerate your motions and head turns so that your child can clearly comprehend what you are doing. This simple act can save your child’s life.

Parents can help by placing everything a child must carry in a backpack or school bag so that he or she won’t drop anything along the way and feel the need to stop and pick it up. Having enough time to make it to the bus stop will eliminate running, which can be dangerous.

“I also want people to know that if you see something wrong or have a complaint about something you see regarding our buses or bus drivers, then I want to know. There is a complaint form on every school’s website, under the transportation tab, or even on the district website, and you can fill it out,” detailed Scott. “By filling out this form, the comment is added to a spreadsheet, and it will not clear out until it is reviewed. My team follows up on this spreadsheet daily, and it means there is a record. It ensures that we get the information and that we follow up with everybody.”

If you are in doubt about which school district you should contact, know that all transportation directors in the tri-county area share correspondence. “We all have real communication and a working relationship. When in doubt, notify one of us,” finished Scott.

If you would like to know more about the rules of the road, visit the South Carolina Department of Public Safety website at scdps.sc.gov.

Untold numbers of people have visited the Lowcountry with an eye toward enjoying the marshes, creeks and beautiful beaches. Luckily, there are great opportunities for fun both underneath and atop … END_OF_DOCUMENT_TOKEN_TO_BE_REPLACED

Enjoy learning how your Mount Pleasant neighbors, business owners and peers manage all of the moving parts in their lives. Look at the cogs turning, gears grinding and axles spinning inside the … END_OF_DOCUMENT_TOKEN_TO_BE_REPLACED

Enjoy learning how your Mount Pleasant neighbors, business owners and peers manage all of the moving parts in their lives. Look at the cogs turning, gears grinding and axles spinning inside the … END_OF_DOCUMENT_TOKEN_TO_BE_REPLACED