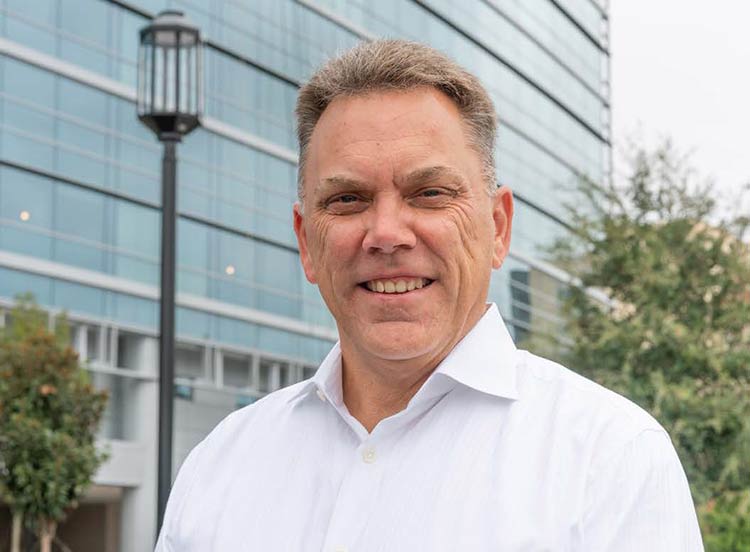 He’ll tell you he’s a volunteer.

And by the way he walks around the lobby and hallways of the new Shawn Jenkins Children’s Hospital, greeting the nurses, construction workers and other staff members, you wouldn’t think anything different.

He stopped and spoke to almost everyone we passed along the tour of this brand new 11-story children’s hospital, complimenting construction workers who were making finishing touches, and always asking if he was in their way. “No, Mr. Jenkins, not at all,” they would reply.

If you didn’t already know this down-to-earth former owner and CEO of Benefitfocus, who donated $25 million to the construction of this new hospital, you would have no idea that it was Shawn Jenkins himself walking around and touring the hospital – something that he said he “loves to do every chance he gets.”

Retired from Benefitfocus in the spring of 2018, he is now a volunteer/donor for a children’s hospital that is sure to offer the most state-of-the-art, innovative and quality care to youngsters that not only South Carolina, but the entire region and possibly the country, have ever seen.

A Mount Pleasant resident and father of five children, ages ranging from 27 to 4-year-old twins, Jenkins empathizes with the parents who will bring their children to this new hospital, for he himself dealt with that when his second child was just a baby.

His now 24-year-old daughter, Olivia, was born in 1995 with torticollis, a fairly common, but alarming condition in which the child’s neck tilts to one side.

“At the time, I was a young guy trying to pay hospital bills for my child,” he recalled. “I was struggling selling cars and copiers. I would work nights and weekends developing a database for my friend Mason Holland, who was working in retirement planning.” Holland would later become Jenkins’ partner at Benefitfocus.

He said that even as a child he always wanted to start his own business. “It was something I always wanted to do and that was why we started Benefitfocus. I wanted to make benefits easier for people to understand and easier for companies to manage. I knew firsthand how confusing it all could be.”

But how did Jenkins end up in the Charleston area to begin with? He grew up in Daytona Beach with a meager upbringing. “I knew if I wanted to go to college I was going to have to find a way to pay for it myself,” he explained.

So, as a teenager he sold pizzas and worked in an aquarium store. He saved enough money to enter a pilot program at Geneva College in Beaver Falls, Pennsylvania. “I always struggled in school, to be honest,” he admitted.

He got a job out of college in Summerville for a ministry organization doing missionary work for medical teams in developing countries. He decided during that time to pursue his master’s degree in business at Charleston Southern University.

And that is when he met Holland.

“I always had an interest in computers, so helping him with a database was great experience for me,” he said. “I did so many odd jobs at that time to make ends meet.”

In 2000, he and Holland opened Benefitfocus, and in 2013, the company went public. Jenkins retired in the spring of 2018, which he said “freed up my schedule to be able to do more for the children’s hospital opening.”

What does that mean exactly? He had already donated $25 million in 2015.

For Jenkins, that meant bringing lunch to the construction crew every so often, managing the fish tank display in the hallway near the cafeteria (since he had worked in an aquarium store as a teenager and had an interest in fish from growing up in Daytona Beach), and just being there in a supportive role for whatever they may need.

“I don’t make decisions here. I don’t work for MUSC and I am not on any board or anything,” he said modestly. “I am just happy to be able to contribute in some way to making this all happen.”

There is one room in the hospital that means the most to him. It is a room that he said has the best view on the 10th floor.

“My brother-in-law died of cancer earlier this year after only being diagnosed last year,” he explained. “We are going to dedicate this room to him with a plaque. It will be the Dan Cardin Room in memory of him.”

As for Olivia, his daughter who suffered with torticollis as a baby, well, she’ll be working at the Shawn Jenkins Children’s Hospital as a nurse in med-surge. “It’s full circle for her and our family in many ways,” he said proudly.

With a few of his personal touches sprinkled throughout the children’s hospital, you may not put two and two together that Jenkins had something to do with that or this over there, but that doesn’t really matter to him anyway.

“Being a part of this hospital is beyond any dream I ever had for myself. It brings so much joy to my life. I just want to help in any way I can.”

For many of us, April 18 represents a looming and ominous deadline — Tax Day. Be it dread of the unknown, anxiety over how to navigate a complicated process, panic about penalties or stress about the … END_OF_DOCUMENT_TOKEN_TO_BE_REPLACED

Retiring from the fourth largest municipality in .the state of South Carolina after nearly 24 years of heading the Town of Mount Pleasant’s communications office is a momentous occasion for me. … END_OF_DOCUMENT_TOKEN_TO_BE_REPLACED

Perhaps you’ve noticed it as you’ve turned off Highway 17 onto Mathis Ferry Road, just past the first traffic circle. More likely than not, you haven’t paid it much attention. But that’s about to … END_OF_DOCUMENT_TOKEN_TO_BE_REPLACED