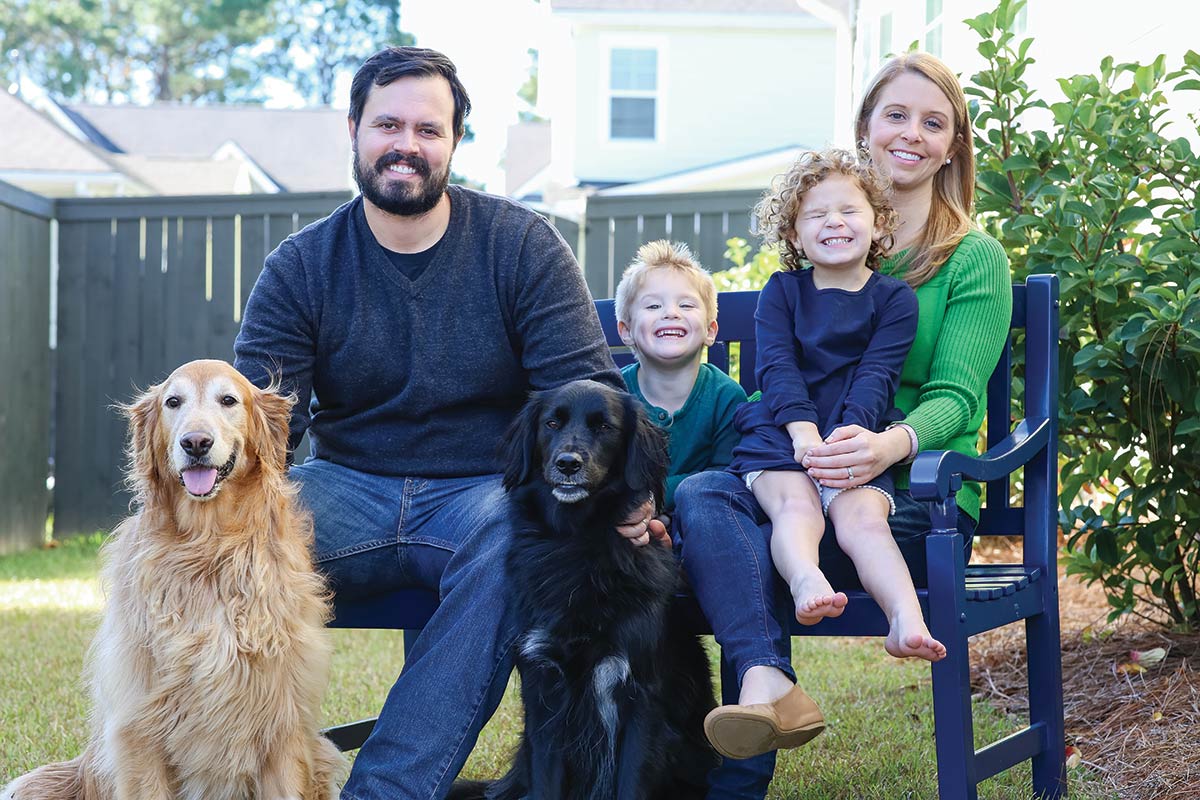 Recall the days of being a young girl or boy, say 5 or 6 years old, playing “house” in your yard with an imaginary family. It came so easily. Or when . you were at school playing “family” or “doctor” or “vet” or whatever you fancied for the day with your group of friends. You didn’t question the roles or where those missing elements were. You felt it all. That baby was yours. You were the mother, that was your sister, that was your dog and cat — and that was your family!

Unfortunately, as we grow older, we lose this magic of imaginary play — or moreover, the magic of accepting circumstances, people and concepts that aren’t seen as traditional in our society. Instead, we are often stuck in a rut of the way things are “supposed” to go for us and pursue it doggedly.

Despite the way the wheels turn in the world, I like to believe several East Cooper families have a bit of magic among them and possess that type of inherent good that is able to spark change in others — that type of good you want to surround yourself with and share with others because, well, it’s just that good.

Meet the Greer family: Kelly and Jason, their twins, Madison and Mason, and the beloved family dogs — Smokey and Bandit.

In my interview with Kelly, we talked big life concepts, and I was blown away: from health challenges to her subsequent book launch to Bandit’s terminal condition to their family’s journey with adoption — this Mount Pleasant family is rolling with the punches, making the best of each situation. … And the results are bigger and better than any contrived scenario.

The Greer family relocated from Reston, Virginia, to Mount Pleasant about three years ago. Kelly moved here to teach at Porter Gaud, and Jason, an engineer, works at RMF on Daniel Island.

Soon after arriving in Mount Pleasant, Kelly was diagnosed with neurocardiogenic syncope (NCS), a condition caused by a drop in blood pressure, quickly followed by faster, then slower, heart rate resulting in poor blood and oxygen flow to the brain — and then a near loss of consciousness. For Kelly, this happens about every day around 8 a.m.

“Essentially you just pass out,” she said. “I’m on a great medication, and my condition is maintained, but it changes your whole perspective. … I moved my beautiful little family to this slow-paced area where they could be near the beach and I could teach, and then my world was kind of flipped upside down when my doctor told me working in the morning was not going to be what was best for me.”

Kelly’s cardiologist at MUSC recommended a job that started at 10 a.m., but Kelly, who has a master’s degree in education, knew that no schools opened at that time. Another challenge was having her children in daycare full time and needing to readjust all their schedules. “I went from thinking I was going to be working full time to (being at home part time) with my kids and only working 10 hours a week.

“I’m so lucky to have my parents around. They’ve really helped us out. This past year was diving deep and finding out the whole life I had planned out for myself was going to look totally different.”

But Kelly’s health hurdle wasn’t the first challenge the Greer family faced. Discussing her and Jason’s adoptive process, Kelly admitted to “ups and downs … a bit of a roller coaster” at the beginning, but, once they connected with Amanda, the birth mom of Madi and Mason, she described it as “meant to be.”

“She sent me the sonogram of the twins the very first night we talked,” Kelly recalled. Amanda was 22-weeks pregnant at the time and invited Kelly to the next appointment — where they found out the genders. They also named the children together.

“Amanda lost her mom when she was 15 years old, and she had grown up in New York with her, and one of the places they would always love to walk was Madison Avenue. So Madison is named after Madison Avenue in New York City,” Kelly said.

For the name “Mason,” with Kelly and Jason living in northern Virginia at the time of the adoption, they would cross the Mason-Dixon line every time they visited or had an appointment in York, Pennsylvania (where the twins were adopted from and where Amanda was living at the time of her pregnancy). … And that’s how Mason’s name was chosen: The Greers and their twins’ adoptive mother were separated by the Mason- Dixon line.

Kelly and Jason even made sure that Bandit and Smokey were acclimated to the babies before bringing them home. “We brought their blankets home and let the dogs smell them. … And Bandit used to sleep with their blankets from the hospital,” Kelly reminisced.

Kelly described the nature of the adoption and relationship as semi-open, as she still keeps in touch with Amanda fairly often, and the children do know who she is.

We just entwined it into our everyday language with them. … Madi has started asking questions more recently, and it’s great because I can text her birth mom and say ‘Hey, Madi wants to know what your favorite kind of ice cream is.’”

Madi and Mason are now pre-K aged and love their dogs, playing outside, going to the beach and riding their bikes in the neighborhood. “Mason loves playing baseball, and Madi loves ballet. … We have this incredible community where we’re surrounded by with all of these pre- K-aged children that they just love to hang out with,” Kelly stated. Madi and Mason’s grandparents also live in Mount Pleasant and surround them with love.

Madi and Mason are also surrounded by wonderful family friends — one of them being Jessi Adams, who wrote a song titled “You Have My Heart” for them. The song is available on iTunes, and all proceeds benefit adoptive families to help offset the cost of adoption.

What is the Greer family up to these days? Acclimating to their new “normal” with a positive outlook and giving Bandit, their first baby, the best life possible in his final days. Kelly is also the author of her new book, “Dogs,” which she has partnered with the Charleston Animal Society in order to give a portion of every book’s proceeds back to dogs in need.

Kelly recalled, “The day after my book launch, the vet did an MRI and found a large mass in Bandit’s brain. … In the room with our two children, she showed us the large mass on the screen and told us he had three to six months, and I thought, ‘That’s not even possible, he’s the star of a book. He can’t have three to six months.’”

Bandit has been a staple in the Greer household through all the major adjustments — moves, Kelly’s NCS and bringing Madi and Mason home, and, through it all, he has had nothing to offer but love.

“Even as rambunctious as he was as a puppy, as soon as I would pass out, he would lie right beside me — completely still, not like a puppy at all,” Kelly said of Bandit’s dedication to her. She continued, “We dropped two tiny little people on him, and he just rolled with it. They learned to stand by pulling up on his fur.

“Bandit is getting chemo right now, and it’s heartbreaking and devastating, but if you can think, ‘If I can just give a little piece of him back to the rest of the world …’ We just have to keep going, even though it’s really difficult.” Bandit receives cheeseburgers, steak and other treats nearly daily to satisfy his appetite and to make him feel extra loved; however, since he’s made it four months thus far, a little “diet” has become necessary to maintain overall health.

When considering matters of life dealing “tricky cards,” the Greers are certainly an example of perseverance, optimism and the will to readjust out of necessity. They simply strive to make the best out of every situation they encounter, and, really, that’s an attitude everyone can learn from.

Kelly explained, “For us, just moving our family and then finding out everything didn’t go as planned … and we kind of had to reset and refocus and try to find something to keep us going. … For me, it was finding a passion I was interested in and giving it a shot. That was writing the book, and so much has come out of that book for me.”

“It’s crazy how it all worked out how it was supposed to,” Kelly said. “Even though in the moment, it is not what you were thinking, or what you thought you wanted. You just have to put your head down, keep moving and know that somehow it’s all going to work out.”

For many of us, April 18 represents a looming and ominous deadline — Tax Day. Be it dread of the unknown, anxiety over how to navigate a complicated process, panic about penalties or stress about the … END_OF_DOCUMENT_TOKEN_TO_BE_REPLACED

Retiring from the fourth largest municipality in .the state of South Carolina after nearly 24 years of heading the Town of Mount Pleasant’s communications office is a momentous occasion for me. … END_OF_DOCUMENT_TOKEN_TO_BE_REPLACED

Perhaps you’ve noticed it as you’ve turned off Highway 17 onto Mathis Ferry Road, just past the first traffic circle. More likely than not, you haven’t paid it much attention. But that’s about to … END_OF_DOCUMENT_TOKEN_TO_BE_REPLACED