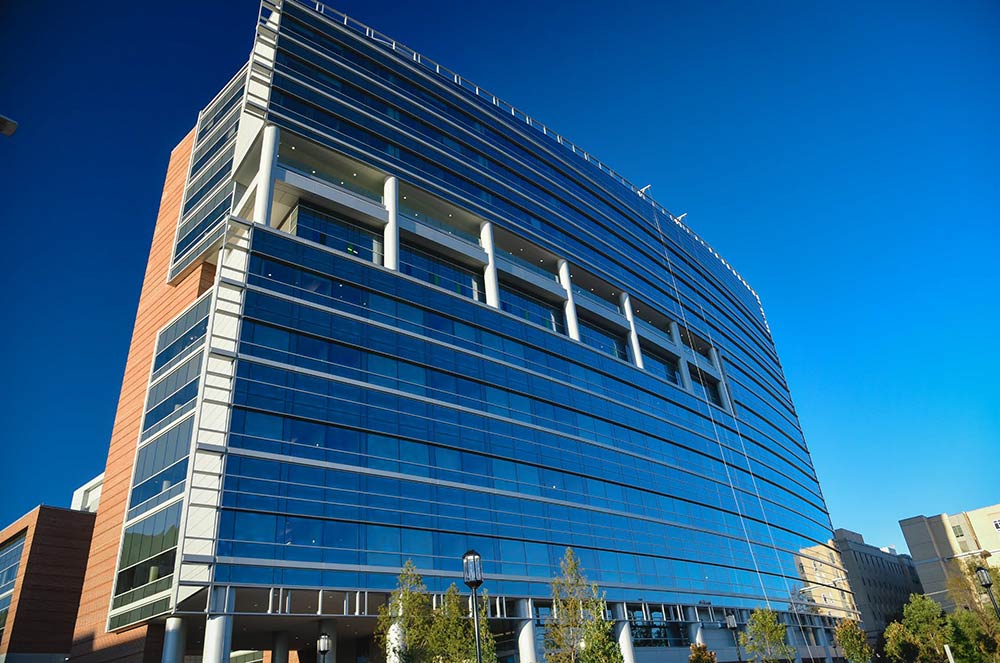 You have to look down to enjoy the design on the hallway walls of the brand-new, soon-to-be-open, Medical University of South Carolina Shawn Jenkins Children’s Hospital. Why? Because the artwork is at the eye level of a child, of course.

And the aquariums that welcome hungry visitors to the cafeteria on the seventh floor are managed in partnership with the South Carolina Aquarium, a favorite destination among visiting and local children alike.

There’s a 3,200-square-foot indoor playground, donated by the Jerry and Anita Zucker Family, and 10,000 square feet of outdoor playground, donated by Boeing, providing much-needed fresh air, swings, plenty of room for bike riding, a movie screen and much more. There’s a game room for teens and pre-teens, other smaller playrooms on every floor, well-intentioned “haint” blue paint, signature to Charleston porches, on the bays above the entrance to the medical-surgical rooms, and there’s a theme for every floor too.

In keeping with the Lowcountry landscapes theme of the seventh floor, Bob Hines designed the chapel with a fused-glass representation of the Angel Oak tree on Johns Island.

And, for example, the cardiac floor, is the beaches and marsh floor because marshes resemble the arteries to our hearts. It was this kind of thought process that set the tone for the entire planning and implementation of the new children’s hospital, located off Calhoun Street in the heart of the downtown Charleston medical district. 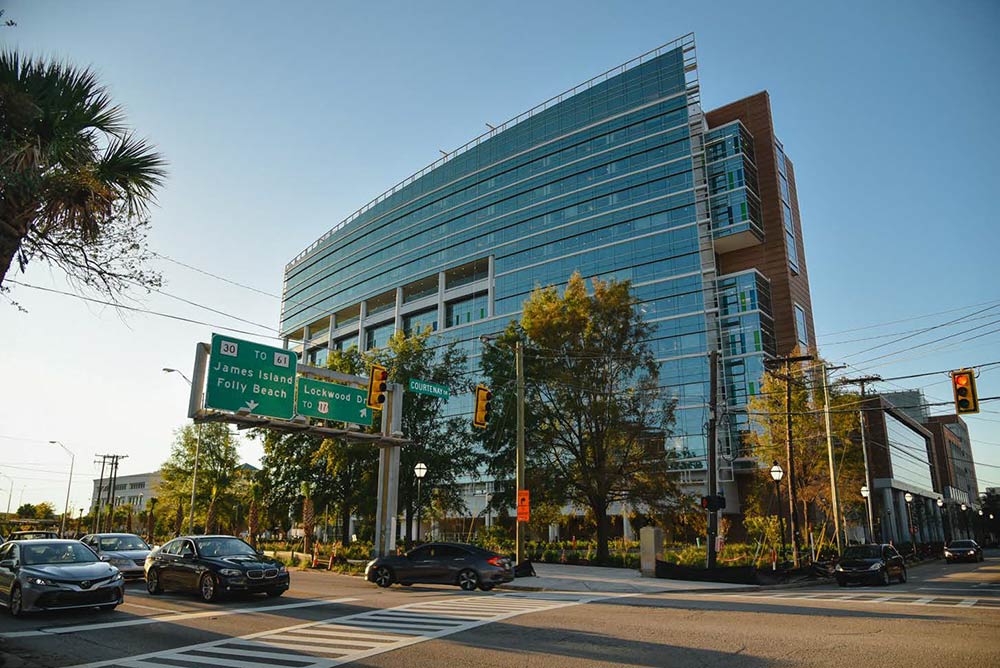 There’s an expansive view of the Ashley River from every room in the patient tower, every nurses’ station and even from the dishwasher’s station in the cafeteria. Natural light abounds, a contrast to the usual drab fluorescent lighting found in most hospitals.

You can’t miss this glass building that totals 11 stories, which has enhanced the Charleston skyline as you drive onto the peninsula from James Island or West Ashley. It totals 624,000 square feet and has now become recognized as the most expensive building in the state, just short of $400 million.

There are 250 licensed beds, a 20% increase from the old hospital, 29 mother/baby postpartum rooms in labor and delivery, all of which have access to kitchens, laundry facilities, showers and plenty of places to lounge when respite is needed.

Dr. Mark Scheurer, the hospital’s chief medical officer and clinical lead for the project, said that it was five years ago when MUSC started the legwork of trying to make this dream a reality.

“We knew our current children’s hospital wasn’t able to provide the type of environment that our families and patients deserved,” he said. “We needed a place where we could expand services for our community. This hospital does not just serve local families, it is for families from all over the state and Southeast.” 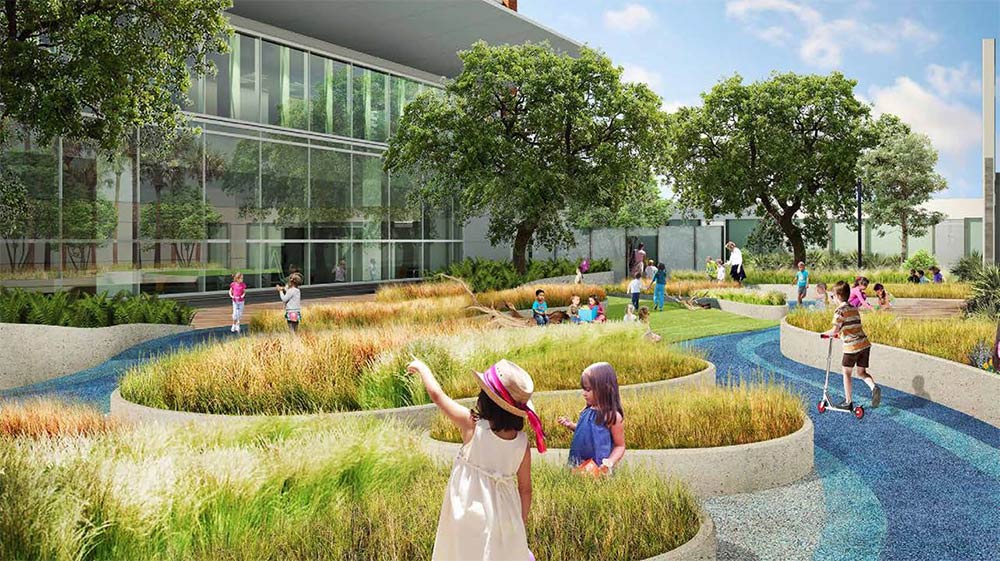 What makes this hospital different than most other children’s hospitals in the country is the team of people that came together to make it happen. Sure, they had a well-renowned lead architect, Perkins+Will, but it wasn’t the architects that planned the layout. It was medical professionals, clinicians and family members of the children who have been treated at the current MUSC children’s and women’s hospital. These teams met with the architects for 18 months before ground breaking took place. The result? Probably the safest, most sensitive and thoughtful hospital in the country.

Construction workers were even part of the process. Dr. Scheurer said that they knew what the building was going to be and took great pride in their work. More than 4,000 of them will have been involved in the building process in some way when all is said and done. “Many of them told us that they had a connection of some sort to the MUSC children’s hospital,” he explained. “Either they had been cared for there in the past or had a child who was. It has been amazing to hear these stories.”

And “stories” there are plenty of. While clearing the space for the Shawn Jenkins Children’s Hospital, work crews found cypress pilings that had supported the city’s old County Hospital. Justin Herrington, who owns Born Again Heartwoods in Meggett, was hired by MUSC to reclaim the found wood.

They would use the wood as beams in the entryway that leads to the outdoor playground and as arches in the lobby. Little did they know that Herrington actually had a personal past with the MUSC children’s hospital.

Herrington was accidentally shot in the leg at age 14. It was the doctors at the MUSC children’s hospital that saved him and his leg about 25 years ago after undergoing nearly a dozen surgeries and spending an extended period of time in the hospital.

And then there is the story of the mother who lost her critically ill infant and said she would have given anything to have a half-hour alone with her baby.

Dr. Scheurer said that they were going to build about four open bays for critically ill babies and that the team of doctors planning this all felt it was the best care model.

“After we received that mother’s letter stating that she would have given anything for that time alone with her baby, we put a halt on those plans for open bays and there was no question that private rooms were the best way to go,” he said empathetically.

And then there’s the mother who has a child with a heart condition. She is on the planning committee for the menu in the cafeteria. She wants there to be options for people who are on strict and unique diets.

That leads to the reason why the cafeteria is on the seventh floor. Dr. Scheurer said that most hospitals have the cafeteria on the first floor. “It takes longer to get down there, which keeps parents or other loved ones away from their child for just that much longer. This way, they don’t have to go far. It is in the middle of the hospital. They won’t be far away from their kids to get a bite to eat.”

Each floor was thought out in great detail. The 10th floor will house the most critically ill children who are there for longer periods of time. “They’ll have the best views in the hospital. They deserve it,” Dr. Scheurer said.

Labor and delivery is on the fourth floor. It is tastefully decorated with Charleston classics like sweetgrass basket art and beach paintings.

Dr. David Soper, medical director for women’s health, said, “Our goal is for The Pearl Tourville Women’s Pavilion to be the safest labor and delivery unit in the country. We recognize that this depends on the connectivity with our onsite specialists and maternal fetal medicine physicians. Our team of doctors, nurses and support staff is highly motivated to provide a most caring experience on our high-tech unit. Moreover, we are backed up by world-class pediatric subspecialists such as pediatric cardiologists and cardiac surgeons as well as experienced pediatric urologic and ENT surgeons.”

He added, “Our advanced fetal care center makes caring for high-risk pregnancies seamless with our pediatric subspecialists needed by the newborn after delivery.”

While newborn “rooming in” is the MUSC standard, Dr. Soper said they will also offer “couplet care” for those mothers delivering infants requiring intensive care in the neonatal intensive care unit. “This way, the mother rooms with her baby while the highest standard of ICU care is rendered to her newborn infant.”

A special elevator has been designated the “Stork Elevator,” which is reserved for those pregnant patients requiring evaluation on labor and delivery. This elevator rises directly up to labor and delivery where the patient is met by nurses and staff and guided to a waiting triage room. Wireless monitoring is available for patients as they labor, freeing them to position themselves in a comfortable way and ambulate during labor.

Dr. Soper considers the Pearl Tourville Women’s Pavilion a high-caring, high-tech unit. He envisions the patient and baby at the middle of a circle, surrounded by a special group of providers, arms linked with one goal in mind: “Keeping our patients safe and sound.”

And we would be remiss if we did not mention the technology that the planners of the hospital had specially made for it.

Dr. Scheurer said that there will be a large screen in every room with all information needed in one place. “We had to build partnerships with software companies to create this,” he said.

The screen will include information about all the rounds made so that parents can review what has been happening. Even loved ones not present can log into this program to review from afar.

This screen will have FaceTime ability, as well as the ability to watch regular TV and movies. People can even access the internet.

“When a staff person walks into the room, a sensor will activate on the screen to introduce who the person is,” he said. “This is truly unique and different. It was our vision that we wanted to make into a reality.”

Dr. Scheurer concluded, “This is not our hospital. It is the community’s hospital. So many people have intersected to share their stories. They are invested, they care and support it. This hospital will be around much longer than all of us. It is that bigger picture that we have to think about. It has been truly an honor to be a part of it and I know I speak for many when I say that.”

For many of us, April 18 represents a looming and ominous deadline — Tax Day. Be it dread of the unknown, anxiety over how to navigate a complicated process, panic about penalties or stress about the … END_OF_DOCUMENT_TOKEN_TO_BE_REPLACED

Retiring from the fourth largest municipality in .the state of South Carolina after nearly 24 years of heading the Town of Mount Pleasant’s communications office is a momentous occasion for me. … END_OF_DOCUMENT_TOKEN_TO_BE_REPLACED

Perhaps you’ve noticed it as you’ve turned off Highway 17 onto Mathis Ferry Road, just past the first traffic circle. More likely than not, you haven’t paid it much attention. But that’s about to … END_OF_DOCUMENT_TOKEN_TO_BE_REPLACED