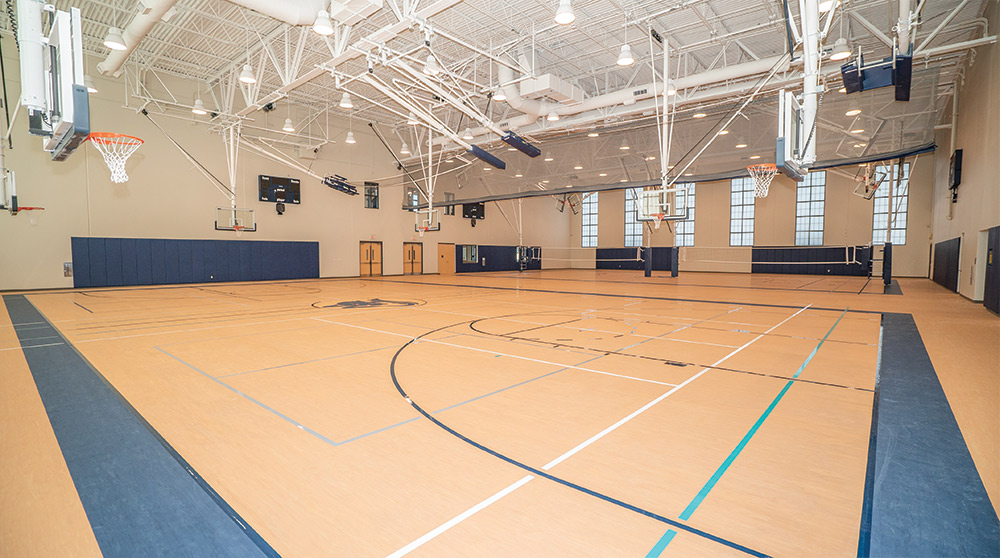 An array of recreational activities, from basketball and volleyball to sock hops and pickleball, have returned to Mount Pleasant’s Town Hall complex — and there are more improvements on the way.

The town’s new gymnasium officially opened its doors in April, 15 months after ground was broken where Police Department headquarters and the town’s old gym once stood. Those buildings were razed in August 2017, shortly after the nearby Town Hall was completed.

“With the demolition of the old Town Hall Gym in the summer of 2017, the Mount Pleasant Recreation Department has been limited in its ability to meet the indoor court needs for our programs,” said Steve Gergick, the town’s recreation director since April 2017.

That will no longer be a problem for the town, which had been using the gymnasiums at Trident Academy and Oceanside Collegiate Academy, as well as its Park West facility, since the old gym was demolished.

The new, 25,000-square-foot Town Hall Gym was built at a cost of $6.144 million by Charles Blanchard Construction Company of North Charleston. Stubbs Muldrow Herin of Mount Pleasant served as the architect for the project.

According to Gergick, the new gymnasium was modeled after the facility at Park West, with a few modifications. For instance, the town chose to push a wall back 10 feet to accommodate four volleyball courts instead of two. And, depending on which lines on the floor you pay attention to, the Town Hall Gym features two full-sized basketball courts and four smaller courts for younger kids, where the baskets can be lowered from 10 feet to 8 feet. The old gym had one basketball court and one volleyball court. 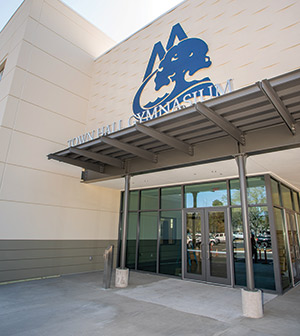 There also will be four pickleball courts, and fans will be able to watch all the games on portable bleachers.

The basketball goals, volleyball nets and a wrestling mat all can be raised off the floor and stored under the ceiling.

The new gym, which serves the needs of the town of Mount Pleasant’s vast recreation program, also includes locker rooms, showers and a small office. One of the most welcome additions is the bathrooms that are now available to fans and participants who use the adjacent quarter-mile track and football and lacrosse field, “a nice feature” of the new building, according to Gergick. Even if the gym is closed, whenever events are taking place on the field, the restrooms will be available through a side door. Until the new gym opened, those using the track or field had only one choice when nature called: a portable toilet.

Additional work is currently in the design stage. Gergick said the track will be torn up and replaced by one with a rubberized surface, and new lights will be installed, including low-level lighting that will benefit those who walk or run on the track after sundown. There will be no concession stands, but Gergick said food trucks would probably be available.

People who live nearby also will benefit from the improvements.

“The new surface will be appreciated, and the neighbors will be thrilled to death with the new lights,” Gergick said.

The new gymnasium will host basketball leagues for kids as young as 5 years old all the way up to seniors in their 80s, as well as volleyball leagues for fifth graders and middle schoolers — along with a boys volleyball league that was established this past year. There also is a wrestling program for 5- to 13-year-olds. Pickleball lessons will be available, and the gym hosted Mount Pleasant’s second pickleball tournament in April.

Gergick said there will be open gym time, when local residents will be able to shoot hoops and participate in other activities when no league games are scheduled.

The town’s recreation director pointed out that the new gymnasium was built using the tilt-up construction method. Large panels, built on-site, were then lifted by cranes to create the building’s walls. Security, data and electrical lines were built into the panels. According to Construction Superintendent Nick Ackerman, the heaviest panel, 32 feet wide by 31 feet, 2 inches wide, weighed 134,770 pounds. The smallest panel, 5 feet, 8 inches by 14 feet, 10 inches, weighed 11,640 pounds.

“The new Town Hall Gym will improve the town’s ability to facilitate some of our fastest-growing and most popular activities,” Gergick said. “And we are also excited about bringing sock hops back to Town Hall.”

Untold numbers of people have visited the Lowcountry with an eye toward enjoying the marshes, creeks and beautiful beaches. Luckily, there are great opportunities for fun both underneath and atop … END_OF_DOCUMENT_TOKEN_TO_BE_REPLACED

Enjoy learning how your Mount Pleasant neighbors, business owners and peers manage all of the moving parts in their lives. Look at the cogs turning, gears grinding and axles spinning inside the … END_OF_DOCUMENT_TOKEN_TO_BE_REPLACED

Enjoy learning how your Mount Pleasant neighbors, business owners and peers manage all of the moving parts in their lives. Look at the cogs turning, gears grinding and axles spinning inside the … END_OF_DOCUMENT_TOKEN_TO_BE_REPLACED