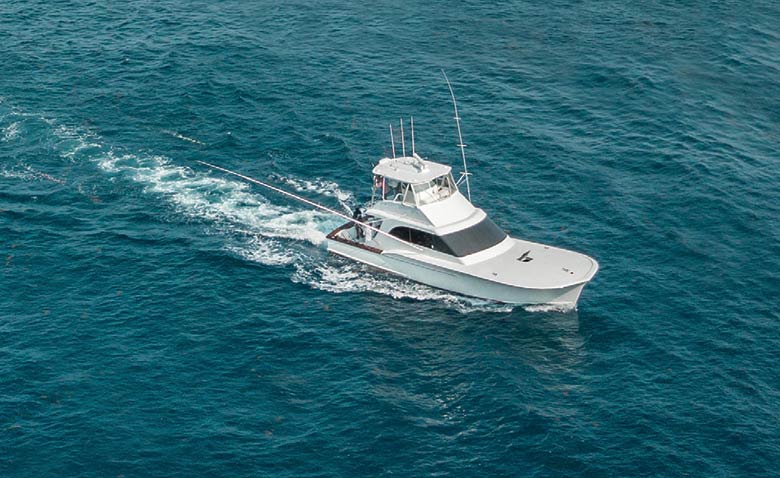 The burn of sunscreen sweating down into my eyes battles with the burn in my left forearm for the moment’s top pain. The captain yells down from his deck, “Don’t make me tell everyone that the writer lost the best fish of the day!” The mates and crew chuckle.

I’ve been fighting, in the most literal sense, with a monster mahi-mahi for at least the last 25 minutes. “This fish certainly does not want to die,” I spit through a wide grin as the animal sees the boat and dives another 15 meters.

By this point, I’m forced to take incremental breaks by holding the rod in my right hand for a few moments while the cramps in my left arm clear. We are 60 miles from the closest land — Charleston Harbor — and surrounded by shades of blue water and sky. There is a certain energy on the boat that I can liken to when Williams Brice Stadium played “Sandstorm” prior to the Gamecocks SEC home opener.

The fight with my mahi-mahi is exhausting and inspiring. The apprehension of losing such a fish is outweighed by a primal instinct to bring it on board. Which, in the end, I do.

Stuart Lackey is the captain of the 54-foot Jarret Bay fishing vessel named The Renegade. The craft itself is a spectacle. When someone aboard posed the hypothetical question, “If this boat was yours and you could change anything about it,” the consensus was to change nothing.

Captain Stuart is framed by a steady and consistent approach to deep-sea fishing because, “when you’re 60 miles offshore, it’s not a guessing game — mistakes can be costly,” the captain noted.

Morning after morning, the angler wakes up at 3 a.m. to join his crew — including his son, Stratton, who is pictured on this issue’s cover — in chartering folks from Shem Creek to the open waters off Charleston’s coast.

“One thing about Captain Stuart is he’ll put you on the fish,” said Bax Culler, who was on the charter along with Mount Pleasant Magazine.

Culler and two friends work in the logging industry outside of Charleston and have chosen to invest in weekly trips with Captain Stuart because, well, “he knows where the fish are.”

As the early morning dark gave way to the sun’s cornering of the horizon that June morning, our depth finder hovered around 300 feet. The Renegade’s engines roared pushing the vessel further from the Charleston coastline. We had been running for 90 minutes and still had another 90 in front of us before it would be time to drop our lines.

“Out here you are looking for features,” said Captain Stuart.

Once the boat passes the continental shelf and 300 feet turns to 1000 feet deep, the fish no longer hunt on the bottom. Instead fish will hang around objects floating in the water, namely seaweed lines which provide cover for smaller fish and hunting grounds for larger ones. In May, a Charleston fishing vessel also found around 50 kilos of abandoned cocaine on a seaweed line about 60 miles from Shem Creek, but I’m guessing that’s a different weed line than the one we were searching for.

At just over three hours from shore, Captain Stuart spotted a massive seaweed line that spanned over a mile. “We could search all day and not find a line like this,” one crew member exclaimed as excitement heightened.

Before I could ask any further questions, the team of anglers began dropping lines, teasers and outriggers off the back of the boat. We initiated trolling, and all sat anxiously eyeing the rod tips.

Between sunflower seed spits, Culler chuckled, “You know, when we are 60 miles offshore and 1300 feet deep, in this boat you’re at the top of the food chain, but, in the water, you’re going to drop down a few levels!”

Suddenly I heard “zzzzzzzzzzz” as an outrigger line popped and the rod tip began to bend. “Fish on!” the whole boat yelled simultaneously. From there, the group was like a well-oiled machine — reel fish to the boat, gaff the fish, throw it in the cooler, tie another ballyhoo to the rig, throw the line back in the water! Repeat.

Within an hour, we had a dozen fish in the boat, and, within two, the fish total had doubled. Little time was left for drinking beer and listening to country music, but, hey, we still had a three-hour ride back to the dock!

To truly get a complete Charleston fishing experience, I couldn’t limit myself to just a deep-sea trip. I had to fish the inshore rivers that surround our barrier islands. So, I called inshore expert Captain Ben Powers of Reel Time Charters.

At 23, Captain Powers has fished more than most of us will in a lifetime. Fishing around 300 days per year and scouting most of the rest offers the angler a truly intimate concept of how the inshore Lowcountry waterways work.

“It’s all about the tide,” said Captain Powers. “We will fish different areas, different bait or lures, based off what the tide is doing.”

The Charleston tide rises and falls about 6 feet every 12 hours, causing the bait to constantly move, and, where the baitfish go, the game fish will follow.

Like any avid fisherman, Captain Powers has his spots where he is confident fish can be caught. He elaborated, “When you’re fishing inshore estuaries, you’re always looking for the same sort of places — smaller tributaries dumping into the larger rivers, structures like docks and pilings, or oyster beds.”

About an hour into our trip, we exited Folly River and headed toward Sandy Point (Kiawah) and the Stono River. “This spot looks fishy,” Captain Powers noted as we approached a riverbank with a smaller river feeding into the Folly.

I tossed my line equipped with a live shrimp, 4-foot leader and bobber into the murky waters. About 90 seconds later, the line tightened, and my drag squealed. I was in for another fight!

After a 10-minute battle, he reached over the gunnel and hoisted a 15-pound bonnethead shark into the boat. Looks like shark steak tonight!

People are drawn to the Lowcountry in large part because of the beaches, the salt marshes, the moss-draped oaks, the cypress swamps — the stunning natural landscapes that inspire awe and support an … END_OF_DOCUMENT_TOKEN_TO_BE_REPLACED

Click, Listen, Watch & Learn. Doug Holmes, "The Stats Guy" crunches and studies statistics in many fashions including the MLS in Charleston talks with host and publisher Bill Macchio about the … END_OF_DOCUMENT_TOKEN_TO_BE_REPLACED

John Powell, CEO and President of the Southeastern Wildlife Exposition (SEWE) talks with host Brian Cleary about the expo's art show featuring local and regional artists, and Powell talks about other … END_OF_DOCUMENT_TOKEN_TO_BE_REPLACED