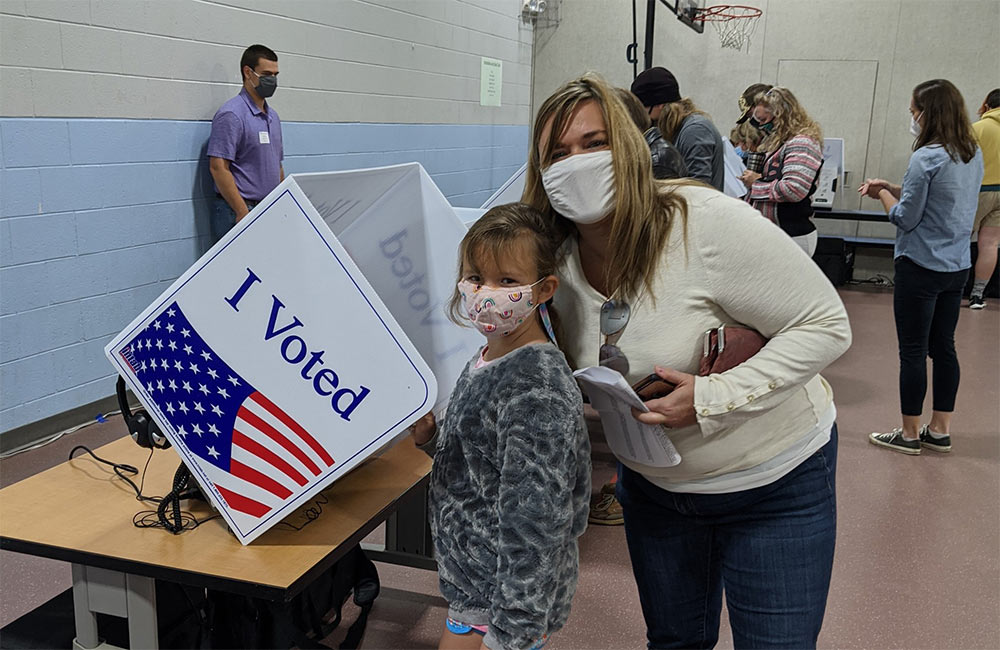 On November 3, 2020, 8-year-old Stella Rasheed accompanied her parents on a top-priority mission. It was not her first experience of this kind, but she was both pleased and excited to be included again. Although the first part of the journey involved standing in line for over an hour without complaint, Kristie Rasheed had warned her daughter in advance, and she handled the wait stoically. Soon enough, Stella was finally able to enter the designated Mount Pleasant voting precinct to observe her mother and father shoulder their civic duty as they voted.

For Stella’s parents, educating their daughter about the rights, privileges and responsibilities of American citizenship is a critical piece in preparing her to become actively engaged in her world when she is older. Kristie Rasheed is adamant: “If you don’t like something or want to change something, you can just sit there and complain, or you can get up and do something that could make a difference.”

Martin Luther King Jr. echoed a similar sentiment: “Our lives begin to end the day we become silent about the things that matter.” For Rasheed, the complacency she has observed in many young people is disturbing. Since doing nothing is simply not an option, this mother believes that teaching her daughter how one participates in the governing processes of the country while she is young will benefit her. Both parents purposefully try to model responsible citizenship by inviting their daughter to join them in discussing current events, in viewing a limited amount of television news content and in exercising their civic responsibilities.

Like most children her age, Stella doesn’t really understand the barrage of protesting, violence and anger that is so prevalent today. Her parents are careful to protect her from too much emotionally damaging exposure. However, she has grasped the message that when you don’t like what is happening, you don’t need to burn down a building — you can vote for new leaders and new policies. Your vote can improve your community or neighborhood. Voting can advance education, tell the government how to spend your money and protect the environment. Your vote will count because elections have been won or lost by a single ballot.

At her young age, Stella probably knows little yet of the Suffrage Movement or of the 19th Constitutional Amendment that guarantees American women the right to vote. However, almost a century later, she is able to watch and learn as her mother exercises that hard-fought right to be heard.

President Dwight D. Eisenhower once warned, “The future of this republic is in the hands of the American voter.” In this light, educating our youth about the rights and responsibilities of American citizenship seems like a very sensible thing to do. Knowing that our Constitution guarantees elections to the American people to protect their freedoms and independence is something everyone should understand – even including 8-year-old students such as Stella.

Rebecca Imholz, Director of the Mount Pleasant Chamber of Commerce talks with host Brian Cleary about the 2nd Annual Dine Where You Live Campaign which is a proactive reaction by Mount Pleasant to … END_OF_DOCUMENT_TOKEN_TO_BE_REPLACED

For many of us, April 18 represents a looming and ominous deadline — Tax Day. Be it dread of the unknown, anxiety over how to navigate a complicated process, panic about penalties or stress about the … END_OF_DOCUMENT_TOKEN_TO_BE_REPLACED

Retiring from the fourth largest municipality in .the state of South Carolina after nearly 24 years of heading the Town of Mount Pleasant’s communications office is a momentous occasion for me. … END_OF_DOCUMENT_TOKEN_TO_BE_REPLACED