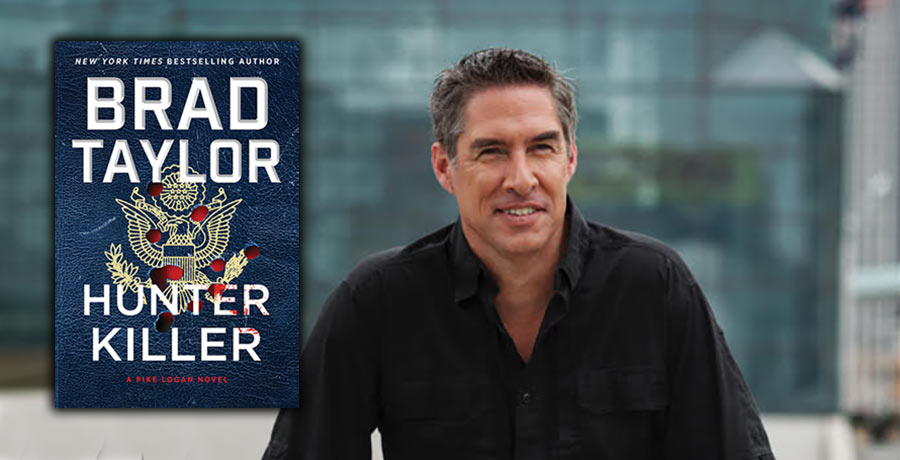 Did you know that a U.S. Army Special Forces hero and bestselling author lives here in Mount Pleasant? With more than 3 million books sold, prolific novelist Brad Taylor is at the top of his game — and we managed to catch up with him and his wife upon their return from a research trip to the Far East, the locale of his most recent work. Taylor’s latest, “Hunter Killer,” was released January 7, 2020.

For 21 years, this slim, muscular Special Forces commander served our country, conducting military operations all over the world: Iraq, Afghanistan and many other classified locations. He retired as a lieutenant colonel, and his last role was as a professor at The Citadel. It was during that comparatively calm time, Taylor said, that he tried his hand at writing fiction.

Like the author himself, Taylor’s protagonist travels to troubling spots all over the world. From his debut book, which takes the character Pike Logan, along with his cohort Jennifer Cahill, to Guatemala where he saves the world from a Mayan superweapon, to “All Necessary Force” with its action in Egypt, there is no shortage of action in Taylor’s 12 more (and counting) books.

With a strong, and equal, readership of both men and women following Logan’s every move, Taylor admitted, “Pike Logan is an amalgamation of men I’ve served with. He’s certainly not me.” In fact, Taylor noted that the main difference between himself and the protagonist is Logan’s innate, natural talent at combat. Equating it to the PGA tour, Taylor explained that the hero is at the Tiger Woods level — the top one percent.

Taylor brings the excitement to Charleston in his next-to-last book, “Exit Fee,” which features action ranging from South of Broad to Folly Beach. Having spent every summer here as a youngster — his parents grew up in Mount Pleasant — and later visiting his twin brother when he was a student at The Citadel, the author knows the area very well. And although Taylor was raised in Texas, he has always been drawn to this area where he lives with his charming, super-efficient wife, Elaine, and two daughters. Elaine, whose father had a career in the Air Force and was always on the go like Taylor, is a true partner who plans all the book launches and tours. She even commissions a cake each time designed to be an exact replica of the latest book cover.

The launch party for Taylor’s seventh book, “No Fortunate Son,” was held at The Shelter Kitchen and Bar on Shem Creek, a familiar locale which is mentioned in the book. “It’s more than just a restaurant to me,” said Taylor. “The land the restaurant sits on was my grandfather’s oil company back in the day, where he refueled the shrimp boats, and also where I played as a child. Pike Logan’s fictional office is right next door, and that’s not because I was just looking for a spot to pick. It was because it meant something to me.”

Taylor’s newest book, “Hunter Killer,” takes place primarily in Brazil, although there is a bit of action right here at Fort Moultrie, as well as even a few scenes set in downtown Charleston.

Not only does Taylor keep a journal and take notes wherever he goes, but he insists on visiting the exotic locales he writes about. “Google Maps can only take you so far,” said the globe-trotting author.

Hero Heating and Air Nominating Category: Best Heating and Air Company Justin K. Acree, Chief Operating Officer What is it like working with the Mount Pleasant community? Working in the … END_OF_DOCUMENT_TOKEN_TO_BE_REPLACED

Historic Georgetown, South Carolina is the cozy town you didn’t know you were looking to find. Located about an hour north of Charleston, the historic port city at the heart of the Winyah Bay sits … END_OF_DOCUMENT_TOKEN_TO_BE_REPLACED