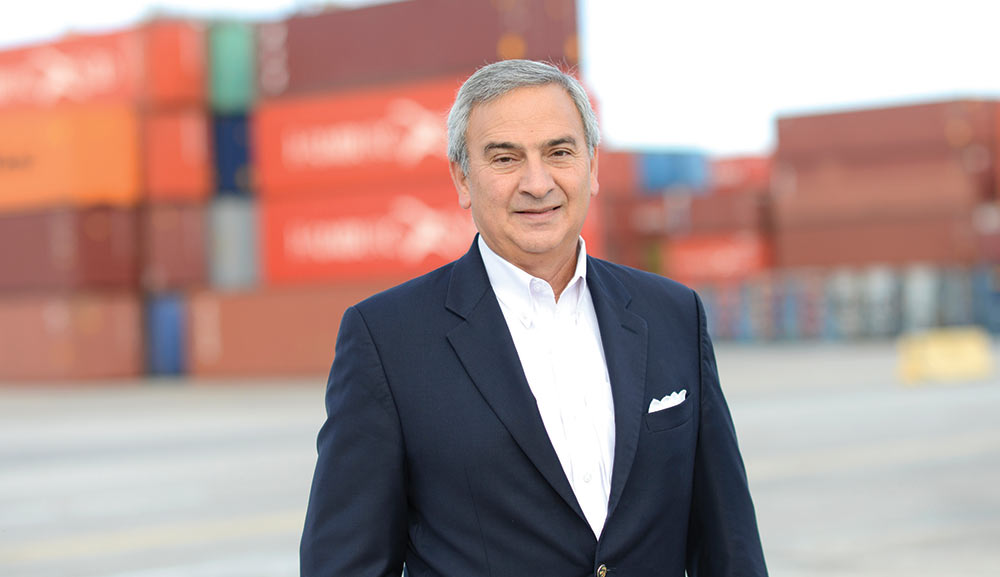 Remember Charleston before the back-to-back tour buses and the magazine spreads on cute inns? It was a city adrift. Even the port, which can anchor a waterside community, was down.

That is, until Jim Newsome.

In September 2009, Newsome moved to Charleston to take over the South Carolina Ports Authority. The turnaround in the economy has been echoed by the port growth, and Newsome has overseen the doubling of container volume — 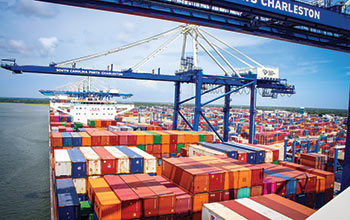 containers are those big metal boxes you see moved from truck to ship and vice-versa. He has also overseen large growth projects, including upgrades to the Columbus Street Terminal in downtown Charleston and the Wando Welch Terminal in Mount Pleasant, as well as building the Hugh K. Leatherman Terminal in North Charleston and deepening the harbor.

Newsome said he was drawn to ports early in life.

“I grew up in Savannah, and my dad was the number-two person at the Georgia Ports Authority. I used to work with him on Saturdays, and I went to college to major in transportation,” he said.

In the transportation field, promotions mean relocations, and when a headhunter friend urged Newsome to explore Charleston, he was ready to settle down — even at a port going through hard times.

His experiences in Charleston have helped Newsome navigate the coronavirus.

“It’s had a significant impact,” he said. “We were having a record year, and then the Chinese shut down manufacturing due to Wuhan, and then, just as they were getting the virus under control, the Western world shut down its economy. Since April, volumes have been down about 15% year on year. Fortunately, the maritime and trucking industries were identified as essential, and we’ve been working all along.”

Normally, the cargo is about 60% imports of finished goods, such as power tools, and about 40% exports of plastics, agricultural and forest products, chemicals and, of course, automobiles — such as the BMWs any casual observer can see parked at the downtown harbor.

“We do about 80% containerized, about 15% roll-on, mainly with cars, and about 5% cruise business,” Newsome said.

But that’s during normal times, and lately, times have been anything but normal. There has been an uptick in “blanked” sailings, or when a ship scheduled to arrive is pushed to a later date. Newsome said only about 11% of the normal sailings have been blanked from February to June.

Still, it’s not all bad news.

“We’re a naturally socially distanced environment because most operators are in cranes and lift machines all day, and the way we receive and dispatch trucks was converted to remote about five years ago,” Newsome said. “We are well-prepared, wittingly or unwittingly.”

The ports have been ranked as efficient, as well as one of the best places to work. The two rankings are no accident and are complementary.

“In the maritime community, you’ll often meet people who are second or third generation. It’s a tradition. Once I stabilized [the financials], I initiated a culture moving from command-and-control to much more participative,” he said. “You have the right technology and well-trained people, and for me as CEO, I never have to worry because the place almost runs itself. That’s the secret sauce.”

Still, Newsome’s tenure has not been without controversy. Not everyone has been thrilled with port growth. Deepening the harbor was delayed by a bidding dispute — which has since settled — and concerns from environmentalists worried about the impact of the dredging, as well as from those who did not want our quaint harbor overshadowed by larger ships. Others were concerned about the influx of cruise ships and the waste and noise they bring.

“I think the port is very responsive environmentally,” Newsome said. “We made a harmonious arrangement with environmental interests locally to protect some land in the East Cooper Watershed. We have electric cranes and hybrid engines. The most important thing a port can do for environmental quality is to make sure trucks don’t idle on the terminal. We make trucks get in and out fast. The cruise ships don’t discharge waste in the harbor. No doubt that a port like this has to coexist with a great community to make sure quality of life is good.”

Newsome dismissed another controversy — Charleston’s desire to impose a head tax on cruise ship passengers to offset infrastructure burdens the influx of tourists puts on the city. But the port is state-run — not city-run — and cities cannot tax interstate commerce, he said.

“Our cruise port is state-operated, so we charge a passenger fee to the cruise line and pay the city for off-duty police officers. There’s no valid argument for a head tax,” he explained.

Newsome’s dexterity at running the port despite controversies is one of the reasons he will be inducted into 2020 International Maritime Hall of Fame, although the ceremony was postponed because of the pandemic.

“They’re planning on having it in September, but I wouldn’t bet my paycheck that the ceremony is going to happen,” Newsome said, adding that the New York gathering attracts 500 to 600 people, something increasingly rare during coronavirus times.

Even while waiting for the induction, he is likely to be busy.

“I’m highly motivated, and I always will be. It’s kind of my nature. When you’re constructively restless, you always find something to do,” he concluded.

His “constructive restlessness” makes him as unlikely to idle as a cargo ship at port.

Rebecca Imholz, Director of the Mount Pleasant Chamber of Commerce talks with host Brian Cleary about the 2nd Annual Dine Where You Live Campaign which is a proactive reaction by Mount Pleasant to … END_OF_DOCUMENT_TOKEN_TO_BE_REPLACED

For many of us, April 18 represents a looming and ominous deadline — Tax Day. Be it dread of the unknown, anxiety over how to navigate a complicated process, panic about penalties or stress about the … END_OF_DOCUMENT_TOKEN_TO_BE_REPLACED

Retiring from the fourth largest municipality in .the state of South Carolina after nearly 24 years of heading the Town of Mount Pleasant’s communications office is a momentous occasion for me. … END_OF_DOCUMENT_TOKEN_TO_BE_REPLACED